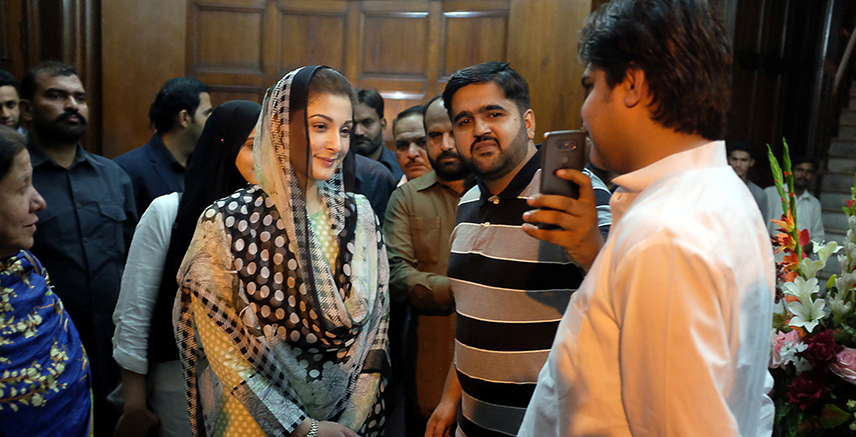 Share on:
After a dramatic fall from power in July, Pakistan's longest-serving prime minister in history, Nawaz Sharif, faces indictment on Friday October 13 for corruption and graft charges.

In the gift that keeps on giving, or the political curse that keeps on castrating, the Panama Papers are continuing to affect politicians and businesspeople around the world.

For a scandal that broke in April 2016, the Panama Papers phenomenon shows no signs of abating; this week alone it has seen politicians from Argentina to India attempting to justify extravagant purchases, properties, or holdings revealed by the leaks.

Yet the biggest name to be implicated so far has been Pakistani Prime Minister Nawaz Sharif, the thrice-elected Punjabi political heavyweight who, despite long intervals between power, has still been the country’s longest-serving prime minister in history (1990-1993, 1997-1999, 2013-2017).

This time his fall from grace came about because of a clause added to the constitution by his political mentor, rightwing military dictator Muhammad Zia-ul-Haq.

This item requires MPs to be both “honest and sincere,” making Sharif’s downfall almost unique in the annals of Pakistani politics; rather than preventable death or assassination his latest was triggered by little more than well-documented corruption.

Outed by the Panama Papers for holding offshore accounts, he was forced to resign by the Pakistani Supreme Court in late July after being convicted of a number of small crimes and misdemeanors.

Voting unanimously, the court not only banned him from politics for life—a real stinger for someone whose family has dominated the Pakistani right for decades—but has also targeted various family members, including his sons Hassan and Hussein, his daughter Maryam, and his son-in-law Mohammad Safdar.

Their indictment is now scheduled for Friday October 13 and will determine whether or not Sharif will actually serve time in addition to forfeiting his political career.

Given that his children are in London while their mother undergoes treatment for throat cancer, it is not clear whether the whole family will be present in Islamabad for the indictment.

That said, upon reaching Islamabad from London early Monday morning, his son-in-law was immediately arrested. He and his wife Maryam were expected before an anti-graft tribunal later that day, which Maryam was permitted to attend sans preliminary arrest.

Both were later granted bail, a privilege not accorded by the courts to either of Sharif’s sons.

A tarried two-step with history

For the veteran lawmaker, it is not his first brush with political implosion.

After all, Sharif was first pressured to resign from the prime ministership by the Armed Forces in 1993. Back in the driver’s seat by 1997, he was ousted again in 1999 during Pakistan’s most recent military coup.

The latter transpired during a botched attempt to replace General Pervez Musharraf as Chairman of the Joint Chiefs and Army Chief of Staff. Instead of taming the military’s most powerful man in October 1999, Sharif was outmaneuvered by the latter, forced to resign, charged with treason, and sent into self-imposed exile in Saudi Arabia for a decade. He was also banned from Pakistani politics for 21 years.

Though Musharraf retained power for the next nine years (1999-2008), Sharif was unsurprisingly quick to seek revenge once he retook office after his exile in the Gulf.

Granted, Musharraf had been deeply unpopular at the time of his self-imposed exile in 2008 (first to London, later to Dubai), particularly because of a November 2007 move to impose martial law, suspend the constitution, sack the Chief Justice, and simultaneously act as both President and Chief of Army Staff.

Also a deeply pro-American leader, Musharraf initially benefited but ultimately lost out thanks to his regime’s close alliance with Washington and the war on terror. These political positions were unpopular with the vast majority of Pakistanis, particularly since most of the war and a huge proportion of the terror occurred on Pakistani soil.

The general’s litany of sins aside, for Sharif to try the military’s second-most powerful individual since independence with treason was a step too far for the country’s most powerful institution.

Adversaries since 1999, the bulk of the barracks had been keen on Sharif’s ouster for a long time.

Catch me if you Khan

This does not, of course, make Sharif’s dismissal in July a “post-modern” coup.
Rather, it points to a confluence of factions whose interests momentarily converged: first and foremost, an independent judiciary; second, the military; and third, Sharif’s most vocal domestic opponent, former cricket star and leader of the Pakistan Tehreek-e-Insaf (PTI), or Pakistan Movement for Justice party, Imran Khan.

Founded by the nationally much-beloved cricketer in 1996, the PTI’s popularity has only increased in proportion to the endemic corruption of Pakistan’s political class, be it the reign of the People’s Party (PPP), an ostensibly socialist outfit largely run by Bhutto Zardari (2008-2013), or their successors, the rightwing Muslim League (PML-N), headed by Sharif (2013-present).

After boycotting the 2008 election, the first to be held since the military took power in 1999, the PTI contested the 2013 elections with great gusto, gaining seven million votes and gaining the third-highest share of seats in parliament.

Amidst widespread claims that the ruling Muslim League had tampered with the results, the PTI immediately staged a massive three-month ‘Azadi March’ (‘Freedom March’) from Lahore to Islamabad, followed by a parliamentary sit-in, which according to many analysts would not have grown nearly as large nor lasted nearly as long had it not had the support of various high-ranking generals.

Though Khan called off the march in the wake of the Peshawar school attack in December 2014, the genie had already been let out of the bottle.

Not long after he called for his Azadi March in August 2014, the Sufi cleric-cum-anticorruption populist Muhammad Tahir-ul-Qadri called for a similar “million man march” to be launched the same day, and follow a parallel route to the capital.

Though Khan never endorsed Qadri’s movement, the two forged an unspoken ecumenical front.
Quieter throughout 2015, Khan launched a renewed attack once the Panama Papers revealed that three of Sharif’s children either owned or were authorized to sign transactions for offshore companies that were used to purchase high-end property in Mayfair, London.

When Khan took the case to the highest court in April of this year, two of the country’s five Supreme Court judges recommended disqualifying him from office; the remaining three called for a further probe.

In the course of pursuing the latter, investigators noted the gaping difference between the Sharifs’ net wealth and stated sources of income.

Pushed about her involvement in the affair, his daughter Maryam Sharif produced what appears to be a forged document showing her transferring property deeds to her brother. Written in 2006 in Calibri font, investigators took particular interest in the fact that Calibri was not commercially available before 2007. Enter Fontgate.
Suffice to say, investigators recommended the Supreme Court pursue the case against the family first put forward by Imran Khan.

Yet even the six-person team chosen to lead the investigation was not without controversy. Of the court-mandated body, two were from military organs, including the much-feared Inter-Services Intelligence (ISI).
Which raises the perennial question of Pakistani politics: who holds the balance of power in civil-military relations? Or, to put it somewhat less coyly, to what extent has the military’s iron grip on institutional power been eroded by Sharif’s attempt at populist rightwing Islamism?

If three key factors were behind Sharif’s downfall—a tale of personal corruption revealed by the Panama Papers and exploited by Khan and the PTI; an instance of great bravery and muscle-flexing by a refreshingly independent judiciary; and a military apparatus no longer content to greenlight a regime not to its liking—the third is arguably the most important and least understood.

Long a thorn in the Joint Chiefs’ side, Sharif’s particularly uninspiring brand of Islamist populism nonetheless came the closest in decades to neutering the military’s near-final say on Pakistan’s political trajectory.

This was the second time in three years the PM had placed a man of his personal choosing in the most powerful position in the armed forces—though his previous pick, General Raheel Sharif (2013-2016), was more difficult to tame.

After another string of high-profile retirements that same year, a bio-bureaucratic luck of the draw, Sharif got to replace a number of other senior command positions with men of his ilk.

Combined with his purported ‘obsession’ with forging better ties with India—a huge detriment to the long-term prestige and profitability of the army—the writing on the wall had been visible, say the conspiracy theorists, for years. All it took was a scandal of hugely public—and international—proportions to bring down the house of cards.

Apart from the military appointees involved in the graft probe in July, no evidence has been unearthed of direct military involvement in Sharif’s most recent downfall.

But in a land of intrigue, graft, and civil-military rivalry, conspiracies often double for Occam’s razor, when they don’t replace it altogether.

Though Sharif has been disqualified from parliament for life, this does not mean he will simply go away. After all, he was given a 21-year ban from participating in political life in the wake of the 1999 coup, but was back at the helm 14 years later.

What’s more, his Pakistan Muslim League-Nawaz (PML-N) party still controls the government, and voted on Monday October 5 to reelect him as party leader, using its parliamentary majority to amend a law to be able to do so.

The difference this time around is more of a socio-structural one.

As a Cold Warrior of the most conservative ilk, Sharif hitched his wagon to the rising wave of the time: an increasingly urbanized yet still religiously conservative demographic no longer content to take political orders from feudal bigwigs or postcolonial secular shibboleths.

But as proof of graft against leaders of every stripe grows and Pakistanis expand their (Islam-friendly) ideological palate, movements such as the PTI, a self-described Third Way, centrist, ‘anti-status quo’ party advocating egalitarian Islamic democracy, are carving out their own niche.

In the age of celebrity executives, that the PTI’s leader is a world-famous cricketer does not hurt; that he has a very sizeable chunk of his co-regional Pashtuns firmly behind him, as seen in the PTI’s ascendant role in Peshawar, not to mention much of the young and educated vote across the country.

The real questions going forward are thus double: first, whether or not the Sharifs and Muslim League can retain their primacy in the Punjab and prevent from the People’s Party or PTI from capitalizing on ‘Panamagate’ in next year’s general election; and second, whether articles 62 and 63 of the constitution requiring MPs to be “honest and sincere” will be used in full against other high-profile politicians.

Whatever the case, the outcome of Friday’s indictment will set a huge precedent; whether Sharif, the PTI, or the judiciary emerges victorious will color the course of Pakistani politics for years to come.