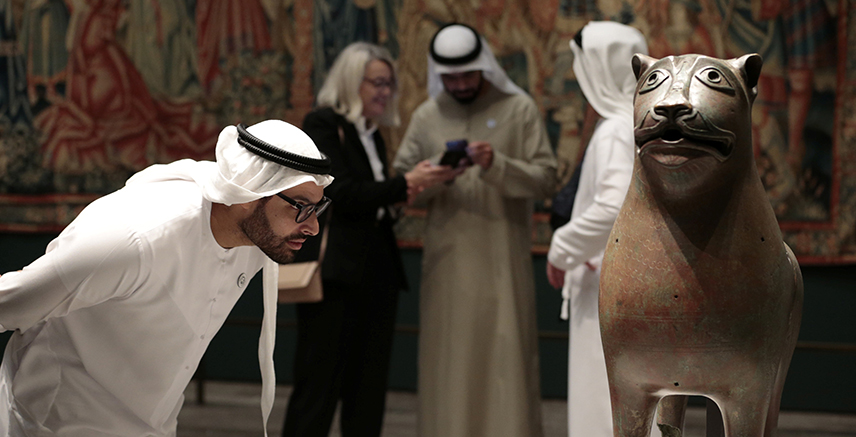 In Pursuit of Culture

4 Cultural Events in the UAE

Share on:
TBY highlights four cultural events taking place across the Emirates that are helping to sculpt the country's near future.

One sector to receive increased attention and finances is the arts and culture industry.

Here TBY highlights four cultural events taking place across the Emirates that are helping to sculpt the country’s near future.

Around 450 members of the art, media, and technology industries, as well as policymakers from across the globe, are to gather in Abu Dhabi in April this year for the Emirate’s annual Culture Summit, following the success of the inaugural event in 2017.

The theme of this year’s convention is Unexpected Collaborations: Forging New Connections Between Heritage and Innovation, Near and Far, Creativity and Purpose.

Parts of the summit will be held at the Abu Dhabi Louvre. The groundbreaking gallery opened in November of last year and catapulted the Emirate onto the global culture scene.

However, the museum is part of a wider and more comprehensive narrative of artistic appreciation in Abu Dhabi, one that spans the length and breadth of Saadiyat Island (Arabic for “Island of Happiness”).

The island, 500 meters away from mainland Abu Dhabi, in addition to multi-purpose construction complexes, is home to the Saadiyat Cultural District, due to be fully complete in 2020.

A megaproject commissioned by the Abu Dhabi Department of Culture and Tourism (DCT), Saadiyat Cultural District comprises, as well as the Louvre, the Zayed National Museum, the Guggenheim Abu Dhabi, and the Abu Dhabi Performing Arts Center.

The Saadiyat Cultural District reflects the conviction, expressed by leadership at the DTC, that diverse organizations can bring value to the Emirates: not just financial or social value, but also value associated with legacy and reputation building.

The first of its kind, the Culture Summit places emphasis on the role technology and governments can play in facilitating the growth and spread of cultural industries.
At last year’s summit participants included UNESCO, the TATE, and El Sistema.

Now in its 37th year, the Sharjah International Book Fair (SIBF) is considered one of the stalwarts of the UAE’s evolving cultural events circuit. Described by its organizers as the third largest book festival in the world, SIBF in 2017 hosted 2.3 million visitors.

Moreover, according to HE Ahmed Al Ameri, Chairman of the Sharjah Books Authority, who was interviewed by TBY in 2017, with over 1,200 books available for purchase, the festival made USD34 million in total sales.

Keen to capitalize more on this bibliogenic success, Sharjah has created the world’s first ever publishing freezone — Sharjah Publishing City (SPC). Launched in November 2017, the 40,000 square meter freezone offers space for over 550 printing, licensing and distribution companies, and also houses a data center platform containing 16 million books in various languages online, which can be printed readily.

At the time of its launch SPC received over 150 applications from clients attracted by the freezone’s benefits: namely, tax-free export and import, easy transfer of capital, and the right—even for non-citizens—to own property. Months after its inauguration, the SPC has taken to the world’s stage to make a name for itself, with representatives on tour in Kuwait, India, and the US. Ambitions are for the SPC, once complete, to have capacity to print an astonishing 1 million books every day.

Taking place this month in the Emirate of Ras Al Khaimah is the sixth annual RAK Fine Arts Festival (RAKFAF).
Off the beaten track for many art lovers, RAKFAF, which gathers local and international artists, musicians, and filmmakers, is an interdisciplinary celebration of all things cultural in Ras Al Khaimah. The brainchild of the Sheikh Saud Bin Saqr Al Qasimi Foundation, it is a festival with a distinctly communitarian ethos and mandate. Participation is open to the general public, and proceeds raised from ticket sales are reinvested in the festival, expanding the budget for the following year.

RAKFAF spearheads the Sheikh Saud Bin Saqr Al Qasimi Foundation’s broader initiatives, as part of the Community Engagement Strategies and Priorities Document (2013-18), to safeguard the economic and social stability of Ras Al Khaimah in the future by emphasizing research and talent development.

Moreover, RAKFAF serves as a modest example of how to go about exercising soft power. Held in the Emirate’s National History Museum, which celebrated its 30th anniversary last year, RAKFAF welcomes members of the international artistic community to experience the culture of RAK and simultaneously encourages RAK’s own homegrown artists to act as ambassadors globally. In its five-year history the number of participating artists has more than tripled.

Additionally, in the build-up to the festival, RAKFAF makes funds available in the form of one annual AED25,000 grant for the creation of a short documentary on any topic related to the UAE or the GCC. Applicants must have some prior credentials to ensure the quality of the production.

In conversation with TBY, RAKFAF Director, Suqrat bin Bisher, highlighted the importance of the festival for inspiring future generations: “For the past six years, the Fine Arts Festival has worked hard to bring the community together to celebrate art, create opportunities for cultural exchange, and support the creative and artistic sectors of Ras Al Khaimah.

We hope to continue to foster and broaden engagement with young people in the festival moving forward as it continues to evolve. A key part of this is an ambition to expand the educational programming associated with the festival in the future, and to tie such activities back to other Foundation initiatives and programs throughout the year.”

For an emirate that is about to cut the ribbon on its first 3D printed villa, and is putting the finishing touches to a Toyota GT86 with 3D printed parts, it is only fitting that Dubai’s latest artistic venture, the Canvas 3D Art Festival, takes us into another dimension.

Art, you might argue, has been 3D since the Italian Renaissance painters and architects gave us linear perspective—or, since the advent of sculpture, or photography, or conceptual art. However, the Canvas 3D Art Festival celebrates the latest in three-dimensional artistry, namely: anamorphic art, mural art, object art, tape art, and 3D sand art. One of the headline acts of the festival is Leon Keer, a Dutch artist whose 3D Lego Terracotta Army, chalked on the ground at a festival in Sarasota in 2017, has met with wide acclaim.

The festival was launched in 2015 by Brand Dubai, the creative arm of the Government of Dubai Media Office (GDMO) in order to “contribute to enhancing the artistic and cultural ambience of Dubai and support its development into a global cultural hub.”

But behind the aesthetic and technological pomp and ceremony is substantial financial weight. The government is partnering with Meraas Holdings, one of the Emirate’s largest holdings groups, to put on the show, inviting over 30 international artists to participate. Moreover, the highlight of the event is the announcement of the winner of the Canvas Award, inaugurated in 2016, and the world’s first to recognize achievement in 3D art. Five prizes, with award money totaling a not inconsiderable USD650,000, are distributed over the course of the event.