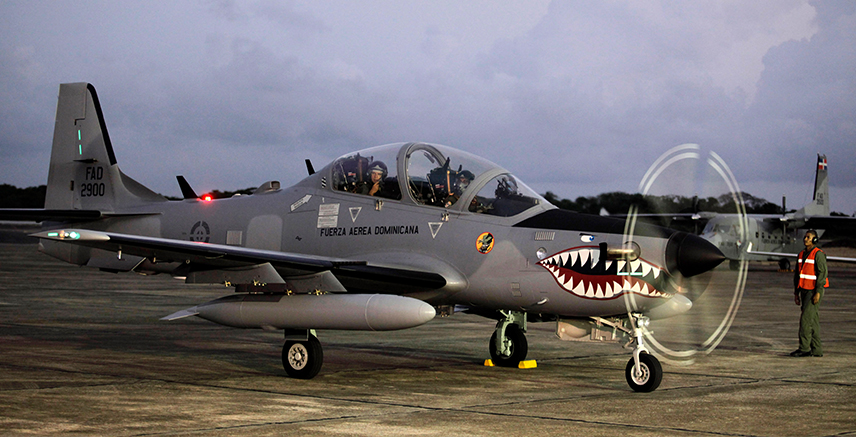 Share on:
With the most successful developing-world defense industry in history, Brazil’s lean technology, a focus on counter-insurgency, and a laissez-faire arms sales policy has positioned it as a world leader in military equipment production.

Military officers arrive in a combat plane, known as a Super Tucano, during a ceremony at a military base in Santo Domingo December 10, 2009. The Brazilian aircraft were purchased to combat drug trafficking in the Caribbean island, local media reported. REUTERS/ Eduardo Munoz

With the most successful developing-world defense industry in history, Brazil’s lean technology, a focus on counter-insurgency, and a laissez-faire arms sales policy has positioned it as a world leader in military equipment production.

Defense industries, like the US tipping culture, are the gifts that keep on giving: once established, they are extremely difficult to dismantle.

There is, of course, the Costa Rican option: to abolish one’s military and hope for the best (i.e. rely upon Uncle Sam’s stewardship of the neighborhood).

The other option is to develop a native defense industry, precisely what Brazil has been doing over the past four decades.

Beginning in the 1960s, the country has had a clear need to diversify its sources of weaponry. As the US got bogged down in Vietnam, arms sales to many of its developing world clients declined, forcing Brasilia to look to Western Europe.

Yet this wasn’t so secure either. When Jimmy Carter placed an arms embargo on the Argentine dictatorship a few years later, it prompted fears among Brazil’s own military regime (1964-1985) that they might be next.

Hence the beginning of one of the most interesting, and least understood, developments in the history of Western Hemispheric defense industries.

By 1987, Brazil’s “Safety and Security” industry was exporting USD1 billion in arms to the rest of the world, twice its entire import bill on a decade earlier. Not only had it become the world’s largest exporter of wheeled armored vehicles; it was also delivering large quantities of jet aircraft, battle tanks, missiles, and naval vessels to clients across the world.

Most notoriously, this included sales of the Avibrás ASTROS II Multiple Launch Rocket System (MLRS) to Muammar Gadhafi, the same to Saudi Arabia, later used against the Iraqis in the First Gulf War, and armored vehicles and air-to-ground missiles to Saddam Hussein’s regime.

Famous for supplying both sides in the Iran-Iraq War, Brazil’s nascent industry was often referred to as an “oil for arms” program. While this makes more sense in the context of the 1973-4 oil embargo and the huge import bills it led to, it also represents one of the industry’s strategic cornerstones: no regime was too unsavory to supply.

Who called the pigs?

Yet since all good parties must come to end, it wasn’t long before the neighbors called the police (and even worse when your neighbors are the police). When Brazil secured a contract to sell Saudi Arabia a fleet of Engesa EE-T1 Osório Main Battle Tanks, the US finally intervened, pressuring Riyadh to back out of the agreement. In combination with the end of the Iraq-Iran War, Brazil’s burgeoning industry was forced to retreat.

Yet the fundamentals of success were already in place: an apolitical (or amoral) sales policy with no third-party resale stipulations; simple but highly efficient “tropicalized” technology; and considerably lower prices than the US or Western Europe.

Though Brazil had reason to fear certain Cold War developments—first, a mild domestic Marxist urban insurgency in the 1960s and second, a series of Soviet naval peccadilloes in the South American Atlantic—rather than build for total war, the weapons it developed were far more tuned to the country’s specific geographical and political circumstances.

Made to (civil dis-) order

On the one hand, the equipment was made to withstand humidity and high temperatures in extremely rugged terrain; on the other, the machines were better geared to conduct counter-insurgency, aerial reconnaissance, and close air support—i.e. surveillance against low-scale domestic threats.

These are all embodied in Brazil’s best-selling A-29 Super Tucano, which the governments of Angola, Burkina Faso, Chile, Colombia, the Dominican Republic, Ecuador, Guatemala, Indonesia, Mauritania, Senegal, and the US have all purchased. Just last year Washington put in a USD427 million order for 20 Super Tucanos from Brazil’s Embraer to supply the nascent Afghan air force.

Yet the industry’s real best seller remains the Engesa EE—11 Urutu, a six-wheeled armored personal carrier used by more than 20 countries for peacekeeping, civil disturbance, and low-grade combat roles—just the kind of machinery needed in the streets of Bahrain, Tunis, Cairo, and Islamabad these days.

Though Brazil’s own defense budget has been hugely curtailed since the beginning of the country’s economic crisis in 2014—with spending expected to fall from 1.8% of GDP in 2012 to merely 1.2% by 2020—the broader trends are still very positive.

With intrastate warfare on the wane and civil disturbances on the rise, the Brazilian defense industry’s decades-long comparative advantages in manufacturing lean counter-insurgency kits places it well ahead of the pack to become an even bigger industry player.

One imagines its ‘apolitical’ customer sales policy won’t hurt either.