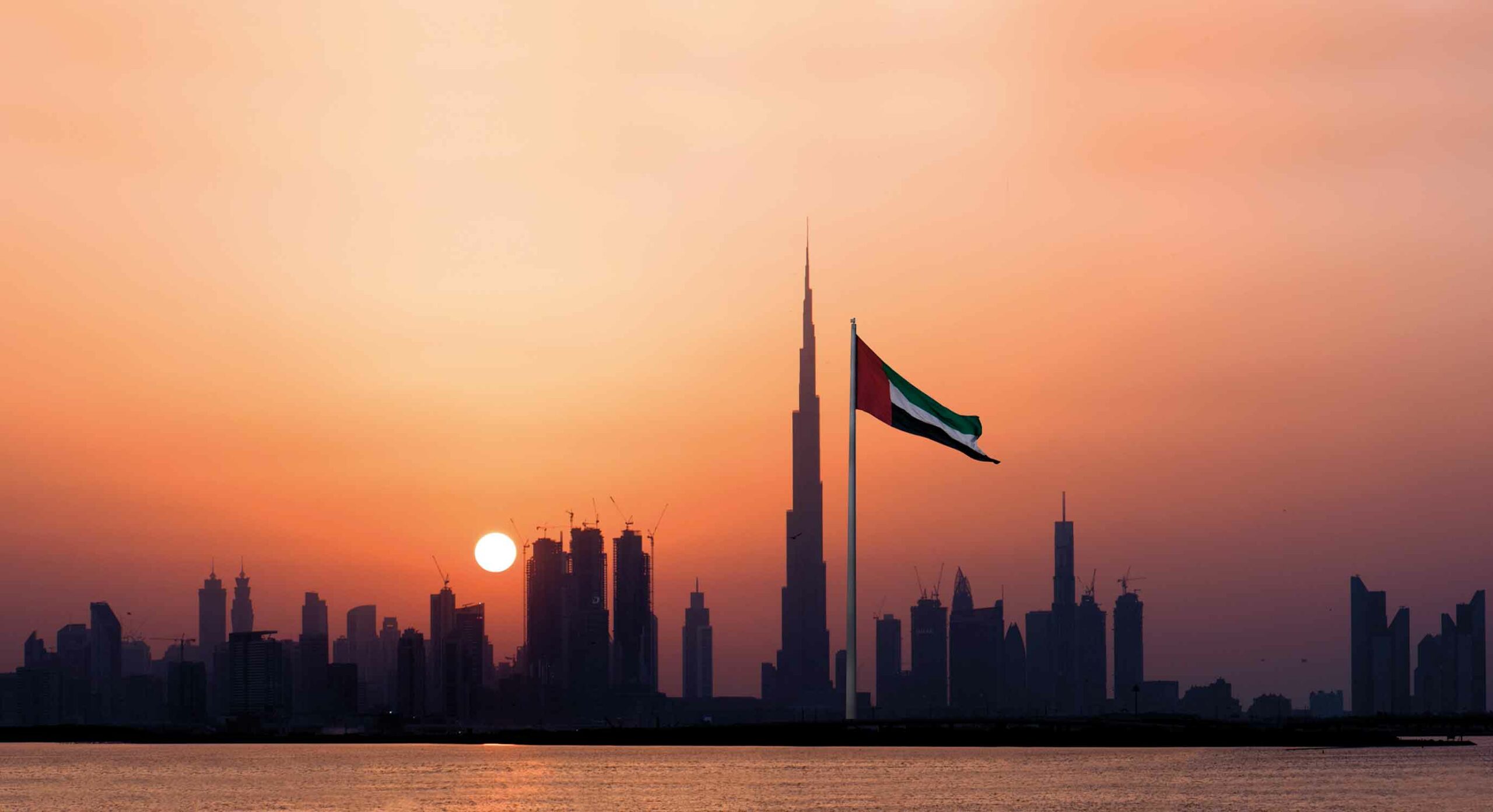 A Font of Achievement

Share on:
Dubai continues to advance in the international arena in leaps and bounds, while at home, a diversified economy remains the force behind ambitious plans to build an information-driven society. And […]

Dubai continues to advance in the international arena in leaps and bounds, while at home, a diversified economy remains the force behind ambitious plans to build an information-driven society. And meanwhile, the clock ticks toward the momentous hosting of Expo 2020, a stellar achievement befitting the objectives of Dubai’s wide-reaching industrial Visions 2021 and 2030. The Emirate’s history is one of dynamic international relations and sheer commercial agility, akin to that of the national animal, the Arabian Oryx. Small wonder then that the Emirate is seen as a diplomatic stalwart and a champion of diversity and tolerance that has ensured its unshakable stability in a region of seismic political realities.

The UAE was established as a federation of seven constitutional monarchies, or Emirates, back in 1971. In 2006, the reins of power were assumed by HH Sheikh Mohammed Bin Rashid Al Maktoum, Ruler of Dubai who also serves as Prime Minister and Vice President of the UAE. And while Dubai’s independence came in 1971, the Al Maktoum family’s rule stretches back to 1833. HH Sheikh Mohammed is also on the board of the UAE’s Supreme Council, the country’s highest executive body, and governs Dubai’s local administration, the Dubai Municipality. The Dubai Municipality, responsible for overseeing the city’s transport, housing, and development, was established in 1954 by the late Ruler of Dubai, Sheikh Rashid Bin Saeed Al Maktoum.
The latest parliamentary elections took place in October 2015, wherein 330 candidates contested the 20 elected seats of the Federal National Council (of the 40 seats in total, 20 are appointed). The National Election Committee was established in 2011 to oversee the process. Dubai and Abu Dhabi are the only two of the UAE’s seven Emirates that hold the power of veto.
In February 2016, HH Sheikh Mohammed announced a cabinet reshuffle, a rare occasion in and of itself. Today there are 29 ministers, including a new Minister for Happiness, Minister for Youth Affairs, and Minister for Climate Change and the Environment. The average age of the new ministers is 38, and notably, of the eight new ministers five are women.

At a staggering 828m in height, Dubai’s Burj Khalifa remains the world’s tallest building. And yet the meteoric rise of the young and vibrant Emirate of Dubai is best exemplified by its forthcoming hosting of Expo2020, a privilege it won back in 2013, becoming the first nation in the Middle East to do so. The event, scheduled to run from October 20, 2020 to April 10, 2021, not only brings national prestige, but moreover acts as an economic springboard as official data at the time of winning forecast an ultimate USD38.1 billion contribution to GDP from related activities. Around 277,000 new jobs are forecast to be created by the event. Meanwhile, an infrastructure commitment of USD6.8 billion is testament to long-term economic confidence. Of the estimated 25 million visitors, 70% will arrive from overseas to relish the event and the rich offerings of the Emirate itself. By that year, too, annual tourism arrivals are set to reach 20 million. These visitors, as well as residents, will benefit, perhaps unawares, from another advance emblematic of Dubai’s technological prowess. A new USD91.2 million Enterprise Command and Control Centre (EC3) is to come online in time to handle the additional arrivals for Expo 2020. Inaugurated by the UAE’s Vice President and Prime Minister and Dubai’s ruler HH Sheikh Mohammed Bin Rashid Al Maktoum, the smart traffic center is capable of overseeing the Dubai Metro, Dubai Tram, and public buses and taxis, as well as marine transit and traffic control systems, and will be the responsibility of the Roads and Transport Authority.

Expo 2020 embraces the themes of sustainability, mobility, and opportunity under the banner of “Connecting minds, creating the future.“ Its principle site will be a 438ha location mid-way between Dubai and Abu Dhabi, to the south of Dubai, and close to the Emirate’s enormously significant port of Jebel Ali.

Dubai, though, is no stranger to hosting internationally significant conferences, summits, and fairs on crucial academic themes and political and commercial opportunities. Notable among these is the World Government Summit, held every year in Dubai, the fifth edition of which is in February 2017. The organization is a fertile publisher of research on key topics of significance for tomorrow’s world, such as sustainability and the digital environment. This year’s outing will see over 90 prominent speakers, who apart from HH Sheikh Mohammed Bin Rashid Al Maktoum, Vice President and Prime Minister of the UAE and Ruler Of Dubai, include the IMF’s Christine Lagarde and high-tech visionary Elon Musk. These distinguished individuals will address more than 4,000 attendees from around 140 participating nations.

The most populous city in the UAE, Dubai is also the most culturally significant. Indeed, its multiculturalism is evident in its wide spectrum of resident nationalities, not to mention the array of foreign visitors. It is not surprising that in 2002 Dubai became the first Emirate to permit foreign ownership of property. And being one of the leading regional financial hubs underpins the Emirate’s durability and economic growth. The UAE is also a central character in regional and international affairs. It is a founding member of the Gulf Cooperation Council (GCC) and the Arab League, and a member of OPEC, the Organization of Arab Petroleum Exporting Countries (OAPEC), the Organization for Islamic Cooperation (OIC), and the UN.

As with other regional nations, food security is a notable concern for the UAE, and imports from Latin American nations confirm solid bilateral relations. To boost commercial traffic, the elimination of double-taxation has been explored with a number of nations. As Paraguay’s Minister of Industry and Commerce Gustavo Leite told TBY, “It would stimulate investment and in turn trade.” Meanwhile, in terms of extending the commercial footprint by leveraging both nations’ hub status to access new markets, the Vice President of Uruguay Raúl Fernando Sendic Rodriguez notes that there are, “…many similarities between both countries; for example, we have a similar geographic size and location in relation to our respective regions and we both complement the wider economies around us.” Costa Rica’s Minister of Foreign Affairs and Worship, Manuel Antonio González Sanz intends for his nation, “…to be the UAE’s main partner in Central America and the Caribbean.” A veteran in terms of renewable energy, Costa Rica is, “…an eco-friendly country producing 99% of its electricity from renewable sources (…) a valuable experience that we can share with other countries.” In exchange Costa Rica seeks to become a knowledge-driven economy, and to benefit from Dubai’s advanced moves toward achieving the same goal.

Ever the vanguard of innovation, Dubai has become the first city to have a font named after it. The “Dubai Font,“ launched under the “Express You“ slogan, is available in 23 languages, and thus symbolic of the Emirate’s international spirit and digital ambitions.

The UAE overall is one of the world’s greatest donors of humanitarian aid through programs that benefit recipients in around 140 nations worldwide. The foreign aid budget accounts for 1.33% of the country’s total gross national income. The leading recipients of UAE aid between 1971 and 2015 were Egypt (total to 2015 AED47.26 million), Syria (AED12.35 billion), Morocco (AED12.25 billion), Jordan (AED11.48 billion), and Palestine (AED7.68 billion). The International Humanitarian City (IHC) was established in 2003 by HH Sheikh Mohammed Bin Rashid Al Maktoum to support infrastructure projects, relieve poverty, and assist refugees and victims of natural and humanitarian disasters. Meanwhile, the annual Dubai International Humanitarian Aid and Development (DIHAD) Conference and Exhibition is now in its 15th year. Back in 2015, the UAE sent a mission to Nepal to lead relief efforts in Kathmandu following that April’s calamitous earthquake. And over the previous decade, similar assistance has been extended to Indonesia, Afghanistan, and Pakistan, whereby the nation is recognized for its expertise in post-earthquake recovery operations. Also in Pakistan, in a bid to eradicate the lingering blight of polio, the UAE vaccinated 86 million children there in 2015-16. That nation had also received a total aid program of USD318 billion in the wake of widespread flooding in 2010. Notably, too, in 2014 the UAE pledged USD200 million in grants to assist the redevelopment of Gaza. And since 2011 Dubai has been particularly concerned with persistent instability in Syria and Yemen, having been a key player in relief efforts in the latter nation. In 2016, the UAE led the relief effort in the southern Yemeni port city of Mukalla, where it drove out Al Qaeda insurgents and then assisted in the reconstruction of homes and infrastructure. And in response to a UN appeal for USD2.1 billion to deliver urgent food and relief materials, the nation established an aerial and marine relief bridge where planes and ships made timely aid deliveries. Humanitarian assistance included food aid of 172,000 tons and over 111 tons of medical supplies, as well as ambulances; this in addition to the daily delivery of 235.8 tons of food. In fact, overall assistance extended to Yemen between April 2015 and March 2017 reached USD2 billion. Yet assistance has stretched far beyond immediate aid to encompass permanent relief. Infrastructure development has included construction and renovation of key facilities ranging from energy and communications networks to dams hospitals and schools. Conflict had crippled Yemen’s transport infrastructure, placing a further burden on reconstruction efforts. In response, the UAE gave USD146 million worth of civil transport, as well as water and fuel transport vehicles in Aden, Marib, Hadramaut, Al-Mahra, and Socotra Island. It also reconstructed Aden airport and Socotra Island port. And meanwhile, in a bid to get the wheels of the Yemeni state turning, funds of USD716 million, 36% of the UAE’s total assistance, covered key budget items including the salary payment of civil servants.
On December 2, 2017 Dubai will celebrate its National Day, a joyous occasion of pomp and spectacle that will serve to crown another year of achievement for the hugely ambitious Emirate.