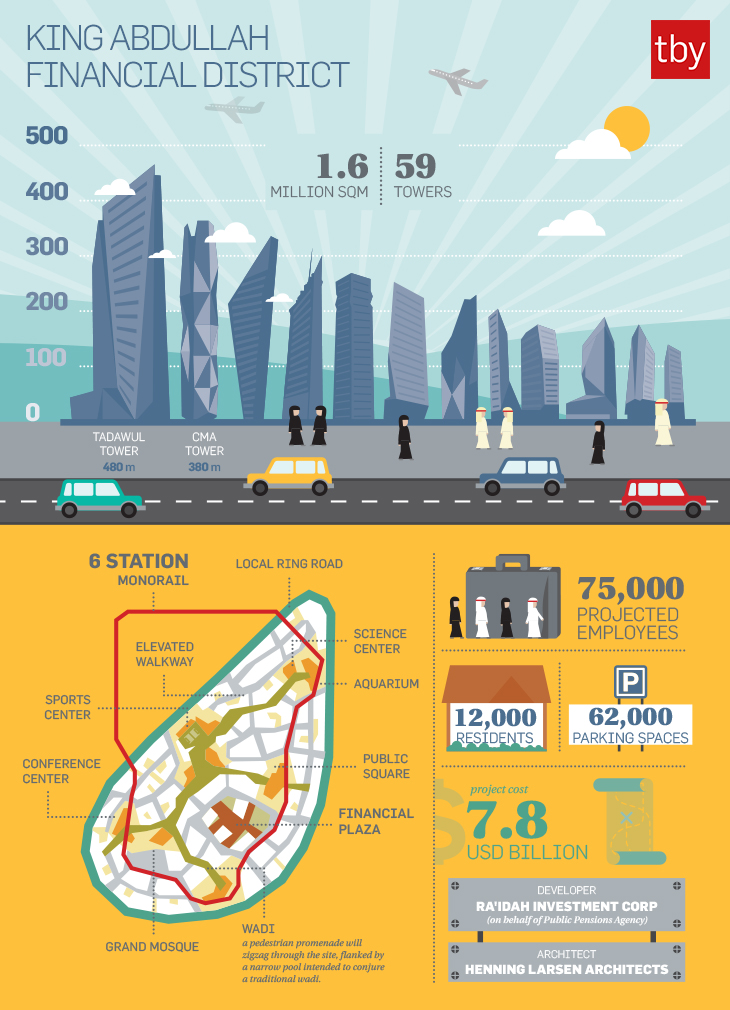 Share on:
At nearly $8 billion, the King Abdullah Financial District is one of the most ambitious projects in the region. The KAFD is the centerpiece in the government's plan to transform Riyadh into a major regional and eventually global financial center, but the project itself has faced delays and criticism over its lavish excessiveness.

More than just a real estate development, the massive King Abdullah Financial District (KAFD) project is the cornerstone of the Saudi Arabian government’s initiative to transform the country into the de facto financial hub of the region. The roughly $8 billion KAFD is being developed in the Asahafa region of Riyadh, designed to be insulated from the rest of the city to foster the ambitious development goals of the Kingdom’s financial sector.

KAFD is being developed by the Ra’idah Investment Corporation on behalf of the Kingdom’s Pension Authority. The master plan of the project, which includes 59 towers in a total area of 1.6 million sqm, was designed by Denmark-based Henning Larsen Architects. The design guidelines for KAFD were notable among other reasons for not separating the sexes in the district.

The financial district also includes a monorail system, supplied by Bombardier. The first Innovia 300 monorail, with KAFD being its launch customer, was unveiled in late 2014, coming from Bombardier’s monorail center in Kingston, Canada. In total, six monorail stations on a 3.6km circuit will serve the district.

However, the project is not without criticism. Some observers have noted that the grandeur of the district does not make it feasible for the realities of the real estate market in Riyadh, noting that the master plan of KAFD includes up to three times of capital’s current high-end office space.

However, government figures would argue that the project is much more than just a real estate investment. Regarding the higher purpose of KAFD, Dr. Ibrahim bin Abdulaziz Al-Assaf, Minister of Finance said, “our joint goal of establishing King Abdullah Financial District is to provide attractive work environments for the ever-growing number of the Saudis working in the financial sector.”

Dr. Abdulrahman Al Tuwaijri, Chairman of the Capital Market Authority, added that the CMA was “seriously working on developing and supporting [the] capital market,” expecting that the KAFD will “work on raising the financial sector’s contribution to the development of the national economy with all its available capabilities presenting [Saudi Arabia’s] education-seeking youth with diversified opportunities to hone their skills and develop all their capacities, in order to participate in developing and expanding the capital market base.”

Further elaborating on the importance of KAFD, Mohammed Bin Abdullah al-Kharashi, Governor of the Public Pension Agency, noted that the project “creates an opportunity for the Capital Market Authority and other governmental bodies such as the Saudi Arabian monetary Agency, as well as concerned companies in insurance, banking and financial services to get appropriate locations at the latest global levels. The Agency expects that this project is to create high quality and efficient work environments to attract good investment opportunities to the Kingdom.

Once fully completed and opened, KAFD is expected to act as the headquarters for the Capital Market Agency, the Central Bank, as well as other banks and international investment companies. The gradual opening of the district over 2015 and 2016 also coincides with other major government initiatives to transform Saudi Arabia’s finance sector. Perhaps most importantly, restrictions on the Saudi Stock Exchange (Tadawul) for qualified foreign investors will be dramatically eased in 2015 (this is supposed to be around June, so we must check this at the time of printing to see if it actually happened or not). Regionally, KAFD must compete with other similar financial district mega-projects in Dubai and Istanbul. However, with global investors lustily eyeing the Gulf Cooperation Council’s largest capital market on the eve of its international debut, the King Abdullah Financial District may have just what it takes to take Saudi Arabia’s finance sector to the next level.