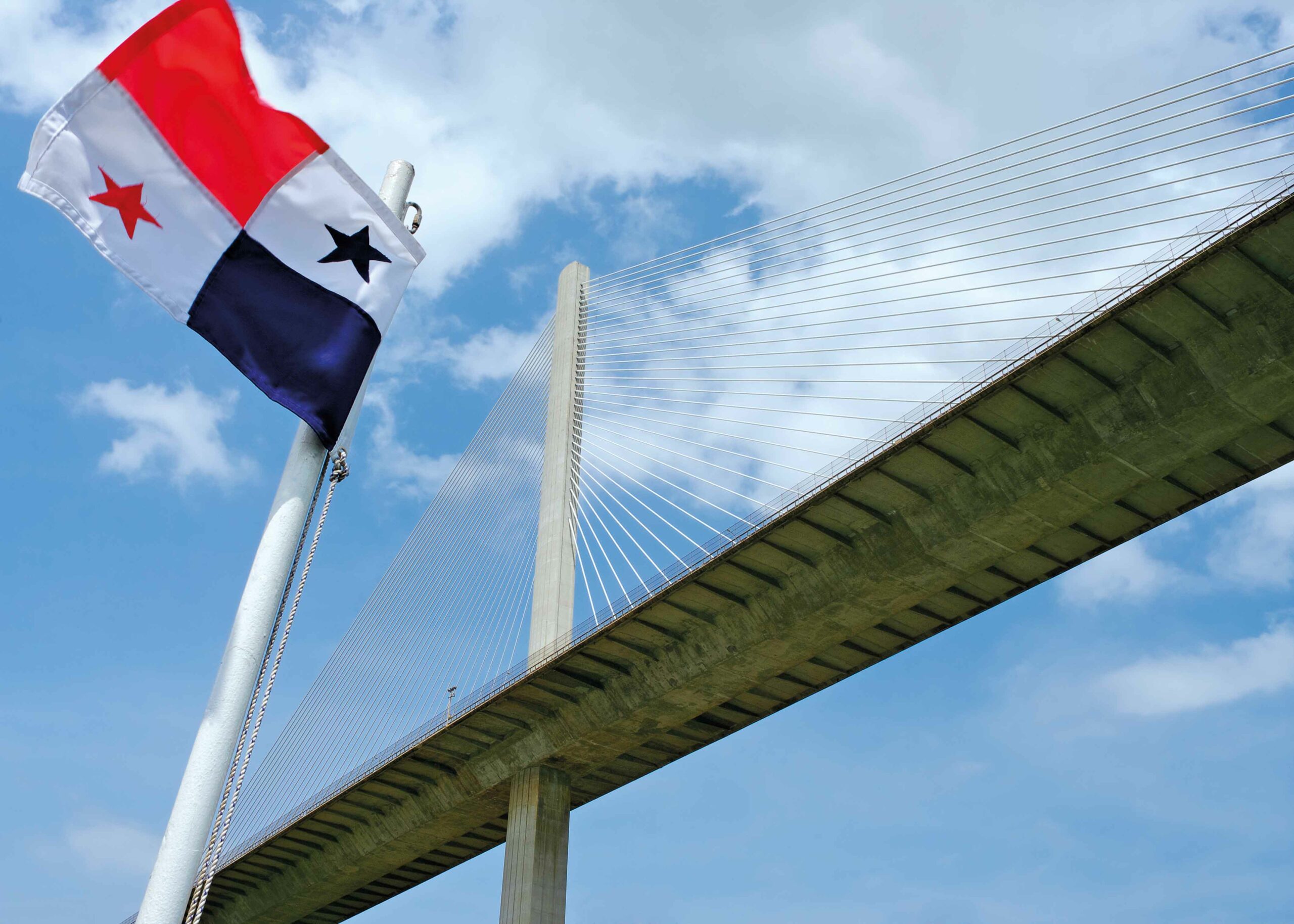 A Huge Foot in Both Worlds

Share on:
Although Panama's place in the sun is all but guaranteed by the extension of the canal, the isthmus nation will still have to toe a fine line in assuaging the world over the transparency of its financial dealings.Happily, it seems to be making significant progress.

Panama’s place in world affairs is a disproportionately central one. For a country of less than 4 million people, roughly the equivalent of metropolitan Seattle, events emanating from Panama have had the ability to rattle governments everywhere from Russia, the UK, Iceland, Malta, Greece, Spain, Ukraine, China, and Azerbaijan, among many others. Though the notorious Panama Papers first broke in 2015, a case was still being heard by the Supreme Court of Pakistan in May 2017 to determine whether Prime Minister Nawaz Sharif should be stripped of his powers over two of his children’s ties to the Panamanian law firm and financial services provider, Mossack Fonseca, the chief architect of the offshore tax evasion services that have become synonymous with the country.

While the papers have certainly dented the country’s reputation and struck a powerful chord of protest against the role the Central American nation plays in the global offshoring of financial assets, the scandal also reveals the extent to which the country is so firmly embedded in the global economy—for good, bad, right, or wrong—that the ebb and flow of its very existence seems to happen in sync with the global movement of capital, goods, and people. As the Vice President of Panama Isabel Saint Malo put it, “Panama has been globalized before globalization was in fashion.”

Now that it looks as though the trend is pulling in the other direction, in rhetoric if not yet in action, Panama’s position becomes somewhat more precarious—at least on the surface of things. A world turning away from international trade, financial secrecy, and the export-expropriation of surplus wealth to offshore accounts, Panama stands to lose from a world turning in upon itself, especially given its huge investment in expanding the Panama Canal, the new and improved girth of which is fully 50% bigger and opened to great fanfare and equally great expectations in June 2016.

That being said, as long as errant assets need a place to rest their tired eyes and governments fail to muster the political capital to combat them, offshore havens will have a home in the world. The trick, as ever, will be to toe the line between mollifying the malefactors and their pursuant governments and international organizations with equal initiative. In the wake of the papers, how does Panama hope to achieve this? For one, notes Vice President Malo, since the leaking of the papers (which somewhat unjustly associate the nature of the leak with Panama when fully 80% of the offshoring firms outed in the leaked documents were registered elsewhere, among them the US and British Virgin Islands) the country has aggressively moved to clean up its legal act.

For starters, the country has made massive strides to get on board with major financial regulators. Five years ago, Panama had not signed a single double taxation agreement; today it has 25. What’s more, as recently as 2014 Panama was on the Financial Action Task Force on Money Laundering’s (FAFT) gray list for failing to comply with international anti-money laundering standards.

Founded at the 1989 G7 summit in Paris, this intergovernmental organization headquartered at the OECD now has 37 members and is tasked not only with tracing and combating money laundering, but in the wake of 9/11, terror financing. As such, when Panama introduced anti-money laundering legislation and legislation to prevent terror-related funds from passing through the Panamanian financial system, it was finally removed from the FATF’s gray list in February 2016. As part and parcel of these efforts, the country has also advanced to phase two of the OECD’s peer review.

The hand that giveth…

Having moved to shore up relations with the OECD and FAFT, the biggest question is how Panama can reassure its powerful northern neighbor that it is committed to greater transparency and fiduciary reform. After all, one of the earliest surprises in the Panama Papers story was how few Americans were implicated in the mass leak: this either meant that they were built of stronger moral fiber, or they had other means of sheltering their assets. What is striking, in any case, is that the papers emerged several years after the massive US Panama Trade Promotion Agreement (TPA), a widely debated and controversial free trade agreement that went into effect in 2012 and “provides [the] elimination of tariffs and removes barriers to US services, including financial services,” in the words of the office of the US trade representative.
If Panama had carried out the necessary reforms to assuage the US State Department’s concerns in the run up to the ratification of TPA, how did this diluvial leak manage to take down practically every BRIC and shake much of the world’s financial mortar without a peep from Uncle Sam? For starters, the nature of the financial architecture at work is far bigger than a single bilateral relationship. As Global Financial Integrity recently reported, some USD7.8 trillion was siphoned out of developing and middle-income countries between 2004 and 2013 alone, much of which finds its way to the Caribbean in one form or another to first be laundered. A rational calculation leaves but two options: get in on the action or take a naked swipe at the diamond piñata with the regulatory slugger.

Though far from the days of Operation Just Cause (to oust the drug-running CIA asset Manuel Noriega, now deceased), the US’ role in shoring up or shaking down Panamanian factions remains a powerful one. After leaving office in 2014, former Panamanian president Ricardo Martinelli allegedly took up residence in Miami, where he is still thought to reside. Now wanted by the Panamanian Supreme Court on 10 separate criminal accounts, one of which includes using state funds to spy on more than 150 political opponents, Panama’s Foreign Ministry recently filed an extradition request with the US State Department to have him returned to stand trial. The US, while acknowledging its extradition treaty with Panama dating to the 1900s, has yet to reveal whether or not it will grant the request.

A fine balance with Beijing

Whatever the fallout from these two corruption scandals, both of which have taken their internal and external tolls, Panama still saunters forward in world affairs, albeit with a few hickups. For one, Panama had managed to balance a particularly tricky act between maintaining its historical ties with Taiwan without antagonizing China. Angered by Taiwanese President Tsai Ing-wen’s call with the American president, the Chinese have been pressing Taiwan’s (mostly Latin American) allies to sever ties to the semi-breakaway island, which has long enjoyed diplomatic recognition in the area since the end of the Chinese civil war. This is a tactic China has not pursued without success: since the early 1990s, fully one-third of Taiwan’s allies have broken off ties with Chiang Kai-Shek’s political descendants, reducing its sovereign allies to 21. That became 20 in June, when Panama adopted the “One China” policy, severing ties with Taiwan.

Before June, Panama had remained firm in its neutrality. After all, after the opening of the USD5.4 billion canal expansion last July, the first ship to pass through it was a Chinese freighter, brimming with roughly 9,500 metal cargo containers, the vessel Cosco Shipping Panama. A decade in the making, the expansion allows for ships bearing up to 13,000 cargo containers to pass through the 80km canal, a huge increase on the 5,500-capacity vessels that have been the largest to make their way through the canal since its original 1914 iteration. A remarkable feat of engineering, the expanded canal is in many ways a new wonder of the modern world: using enough steel to erect 29 Eiffel Towers, the new locks are 22m wider (55m compared to 33m) and 6m deeper (18m compared to 12m).

Though the expansion will undoubtedly enhance China’s trade with the Atlantic world, it comes at a small price to the former’s prestige. After all, it was an independent Chinese billionaire, Wang Jing, reputed by some to have the tacit backing of the Chinese state, who was going to build an even bigger and better canal across Nicaragua at far greater expense. Though that project has now floundered, saving huge tracts of rainforest and fragile ecosystems in the process, Beijing’s stake in the region has scarcely faltered. For starters, and somewhat ironically, part of the boost in demand for larger cargo capacity comes from US crude from the Gulf Coast now making its way in greater volumes to China and Japan to feed Chinese growth and increased Japanese demand after the Fukushima incident.

With the US-China already the largest bilateral trade relationship in the world and only growing, the Boston Consulting Group now predicts that fully 10% of all East Asian container traffic bound for the East Coast of the US may soon pass through the extended canal, rather than unload on the Pacific coast and be schlepped across the continent by truck or train. Though seemingly marginal, this figure represents a huge chunk of global commerce, and will make Panama the literal linchpin for the world’s most important commercial and geopolitical relationship—not to mention the increased importance of the Central American nation to US-Japanese, US-Vietnamese, and US-ASEAN trade more generally. And the excitement is mutual: the Port Authority of New York and New Jersey has already announced a new USD1.3 billion project to raise the 85-year old Bayonne Bridge to accommodate the vessels, while the city of Charleston, South Carolina has begun plans to deepen its harbor from 13.7m to 16m by the decade’s end in order to accommodate vessels from East Asia.

Back at home, worldwide interest in the canal’s expansion seems likely to offset the fallout from the papers: already with the highest rate of growth in Latin America in the 21st century, the IMF expects Panama to grow by 6% in 2017. According to the deputy vice minister of the economy, Iván Zarak, FDI in Panama has tripled since 2009, and perhaps most crucially, no single sector of the economy accounts for more than one-fifth of total output. The country continues to pursue more traditional staples of 21st century diplomacy, robustly supporting international dialog and development agendas every chance it gets. In 2015 it hosted the 7th Summit of the Americas, the first of its kind to host Cuba—and during which Raul Castro famously met with Barack Obama—in addition to the country’s recent election to the UN Commission of Human Rights. A Panamanian also finally sits on the Inter-American Commission of Human Rights for the first time in the country’s history. Clearly, the long-term trends are good for Panama: close ties to America and China are all but certain, and provided East and West are still keen on each other’s products and greenbacks, the isthmus-nation’s place in the sun seems secure. Less clear is how reliant it needs to remain on opaque and morally dubious financial dealings when everything else seems to be going its way.