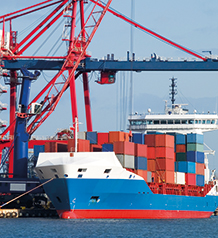 A Look to Seaward

Share on:
In less than half a century, Dubai has transformed its coastal maritime industry into a force to be reckoned with. Through the development of more facilities and the creation of a more robust regulatory environment, Dubai is looking to cement its place as a center of the global maritime industry.

If there is any sector that can claim to be at the core of Dubai’s success, the maritime trade sector is it. The original decision taken back in 1955 to dredge Dubai Creek and transform it into a regional shipping destination has seen the Emirate become a center of global trade and investment. While the creek, bordered by the suburbs of Bur Dubai and Deira, is no longer the focus of regional shipping, and with even its replacement, Mina Rashid, transforming its operations to more leisurely cruise ship pursuits, Dubai’s dominance of maritime trade in the Gulf region has been assured on the back of the massive port of Jebel Ali.

In 2015, some 22,524 vessels called in at ports in Dubai, according to the Dubai Statistics Center (DSA). Of these, the second largest group was container ships, some 6,090 dropping anchor over 2015. However, it is in the intriguing “other” category, worth some 14,714 vessels, that the secret to Dubai’s success as a maritime center becomes clearer. These vessels mostly represent the smaller break bulk cargo ships and even the traditional dhows that ply their trade across the Gulf region, and as far away as South Asia and East Africa, that form the core of the Emirate’s valuable re-exporting and free zone activities. And while the facilities only get bigger, so do the companies and regulators that have helped to create this regional giant and make Dubai’s name known as a global player in the maritime operations sector.

Initially set up as an overflow facility for the port of Mina Rashid in the 1970s, Jebel Ali has gone on to become the world’s largest manmade harbor, while its operator, DP World, has also become a global leader in the port management business. DP World now boasts a portfolio of 77 terminals on six continents, and is developing a further eight terminals as of mid-2016. In terms of container shipping, DP World estimates it has a 9% global market share through its broad portfolio of terminals, making it a top five player in a competitive industry.
Despite its increasing global success, Jebel Ali remains the jewel in the crown for the company. And in late 2014, DP World upped its stake in the future of Jebel Ali through its $2.6 billion purchase of Economic Zones World (EZW), the operator of the Jebel Ali Free Zone (Jafza). While the ultimate majority shareholder of both EZW and DP World was the eponymous Dubai World holding company, the transaction marked a return to the pre-listing days for DP World. As part of the public listing requirements for DP World back in 2007, Jafza was split off from DP World, which then went on to go public in 2011. As part of the 2015 acquisition process of EZW, DP World also decided to delist its shares on the London Stock Exchange, though has maintained its window for shareholders via the Nasdaq Dubai.

While DP World is concentrating on its large-scale activities, a new operator has been created by the Dubai Ports, Customs, and Free Zone Corporation (PCFZ) to become a niche player in smaller, emerging markets. With a name harking back some 200 years, P&O Ports was established at the start of 2015, and has already targeted port facilities in Madagascar, Somaliland, and Albania. The Chairman of DP World, HE Sultan Ahmed bin Sulayem, also acted in the same role for P&O Ports at its inception, demonstrating the importance being given to the activities of the new company. The current CEO of P&O Ports, Arif Obaid Al Dehail, told TBY that the company was also looking into opportunities in Equatorial Guinea and Mauritania. As CEO Al Dehail saw it, P&O Ports will focus “on smaller, multipurpose ports… that most need outside assistance and international best practice in ports management.”

Once the mainstay of Dubai’s maritime trade activities up until the 1970s, Mina Rashid is increasingly being transformed into serving as a cruise ship destination. The cruise side of the port is spread over some 2 million sqm, and can handle some 25,000 passengers at a time through its terminals. In 2015, a third cruise terminal came into service, capable of handling 14,000 passengers simultaneously, and significantly upping the capacity of Mina Rashid’s facilities. At present, Mina Rashid can handle seven mega-cruise liners at the same time, one of the few ports capable of this hefty task in the world. The port has retained part of its working nature, though the coastal trade berths, general cargo, and RoRo facilities for car imports/re-exports will eventually be moved over to Jebel Ali. As well, on the northern edge of Dubai, the traditional port of Al Hamriya continues to ply its trade. Also a part of the DP World stable, Al Hamriya specializes in smaller vessels, similar to Mina Rashid’s profile, though also has facilities for livestock imports as well as the largest quarantine facilities for this trade in the region.

While Dubai has been adept at creating world-beating port operators, as well as attracting a host of maritime support facilities and service providers, it has also looked to create a forward-looking regulatory authority that will look after the sector’s many interests. The Dubai Maritime City Authority (DMCA) was set up in 2007 to actively encourage the right environment for participants in the maritime sector to flourish. The DMCA looks to put together players from both the private and public sectors in order to set regulations and create policies that will best address the needs of the maritime sector. Through the Dubai Maritime Sector Strategy (DMSS), the major goals of the Dubai Maritime Vision 2030, as laid down in 2014, are sought to be implemented. Some of the elements include making Dubai a global Islamic maritime center of excellence, encouraging the creation of a maritime training and education hub, consolidating Dubai’s position as a globally competitive center through advanced processes, regulations, and technology adoption, and ensuring Dubai’s future as a global center of the maritime industry. As the Executive Director of the DMCA, Amer Ali, related to TBY on the DMSS, “The strategy is helping develop legislative infrastructure, maritime services and building a business and investment friendly environment as well.”

The DMCA has been active in promoting Dubai’s maritime sector around the world at numerous forums, but also hosts its own homegrown event—the Dubai Maritime Agenda—held for the first time in 2015. The event sought to bring together regional and international leaders to better identify the priorities that public and private players in the maritime sector need to pursue going forward. As well, the DMCA has been active in promoting a safer maritime culture, staging safety drills and training sessions. A core event for the DMCA will be the Third Dubai Maritime Week, to be held from October 30 to November 3, 2016. Dubai Maritime Week, staged on a biannual basis, is looking to bring together 350 exhibitors and some 7,000 industry professionals in the same place to discuss maritime sector trends and future growth opportunities going forward. As well, the first edition of the Dubai Maritime Innovation Award will be staged during Dubai Maritime Week to further encourage excellence in the sector.

Also on the regulatory front, in April 2016 the UAE Vice President, Prime Minister and Ruler of Dubai, HH Sheikh Mohammed bin Rashid Al Maktoum issued Decree No. 14, establishing the Emirates Maritime Arbitration Centre (EMAC), the first of its kind in the region. EMAC will seek to create the mediation and arbitration tools to be able to resolve maritime disputes in an internationally recognized manner, and join other arbitration centers based in Hong Kong, London, New York, and Singapore, thus filling a time zone/geographic gap for arbitration processes. Dispute resolution processes performed via EMAC will be held under the relevant rules related to the Dubai International Finance Center (DIFC), which has a separate legal system based on English Common Law. The rules that EMAC will operate under are likely to be released over 2016, though are likely to strongly resemble those of other global arbitration centers to ensure worldwide compliance.