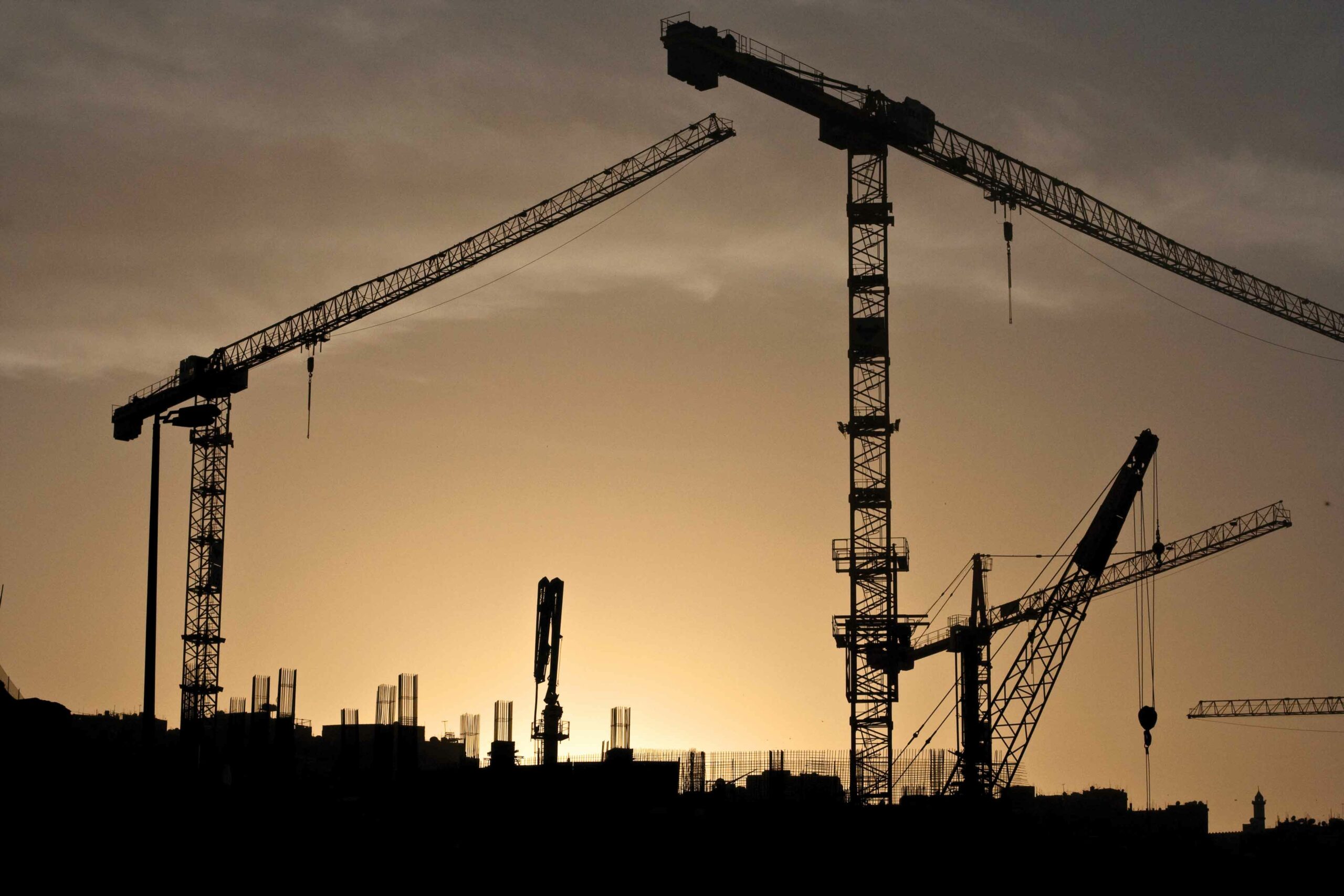 All in the Right Place

Share on:
With some $708 billion in construction projects being offered in the coming three years, the construction industry is positioning itself to handle the load.

While the effects of a 2012-13 crackdown on illegal foreign labor are still being felt, as in a number of manpower-intensive sectors in the Kingdom, construction is returning strong, with the sector aiming to return to double-digit growth by end-2015. The cement industry is hoping for changes in government policies that ban exports and set local sale price caps, though the high demand for cement and clinker coming off the back of government investment projects makes such policy changes tricky to achieve in the short term. Still, with publicly listed cement players reporting $1.56 billion in profits over 2014, up 6% in YoY terms, such restrictions are not placing a significant dent in the industry’s success story.

The construction sector grew by 6.7% in 2014 according to the Central Department of Statistics and Information (CDSI), a slight retreat from the 7.77% recorded for 2013 as a whole. Although up on the 4.77% seen in 2012, the days of double-digit rates seen pre-2011 appear to be on the return, as issues concerning access to foreign labor for major construction companies are slowly ironed out. As a proportion of national GDP, however, construction came in at 4.9% of the total by end-2014, marginally up on the 4.6% recorded prior to 2012, and demonstrating a certain level of maturity within the sector.

Some of the megaprojects helping to drive the sector include the $27 billion King Abdullah Economic City (KAEC), the $7 billion Knowledge Economic City in Medina, the long-planned $27 billion Jazan Economic City in the south of the country, and the Sudair Economic City, as well as the ambitious project to construct 500,000 new houses across the country. The redevelopment of Mecca, the creation of massive rail and road infrastructure projects, as well as the upgrading of King Abdulaziz International Airport in Jeddah are all indicators that the Kingdom is looking to use the construction sector as an economic diversification generator. In rail infrastructure alone, the Kingdom is looking to invest $7 billion in the Saudi Landbridge, which will connect the Red Sea provinces with those on the Gulf coast. Though the depressed outlook for oil prices may potentially have a dampening effect on investment, a combined total of $300 billion in construction investments is anticipated by 2016. And in terms of the local sourcing of materials, Al-Eqtesadiah daily estimated in February 2015 that some 60% of all materials needed for projects can be sourced or manufactured locally, providing a boost to the diversification of the local economy. The only areas that Saudi manufacturers were still behind in were electronics and sanitary ware, though sectors such as wooden framework and the like were naturally heavily dependent on imported raw materials owing to the lack of commercially exploited resources in the Kingdom

Reflecting the size of Saudi Arabia’s construction ambitions is the size of its construction companies, with some being world-class players. At the top of any list of the Kingdom’s constructors is the Saudi Binladin Group (SBG), established in 1931 by Mohammad Binladin and entrusted since that time with some of Saudi Arabia’s most spectacular projects. Some of its ongoing works include the $21 billion expansion of Mecca’s Grand Mosque, the $7.2 billion expansion of King Adbulaziz Airport in Jeddah, the KAEC north of Jeddah, the 1.1-km tall Kingdom Tower, and the King Abdullah Financial District in Riyadh. As well, anybody visiting Riyadh will be well acquainted with the Al Faisaliyah Tower, one of the two main skyscrapers that dominate the capital’s cityscape, and this too was another SBG project. While SBG has conducted international operations in the past, the certainty of business within the Kingdom has seen it double down on local work over the past decade.

One company that has been more active overseas is Saudi Oger, founded in 1978 and associated with the late Prime Minister Rafik Hariri of Lebanon. The company is working on megaprojects including the King Abdulaziz Center for World Cultures in Dhahran, and is involved as a joint-venture partner in the $1.4 billion Prince Mohammad Bin Abdulaziz Airport. When completed, the facility will be the first privately owned airport in Saudi Arabia, which it is building in cooperation with local Al Rajhi Holding Group through its subsidiary Al Arrab Contracting Company and TAV of Turkey. Al Arrab is a major player on the local construction scene by itself, being also heavily involved in the first phase of the 450-km Haramain High-Speed Rail Project, as well as the new passenger terminal at King Khaled International Airport in Riyadh.

Over 2014, Saudi Arabia’s cement sector managed to increase its capacity from 55 million tons to 62 million tons, though any future capacity growth will very much depend on how producers can meet their energy needs and remain competitive in the local market, with some estimates suggesting 66 million tons in capacity by end-2016. In terms of demand, Saudi Arabia was expected to require some 59.5 million tons to meet its 2015 requirements, according to the cement committee at the Council of Saudi Chambers. Over the past five years, Saudi Arabia’s cement capacity has increased by 32.2%, with over 98% of production devoted to the domestic market. Cement production reached 57.22 million tons in 2014, up 2.75% on the 55.69 million tons produced in 2013, while in terms of clinker 57.59 million tons were produced for 2014, up 5.85% on the end-2013 result. While the Saudi Arabian market is by and large self sufficient, some clinker imports are allowed into the country in the more remote regions that the main local players cannot reach. However, such imports are on the decline as local clinker stockpiles begin to build up. In 2014, clinker imports fell by 49% to just 2.51 million tons, and in terms of cement and clinker demand, local producers covered over 99% of the domestic market’s needs. Of the 15 companies that make up the bulk of Saudi Arabia’s cement industry, 14 are publically listed. The top five by market share of total sales in 2014 were Saudi Cement Company (13.94%), Southern Region Cement (13.61%), Yanbu Cement (11%), Arabia Cement (9.95%), and Al Yamama Cement (9.52%).

One of the complicating factors in expanding production for the cement sector is that producers are by and large dependent on Saudi Aramco to supply their energy needs. With other industries, such as petrochemicals, placing claims on feedstock closer to the source, cement producers have had to get inventive and improve efficiency to boost production, while keeping their cost base low enough to compete with their rivals. However, there are significant cost advantages to the current relationship. Kuwait Finance House estimated that in mid-2014 the average cost per ton of producing cement in Saudi Arabia was some $30, in contrast to the $44 per ton it calculated for the rest of the GCC region.

With cement exports still restricted, local producers, especially those close to the borders of Saudi Arabia’s neighbors, are beginning to lobby more strenuously for a greater measure of leeway. While exports to neighbors such as Bahrain are currently allowed, producers looking to cash in on the booming Egyptian and Qatari markets are not yet able to get around the June 2008 ban. Though the export restrictions exist to ensure that Saudi Arabia doesn’t experience any shortfalls in capacity, the temptation to break through the barrier remains strong with producers. Price caps remain a part of the Saudi market, with the maximum price topping out at around SAR240 ($64) a ton, well above the $115 per ton seen in Egypt in April 2014, according to Global Cement. In March 2015, the head of the cement committee at the Council of Saudi Chambers, Jihad Al-Rasheed, reportedly called on the government to lift the long-running export ban so as to sell 6 million tons of surplus clinker on the Egyptian market, while pivoting the country toward increased sales to its immediate GCC neighbors. At the end of 2014, Saudi Arabian cement producers had some 22 million tons in stockpiled clinker left over from the construction slowdown over 2012-13, according to data from Al Yamama Cement. Although the capacity utilization rate for the sector as a whole had fallen from 98% in 2013 to 93% for 2014, the clinker stockpile managed to increase by some 7 million tons over the year—nearly 50%—indicating there was a definite window of opportunity for surplus clinker sales that would not affect the construction of the leading projects the Kingdom was pursuing.

Similar to cement and clinker, rebar manufacturers have been subject to an export ban since 2008, though recent capacity additions at iron and steel plants bode well for the future. The five major manufacturers in the Kingdom produced 5.5 million tons of rebar in 2013, with SABIC’s Hadeed having a 50.9% market share, followed by Al-Itifaq (23.63%), Rajhi Steel and Yamamah (9.09% each), Al-Mikairish (5.45%), and Al-Jawhara (1.81%). By mid-2014, the price per ton of rebar was hovering around the $600-720 level, though with the demand for rebar coming strongly from government projects, market observers were seeing the $800 per ton level as a possibility. At present, Saudi Arabia remains relatively self-sufficient in terms of its requirements for iron and steel products for the construction market, with imports, especially from Turkey or China, likely only to make inroads should serious price competition be possible. SABIC, though its Hadeed subsidiary, is intending to up its production over the long term, targeting the addition of another 4 million tons per annum by 2025 to its current annual contribution in all categories of 6 million tons. This is on the back of its end-2013 opening of a 500,000 ton per year rebar manufacturing facility in Jubail, on the Kingdom’s Gulf coast.

As well, through the Saudi Guardian International Float Glass Company, the Arabian United Float Glass Company, and Obeikan Glass, Saudi Arabia is well able to take care much of its needs for glass in the construction sector. Obeikan Glass is considered to be the largest of the float glass producers, having an annual capacity of some 288,000 tons, and the company takes advantage of the cheap local energy prices to export to some 30 countries outside of the Kingdom. While glass has demonstrated it is well above the self-sufficiency level for the Kingdom, to feed the needs of the government’s ambitious development plans could even see this sector find domestic buyers beginning to dominate market share.