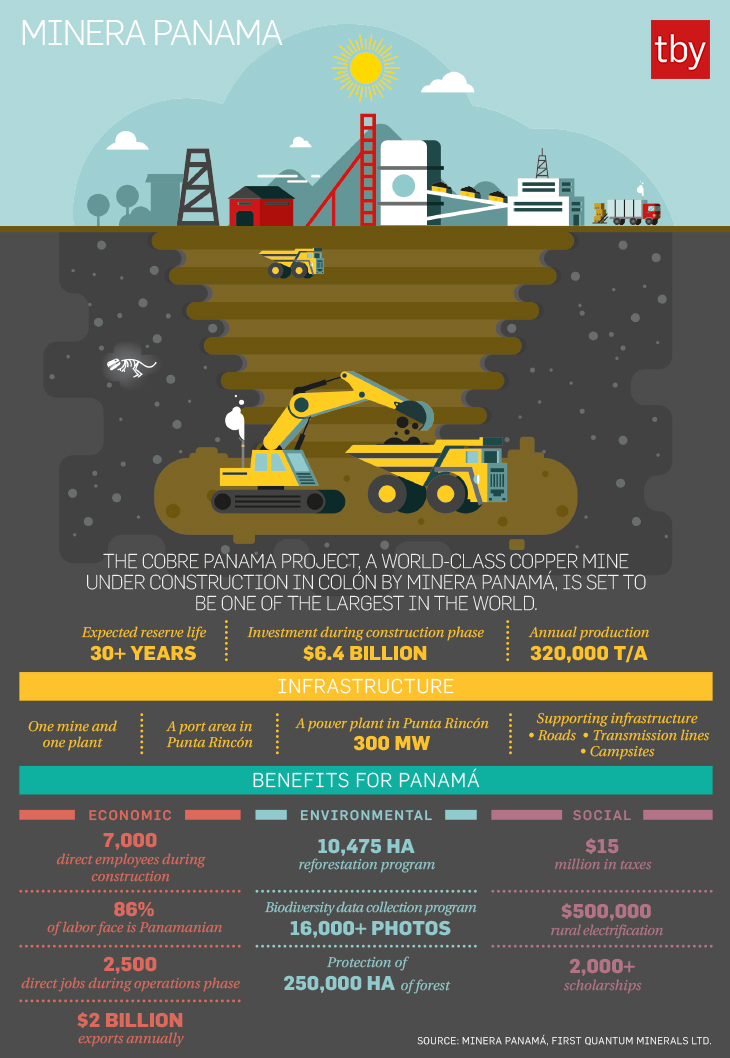 Share on:
Mining has turned into one of the fastest growing segments of the Panamanian economy, and it is expected to grow even faster now that the government has identified mineral reserves estimated at $200 billion.

The mining industry’s growth is set, with the following reserves already identified: 22 billion kg of, 12 million ounces of gold, 708,73808 kg of silver and 250 tons of molybdenum, which at current prices amounts to $200 billion. Of this total, 53% must stay in the country in the form of taxes on income and dividends

The geological structure of Panama, along with its geographical position, has allowed experts to find mineral deposits in the subsoil, such as gold and copper. The activity of the sector, traditionally focused on the extraction of limestone and sand, has been expanded to copper and gold.

The sector is crucial not only for the growth of the national economy, but also for the generation of new and well paying jobs, especially in the rural areas close to the mining sites. At the same time, the development of new mining projects in Panama will enhance and improve the existing infrastructure connecting the new sites with the surrounding villages and secondary towns.

Cobre Panamá illustrates the potential of the mining industry in Panama. This mine is the largest open-pit silver-gold and copper development project in the country. The concession is located 120 km west of Panama City and 20 km from the Caribbean Sea coast, in the district of Donoso, Colón province, in the Republic of Panama.

The topography in the concession area is low (under 300 meters), rugged, and with considerable local relief covered by dense rainforest. Climatic conditions are tropical with high precipitation levels, high humidity and relatively high temperatures of 25°C to 30°C year-round.

“Minera Panama mine will be operational in 2017, and will increase the country’s exports by a wide margin. To put it into perspective, the exports of this one mine alone exceed the income of the Panama Canal (…) This project will make the mining sector the biggest exporter in the country. Minera Panama will create more than $2 billion per year in exports of copper, coal, and silver.

The expansion of the Panama Canal will produce 1.5 billion per year. This demonstrates mining’s ability to impact the local economy” said Mr. Morales, President of Camara Minera de Panama. With an approximate investment of $5 billion (the same investment of the expansion project of the Canal), the mine will be fully operative starting in 2017, with a extracting validity of 40 years that will allow the site to produce 250,000 tons of copper on a yearly basis.