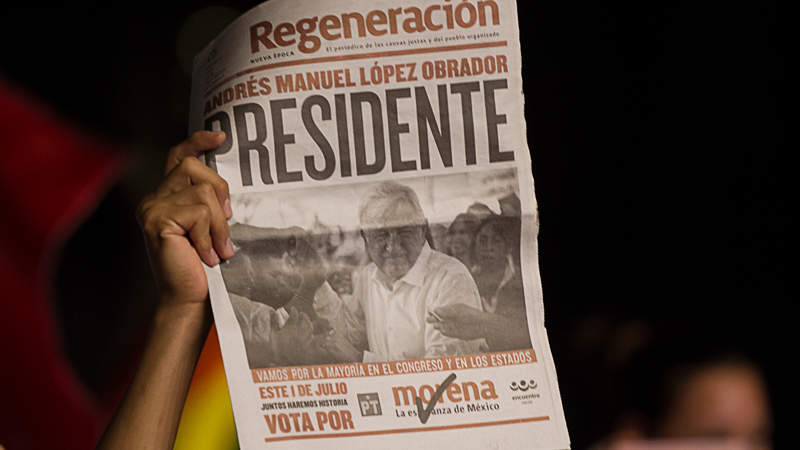 Share on:
A series of politically popular but market-averse pronouncements have sent the Mexican stock market tumbling on the eve of AMLO’s inauguration this Saturday. How quickly can he pick up the pieces?

Bringing a swift and peaceful end to what even Forbes is calling “the worst presidency in modern Mexican history,” the run-up to Saturday’s inauguration of longtime presidential hopeful Andrés Manuel López Obrador still has markets feeling rather queasy.

Though AMLO, as the affable agitator from Tabasco is known, has promised investors that macroeconomic equilibrium will be respected, nothing will be expropriated under his watch, and no new taxes raised, the market scarcely believes him: since his election on July 1, the Bolsa Mexicana de Valores (BMV) has lost 14.6% of its value, while the peso has slid 2.5% against the dollar.

Citibank, for its part, has created two separate bundles of stocks: Amlove, for the optimists, a bundle of banks and infrastructure groups; and Amscare, for the haters, a bundle of Mexican behemoths more likely to weather whatever interventionist policies may come, including Walmex, Cemex, Femsa, and Carlos Slim’s América Móvil.

On Monday, as Bloomberg reported, Amlove stocks tanked, largely thanks to a 8.5% selloff in the Mexican banking sector—pushing the country’s benchmark equity index to its lowest in nine years and the BMV to its biggest nadir since 2015.

Apart from a longstanding malaise in the investor community over AMLO’s intentions, November’s selloff was triggered by three events: first, in late October the president-elect canceled plans for a new USD14 billion airport in Mexico City.

The country’s most expensive megaproject in a century, as one design magazine drooled, the airport, first proposed in 2014, was to be the signature landmark of Enrique Peña Nieto’s presidency.

A glittering Norman Foster-designed project in partnership with Mexican architect Fernando Romero, son-in-law of Carlos Slim, the Nuevo Aeropuerto Internacional de la Ciudad de México was meant to handle up to 125 million annual passengers by 2022, a capacity dwarfing even the world’s busiest, Atlanta Jackson-Hartsfield, which saw 104 million in 2017.

Firms controlled by Slim were to have an 8% stake in the airport’s construction, which if completed would have been the Western Hemisphere’s largest by a long shot. It was to serve nearly three times more passengers than the current Benito Juarez International Airport’s 46m passengers, a figure already 50% more than the 32m it was upgraded for in 2007.

Whereas the move to cancel the airport surprised few, capital markets were more jostled with AMLO’s second major “blunder”: his announcement on November 8 that he would scrap a number of bank commissions.

Though totally “in line with international practice,” according to the bloodthirsty radicals at Bloomberg, his plans to scrap ATM fees and commissions on balance requests and local bank transfers were met with great trepidation by the investment community.

Not only do foreign banks have a particularly robust share of the Mexican retail banking sector—of the seven banks controlling 78% of the country’s banking industry (BBVA Bancomer, CitiBanamex, Santander, Banorte, HSBC, Inbursa, and Scotia Bank), only two are Mexican—they also rely on such commissions for up to 30% of their revenues, according to watchdog Condusef.

Though AMLO backed down a day later, scrapping the commissions is still a part of his political party Morena’s platform, which after July’s landslide will have hefty majorities in both Mexico’s lower and upper houses come Saturday.

And the real kicker came when Cofece, the Federal Competition Commission of Mexico, sent a letter to the Mexican senate on November 21 requesting further study on the issue of bank commissions, markets took their much-anticipated plunge.

The third thing nagging investors is AMLO’s import of a somewhat awkward model of participative democracy.

Holding his first such ‘consulta ciudadana’ on the eve of scrapping the new airport, in which just shy of a million citizens sided with him, he held his second on whether to build El Tren Maya, a hugely ambitious rail and infrastructure project to connect and economically stimulate the country’s traditionally impoverished southeast, on November 24 and 25.

Part of a broader package of 10 social and infrastructural spending projects, El Tren Maya will connect major archaeological points of interest scattered across the former Mayan Empire in the states of Chiapas, Tabasco, Campeche, Yucatán, and Quintana Rosa, connecting the tourism hubs of Cancún, Tulum, Calakmul, Palenque y Chichen Itzá in the process.

Estimated to cost between USD6-8 billion—but half of the new airport—El Tren Maya was ‘approved’ by 89.9% of the 946,000 respondents that showed up to the referendum.

Of the other spending projects on offer, the construction of a new refinery at Dos Boscas in Tabasco was approved with a 91.6% majority, while a train across the Isthmus of Tehuantepec, connecting the Pacific ocean with the Gulf of Mexico, was supported by 90.3% of participants.

Of the remaining proposals, each passed with resounding majorities: the planting of a million trees (94.7%); the doubling senior citizens’ monthly pensions (93.3%); scholarships for a million handicapped persons (92.9%), 2.6 million unemployed youth (91.1%), and every high school student (90.1%); medical attention for the poor (95.1%); and free wifi in public places and buildings (91.6%).

If you build it

Yet how he will pay for even El Tren Maya remains unclear. Though the Impuesto del Turismo (tourist tax) will help towards its completion, the USD370 million this brings each year will barely make a splash in the railway’s overall USD6-8 billion price tag. Though pledging to finance it through a series of public-private initiatives, he has failed to specify what these are.

None of this is to mention the looming diplomatic catastrophe that could accompany the marching humanitarian one, as 7,000 Central American migrants make the last of the 4,400km schlep across Honduras, Guatemala, and Mexico to the US border as we speak.

Meeting the caravan with an additional 5,800 American troops (at a price tag of USD220 million), President Trump has also threatened to deploy lethal force against the caravan, a nightmare scenario for an incoming Mexican president who has long claimed to carry the people’s torch.

All the same, there may be room for optimism. As analysts from the Pacific Investment Management Company (Pimco) emphasized earlier this week, the Mexican peso is two standard deviations below its long-term average, making it the country’s cheapest asset of all, while real one-year interest rates, at a 13-year high of 4.8%, are the second-highest of emerging-market economies in the world.

Should AMLO deliver a sensible budget by December 15, as his mandate demands, Pimco reckons solid gains are to be had in a spooked market that has “over-extrapolated the risks to Mexican creditworthiness” and the “profligate leftist’s” propensity to take up the pitchfork.

Passive observers will know soon enough; for the less risk-averse, Christmas of a sort may very well come early.