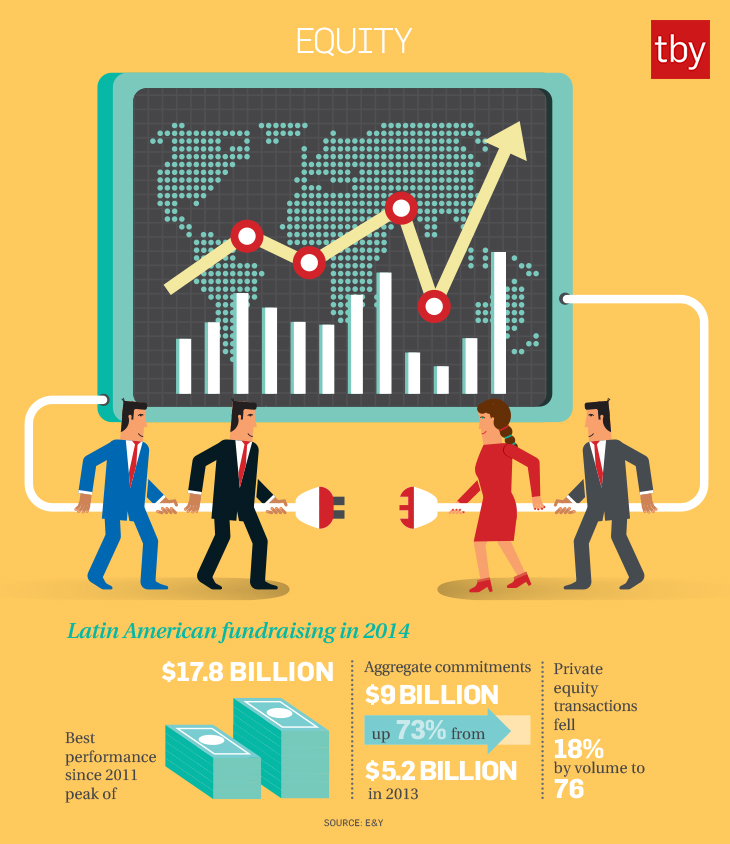 Share on:
Peru has an emerging private equity movement that has the potential to be a transformative force within the national economy.

Although Peru’s private equity market is composed of both international and domestic players, thus far locals have made the vital contributions. The biggest players were interviewed in preparation for The Business Year: Peru 2015, while others have done so anonymously, as private equity firms around the world sometimes do.

Underdeveloped capital markets and expensive bank financing across many emerging markets means that private equity occupies an especially interesting space in EMs generally, and in Peru specifically. The SME financing gap in EMs was estimated at $1 trillion by a recent Oliver Wyman report, and a Credit Suisse report found that while in developed markets banks provided a quarter of corporate loans, in EMs they provided half. The reliance on banks is indicative of the tenuous position many growing companies find themselves in, especially when they reach critical growth points of $50 million to one $100 million in annual revenue

In Peru several factors are behind a shortage of capital at high-growth firms. Pervasive informality, an illiquid exchange with a high barrier to entry, and a local bond market that saw a drop in activity in 2014 where issuances is typically only by established firms and banks. The dénouement is hungry mid-sized companies. And while in many cases informality and poor governance preempt opportunity cost as reasons for exclusion from capital markets, private equity firms have found niches in the Peruvian market through several distinct strategies.

First, there are industry focused local funds that derive most of their funding from the nation’s private pension funds. Then there are international PE firms who bring a mix of external capital and local investment, usually also from the pension funds. Then there is Nexus, which is an outlier, which operates as an investment vehicle for Intercorp, and uses little if any external capital.

Starting from the early 2000s, Peru’s private pension funds or AFPs began to systematically invest in Private Equity (PE) funds. There are strict limits on the amount of investment that can be channeled to ‘special funds’ due to the risks inherent in PE structures, but the capital available from the three largest AFPs, Prima, Profuturo, and Integra is adequate to create a PE market.

Renzo Ricci Cocchella, the Managing Director of AFP Prima, was bullish about recent pension fund reforms in Peru that raised investment percentage limits on an ‘Alternative Funds’ category that included private equity. Regarding increased limits, he explained that, “…this third pillar was the best outcome of the reforms.”

Nexus, the local fund that Mr. Grados mentioned, is the project of Carlos Rodriguez Pastor, one of Peru’s richest citizens, and the Chairman and CEO of the Peruvian giant Intercorp. It is somewhat of an outlier in terms of strategy and structure, but it is probably Peru’s most successful Private Equity firm. Nexus brought the first PE facilitated IPO when it launched InRetail on the Bolsa de Valores de Lima in 2012 and raised $400 million in what was at the time the largest IPO in five years.

InRetail debuted at the tail end of the high side of a commodities cycle, but its instant success points towards Peru’s retail-happy middle class and growing access to credit. The IPO also powered Nexus to a string of other high-profile acquisitions, all targeted at middle-class needs and demographic driven growth, such as Innova Schools, a private education firm with progressive methods, NG Restaurants, which owns a basket of international and domestic restaurant brands, and Salud Total, which provides services to the Health Sector.

Other local funds include Enfoca, Sigma, Summa Capital Partners, and Altra Investments. All receive the majority of their funds from AFPs, and are mostly focused on a specific industry. Altra has invested heavily in logistics, while Sigma is focused on infrastructure, while Enfoca has participated in important retail transactions, most notably the sale of Maestro, a home supplies store, to the Chilean giant Falabella for $492 million. Notably, AFPs who invested with Enfoca received a profit of $231 million as a result of this sale, a sum that will pay the pensions of thousands of Peruvians.

International firms active in Peru include Carlyle Group and Abraaj, two firms with divergent approaches to the market. Carlyle Group has continued the leveraged buyout strategy that earned it a reputation in the US. Carlyle acquired JV Resguardo, which owned two prominent security firms in Peru, for an undisclosed sum in 2014. Negotiations to acquire a second security firm, Hermes, are reported to have collapsed in early 2015, but Carlyle still has a large amount of capital to work with of its $300 million.

Abraaj, an international player based in Dubai with significant investment in many of the world’s high-growth markets, has invested in Condor Travel, one of Peru’s major tourism firms, and in Acurio Restaurants, the rapidly growing firm owned by Peru’s most famous chef, Gaston Acurio. Both of these deals were made on privileged access but for minority stakes, a strategy that has served Abraaj well in other markets. Both Condor and Acurio are top players in their field, with international reach.

All of the sectors where Private Equity has become a force, with the exception of mining-linked transport companies invested in by Altra, are not directly connected to the nation’s mineral wealth. The fastest growing and most reliable sectors of the economy as identified by TBY ‘s interviewees in 2015, were in infrastructure and retail. The trend of non-mining investments by PE firms highlights Peru’s strong middle class and its continuing diversification.

Private equity activity has made progress towards filling the financing gap in the Peruvian market by snapping up companies with excellent potential at an early stage. It has also changed the standard of organization and corporate governance in Peru, as many medium-sized business owners explained in interviews with TBY that they understood their businesses needed to be professionally and transparently managed to be acquired. Overall, Private Equity remains small fry in Peru’s financial sector, but nonetheless has been involved with some of the nation’s most notable deals over the past five years. When the next round of exits materializes, more recognition will likely follow.