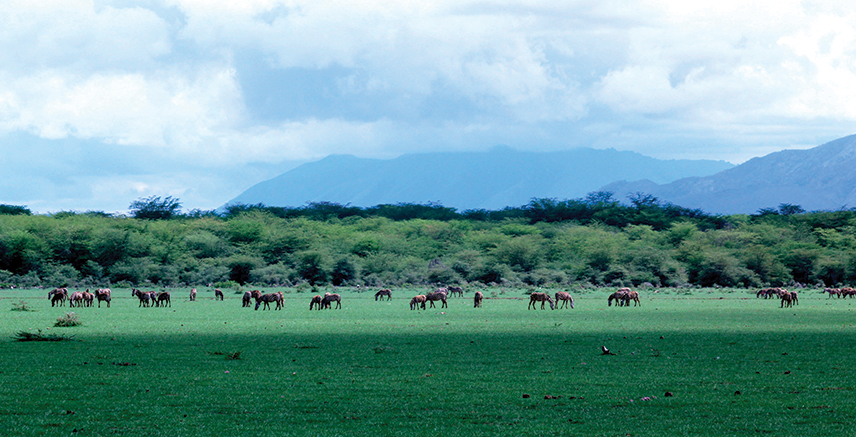 Share on:
By improving infrastructure and diversifying its offering, Tanzania's tourism sector is poised for a new wave of growth.

Famous for the tallest free-standing peak in the world, Mount Kilimanjaro, coveted for the natural beauty of the Serengeti plains, and legendary for the exotic island of Zanzibar, Tanzania is no stranger to tourists. However, with the goal of attracting 3 million tourists per year by 2018, government tourism organizations are spearheading new programs and drawing attention to some of the lesser known, but no less fascinating, destinations in Tanzania.

Nearly half of the country’s land is dedicated to national parks or game reserves. In total, Tanzania has 16 national parks, 29 game reserves, and 40 controlled conservation areas and marine parks. In 2015, tourism grew to comprise 17% of GDP, while 25% of the foreign currency inflows to Tanzania were sourced from the tourism sector.

Breathing new life into the sector, the Tanzania Tourist Board (TTB) has coined a fresh slogan for the country. In 2017, visitors will become acquainted with Tanzania as “The Soul of Africa,” a concept the TTB believes perfectly captures the beauty of the country. This comes after archaeologists discovered the oldest remains considered to be human in Tanzania in 2013, giving even more credence to the slogan, which encapsulates the earliest beginnings of life in the country.

To support the sector, the Ministry of Natural Resources and Tourism is the watchful eye over each site, ensuring that the natural beauty of the country continues to be well preserved. In regards to 2017, Minister Jumanne Maghembe told TBY that the ministry “will invest more in tree planting in new extension areas, the protection of existing forestry resources for water catchments, and the creation of new nature reserves to ensure total conservation of areas with exceptional flora and fauna.” The ministry’s vision is the sustainable conservation of natural and cultural resources and the development of responsible tourism, while its mission is to conserve natural and cultural resources sustainably and develop tourism for national prosperity and the benefit of mankind through the development of appropriate policies, strategies, and guidelines; the formulation and enforcement of laws and regulations; as well as the monitoring and evaluation of policies and laws.

Tanzania has a wealth of both well-known touristic sights and attractions off the beaten path. The most famous landscape to behold is Mount Kilimanjaro, seated near the town of Moshi in a protected area of 1,668sqkm. The mountain itself offers breathtaking views and challenging hikes. On the lowland slopes, visitors can see vast areas of farmland, with coffee, banana, cassava, and maize crops. Once inside the park, thick lowland forest covers the lower altitudes and breaks into alpine meadows at higher points.

Next is the Serengeti, where a spectacular annual animal migration takes place. Easily Tanzania’s most famous national park, the Serengeti is also the largest, at 14,763sqkm of protected area bordering Kenya’s Masai Mara Game Park. The Serengeti boast vast grassland plains with iconic acacia trees. In addition, the kopjes, or small hills throughout the plains, are home to rich ecosystems. Visitors have the opportunity to see lions, elephants, giraffes, gazelles, and monkeys, as well as a range of additional African wildlife.

Meanwhile, Zanzibar’s coastline offers beaches, coral reefs, and sandbars to explore. The port city of Stone Town is the main attraction on the west coast of Zanzibar, and Mangapwani, with caves visible at low tide, is worth the two-hour drive away. In addition, Chole Island Marine Park, as well as nearby Prison, Grave, and Snake Islands are perfect for a day trip from Stone Town, allowing guests to discover the winding passages of the old city. Zanzibar in particular has seen a tourism boom in 2016, with an increased number of arrivals edging closer to meet goals set for 2020. According to the Zanzibar Association of Tourism Investors (ZATI), tourists arrivals in 1H2016 had already exceeded the number of arrivals recorded for the whole of 2015. In an interview with All Africa News, ZATI Chairman Seif Miskry reported, “We are on track for meeting the Vision 2020 target of reaching 500,000 tourists per year. What counts now is making sure that the government listens to the private sector.”

The Ngorongoro Crater is also a Tanzania must see. Also known as the Eden of Africa and the eighth wonder of the world, Ngorongoro was formed by a volcano that erupted 2 to 3 million years ago, after which it collapsed to form a large crater. The steep sides of the crater soon became a natural enclosure for a wide variety of wildlife. Ngorongoro is also one of the few places left on Earth where visitors can spot the endangered and elusive black rhino.

Other areas of interest include Lake Victoria, the source water body of the Nile, the Selous, one of the largest game reserves in Africa, and Lake Tanganyika, the deepest and longest lake in Africa.

For 2017, the Tanzanian government will continue to work on boosting the tourism image of the country as not only a safari destination, but also as a country with a long coastline dotted with pristine beaches. Although hiking and trekking are two of the more popular activities in Tanzania, there are numerous locations along the Tanzanian coast, including the island of Pemba, where tourists can enjoy beaches and water activities. The island is known as the “Green Island” in Arabic, and geographically falls into the archipelago locals refer to as “the Spice Islands.” While Zanzibar continues to become more popular with tourists and thus susceptible to overcrowding, Pemba provides a low-key alternative for the more adventurous traveler. The island is especially popular with divers, who can explore vast strips of relatively untouched coral and abundant marine life. Also within reach is Mafia Island, with a population of around 40,000 people. Its name derives possibly from Swahili mahali pa afya, meaning “a healthy dwelling-place,” or from the Arabic morfiyeh meaning “archipelago.” Like Pemba, Mafia Island attracts scuba divers, fishermen, and leisure travelers seeking a place to relax. For 2017, the government is in talks with investors to create more designated tourism areas on the coast, with one planned near Dar es Salaam, and another as part of a marina project south of Kilwa.

In 2012, Tanzania identified the nine primary source markets of tourism: the US, the UK, Germany, Italy, Canada, France, Australia, the Netherlands, and Spain. In addition, the authorities targeted the BRICS—Brazil, Russia, India, China, and South Africa—as well as the UAE, and the African continent itself. By launching concentrated marketing efforts geared toward these areas, Tanzania, and the TTB in particular, hope to make great strides toward the overarching goal of attracting 3 million tourists per year. In addition to targeted marketing, efforts are being made to widen the tourism offering away from sightseeing and attractions toward facilities that could generate more MICE activity, specifically the development of cutting-edge conference facilities, such as the Julius Nyerere International Conference Center in Dar es Salaam, as well as the expansion of the Arusha International Conference Center. Tanzania has also seen an increase in interest in sports tourism. “The recently built National Stadium in Dar es Salaam draws hundreds of sports events to Tanzania. We also have key international marathons such as Kilimanjaro, Ngorongoro, and Rock city, which also attract athletics from all over the world,” Devota K. Mdachi, Managing Director of the TTB, told TBY. Picking up on the trend toward experiencing cultural events and experiencing the local way of life, Zanzibar’s International Film Festival (ZIFF), East Africa’s leading music festival Sauti Za Busara, and the annual festival at Haydom Cultural Centre have the potential to become staples of the Tanzania tourism offering. The TTB continues to stage the Swahili International Tourism Expo (SITE), Tanzania’s leading tourism event, which attracts hundreds of exhibitors and trade visitors. In total, the TTB offers 60 unique tourism-related products designed to boost the number of tourists and create a long-lasting impact on the success of the sector at large.

Experts have identified a host of potential growth areas, expected to prove both lucrative for investors and beneficial to the local economy. Right now, there are many opportunities for both local and foreign investors in the tourism sector. Tanzania welcomes investments in accommodation facilities, entertainment venues, national parks, convention centers, casinos, recreational facilities, restaurants, and sports facilities, as well as transportation and infrastructure.

The government’s initiative to complete and open a new airport terminal at Iringa is set to expand the number of visitors to the southern regions of Tanzania. Long considered one of the most significant obstacles in opening up new areas of the country, the lack of tourism-related infrastructure is being remedied with the arrival of new aircraft and the expansion of the Air Tanzania fleet since October 2016. Up until then, the only way to see areas of the West and South was by small, chartered aircraft with expensive airfare. Now, tourists “will able to travel on regular flights to Kigoma… then on to Dar es Salaam for USD150, instead of having to pay USD1,600 for chartered flights,” Minister Maghembe explained to TBY. The government also allocated USD10 million for a new Boeing to add to Air Tanzania fleet in 2017, with three more aircraft scheduled to arrive in June. The new fleet, which is tailored to revive Tanzania’s national carrier, includes two SC 300 jets with up to 300 passenger seats and one Bombardier Dash 8400. New aircraft and improved airport facilities also bode well for the overall number of tourists entering Tanzania, as airlines from around the world will be accommodated on routes to Dar es Salaam. “More international airlines will be coming to Tanzania, meaning more passengers and more tourists,” the TTB’s Mdachi concluded.