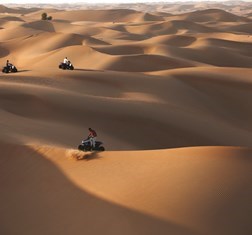 Share on:
After a record-breaking year in 2017—the Emirate attracted 4.88 million visitors—Abu Dhabi expects to attract even more in 2018, with estimates of nearly 6 million hotel guests, the Director General […]

After a record-breaking year in 2017—the Emirate attracted 4.88 million visitors—Abu Dhabi expects to attract even more in 2018, with estimates of nearly 6 million hotel guests, the Director General of Abu Dhabi’s Department of Culture and Tourism, Saif Saeed Ghobash, confirmed. Looking at the Emirate overall, visitors to Abu Dhabi city increased at a higher pace (10.3%) than the Al Ain region, accounting for 88% (4.29 million) of tourists to the Emirate. Visitors to the city were able to benefit from the wide offer of 131 hotels.

Meanwhile, the Al Ain Region, with 20 hotels, accounted for 9% of tourists, after experiencing an increase of 5.5% and approximately 450,000 visitors. The Al Dhafra region and its 11 hotels grew its arrivals by 8.2%, to 130,180. Despite all these, arrivals in 1Q2018 and 2Q2018 to Abu Dhabi International Airport (AUH) declined by around 10% compared to the same period in 2017, which implies growing traffic through Dubai International Airport (DXB) and Dubai Al Maktoum Airport (DWC).
By nationality, tourist arrivals from China in 2017 saw the highest increase, at 61%, totaling 372,433 tourists. This extraordinary increase makes China the most important tourism market for Abu Dhabi and comes after a strategy in the country marked by the introduction of visas on arrival for Chinese citizens in 2016.

The second-largest tourism market for Abu Dhabi is India, from where tourist arrivals reached 360,364, with an increase of 11% versus 2016. Following a very intense and innovative marketing campaign by Abu Dhabi’s Department of Culture & Tourism (DCT) in the UK and the US over 2017, these two source markets yielded an increase in tourists to the Emirate of 14% and 24%, respectively, over that period.

The success of Abu Dhabi’s tourism sector is partially due to the opening of new tourism attractions that have drawn the attention of frequent travelers worldwide. The opening of the Louvre Abu Dhabi in November 2017 has strengthened its cultural offering, adding to landmarks such as the Sheikh Zayed Grande Mosque. Launched in 2018, Abu Dhabi Culture app will serve as a handy travel tool for culture seekers in the Emirate.
With operations starting in July 2018, Warner Bros. World Abu Dhabi will become one of Abu Dhabi’s top destinations for families. One of the world’s largest indoor theme parks, it offers various immersive worlds, from Gotham City to Cartoon Junction. Also set to open in 2018, CLYMB will be Abu Dhabi’s world’s largest flight chamber, offering guests the opportunity to simulate the experience of skydiving within an unmatched width of 32 feet.

MICE tourism will keep playing a vital role in the dynamism of Abu Dhabi’s tourism sector. The city has moved up to second place on Ipsos’ “Top city to do business in” ranking. The Emirate’s efforts to attract internationally renowned events have paid off, as The Abu Dhabi Convention Bureau has won bids to host events including the World Roads Congress 2019, the World Energy Congress 2019, the World Congress of Nephrology 2020, the World Conference of Family Doctors 2020, the Congress of the World Union of Wound Healing Societies 2020, and the World Urban Forum 2020.
In an interview with TBY, Humaid Matar Al Dhaheri, Group CEO of Abu Dhabi National Exhibitions Company (ADNEC), stated “ADNEC witnessed a steady growth in the number of exhibitions and events hosted in the past year, which reflects the robustness of our diversified national economy and the growing confidence of global investors in its long-term outlook.” Industry players also believe a crucial factor that will determine the pace of growth for business tourism will most certainly be not only the quality of events that the city will host, but also the diversity within the region and its closer neighbor Dubai.

Abu Dhabi has employed a visa facilitation strategy in order to maintain its tourism momentum. In 2017, DCT Abu Dhabi rolled out the new Advanced Visa System, which enables hotels and other establishments to issue tourist visas.

At the same time, the Emirate has been capitalizing on the passenger traffic at Abu Dhabi International Airport by offering transit visas for passengers of any nationality wishing to make a visit of up to four days. This initiative has been part of the “Life in Abu Dhabi” program, designed by the government to attract stopover visitors and spark their interest in potential future visits for a longer period.