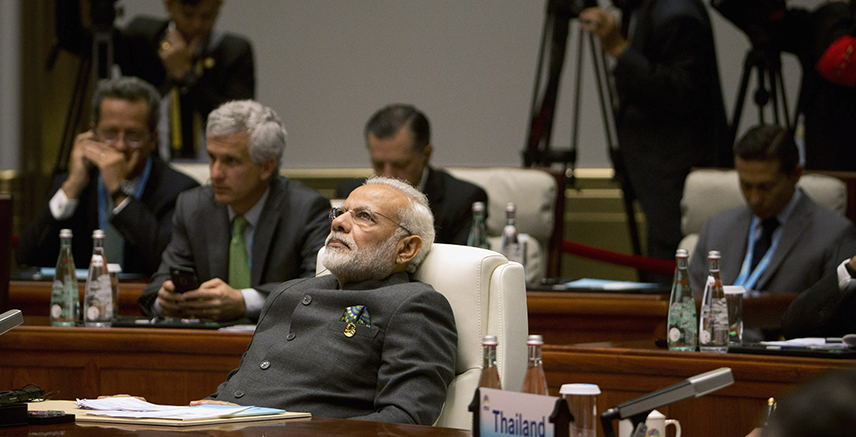 BRICS summit kicks off in China

Share on:
In a week of nuclear threats on the Korean peninsula, the BRICS nations have been meeting in Southern China to discuss their disparate destinies.

Indian Prime Minister Narendra Modi listens to a speech during the Dialog of Emerging Market and Developing Countries in Xiamen in southeastern China’s Fujian Province, Sept. 5, 2017
€¨
In a week of nuclear threats on the Korean peninsula, growing concerns over climate change, corruption scandals tarnishing political careers, and depressed commodity prices halting economic development, the leaders of the world’s leading emerging economies gathered in Southeast China’s Xiamen to look at what the future might hold.

The BRICS Summit 2017 began on Sunday. Having captured the world’s attention in the first decade of the 21st century, the group composed by China, Russia, Brazil, India, and South Africa has lost some traction in recent years.

Nowadays, with China pushing its One Belt One Road (OBOR) initiative and Narendra Modi heading one of the most ambitious financial reforms in India’s history, the two Asian BRICS nations seem to be on track.

But Russia, South Africa, and Brazil have suffered from corruption scandals and the fall in natural resource prices over the past decade and a half. While their stories are very different, they all seem determined to make the most of their political and economic advantages.

This year’s summit has already produced some novelties. For the first time, China has agreed to include Pakistan-based terror groups, which target India specifically, in the joint declaration by the member’s leaders.

The naming of Jaish-e-Muhammad and Lashkar-e-Taiba groups alongside Al-Qaeda, the Taliban, ISIS, and other international terrorist organizations on the list of proscribed terrorist groups has been hailed as a political success for India.

This does not suggest a worsening of relations between China and Pakistan, but is rather a pragmatic decision on the part of the former in order to ensure the success of OBOR.

Furthermore, the joint statement has placed a firm focus on global peace through diplomacy. “BRICS countries are committed to upholding global peace and contributing to the international security order,” Chinese President Xi Jinping announced to the audience.

Three issues formed the basis of the statement, the first of which being condemnation of the recent North Korean nuclear tests. Secondly, references to the more than 70-day standoff between Indian and Chinese forces at Dokalam two months ago, when Indian forces stopped the Chinese military from building a bridge in Bhutan, an important consideration if OBOR is to move forward. Thirdly, on a more global level, China presented itself as more willing to assert its position opposite US President Donald Trump’s America.

The Chinese leadership seems quite aware that if its OBOR initiative is ever to produce economic results, it needs to go hand-in-hand with the country’s growing role as a political and military world power.

That said, the group’s goals remain largely economic, and Beijing has been quick to act in that arena. The Chinese president announced the commitment of USD76.4 million for an economic and technology cooperation fund for the BRICS countries.

On top of all this, there have been strong pushes to establish a credit rating agency backed by the five BRICS nations. Representing 40% of the world’s population and 25% of global GDP, this plan could have the strength to tackle the long-standing and much-criticized hegemony of the “Big Three” US rating agencies.

S&P, Fitch, and Moody’s have for long been accused of undervaluing credit ratings in developing economies to the benefit of western investors, and also criticized for their monetization system dubbed the “issuer pay model”, which is arguably conducive to conflicts of interests.

A BRICS-backed agency could challenge the US dominance, but it will have to be able to convince investors that its assessments are not politically motivated, but fair and independent.
If it can offer an alternative to the issuer-pay model, it might accomplish this. However, a duplication of the US model seems more likely, and therefore less likely to succeed.

Alongside the recently-established BRICS New Development Bank, one thing is certain: there is strong commitment to shifting the focus of political and economic dominance from the US and Europe to other regions of the world.

This is particularly clear in the cases of China and India, which have made their voices ever more present in context of growing military tension and shrinking political will for dialog.

Above all, the summit has served the purpose of establishing a united voice for these economies, stating loudly that the West no longer controls all of the means of promotion of economic development.