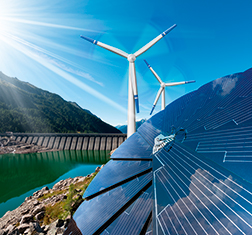 Share on:
Over USD163 billion is being allocated toward renewable energy projects in the UAE. Abu Dhabi is at the forefront of the push to conserve the environment and boost its economy with green initiatives.

The green economy is becoming increasingly ubiquitous in the Gulf region, and nowhere is the concept of environmental friendliness stronger than in the Emirate of Abu Dhabi. Its natural resources include 16 habitat types, nine of which are terrestrial and seven marine. Abu Dhabi’s environment is characterized by desert in the central and western regions, rugged terrain in the south, alluvial plains in the east, while salt flats, sand dunes, and sheets with shrub cover along its coast. Home to 432 plant species, 51 mammal species, 427 bird species, 54 reptile and amphibian species, 456 types of fish, and 2,219 terrestrial invertebrate, Abu Dhabi is exceptionally diverse. Emerging to preserve its unique geography and wildlife is the Environment Agency Abu Dhabi (EAD), established in 1996. The governmental entity’s 1,100 employees, 65% of whom are Emirati nationals, are leading the charge to protect and manage biodiversity, maintain a clean environment, and promote sustainable development. At present, EAD has monitoring programs in place for 24 key species in nine habitats, with the goal to improve its ability to systematically identify any changes in the Emirate’s biodiversity. The agency is actively working to increase terrestrial protected areas from 10% in 2015 to 16% in 2020, supporting the conservation of various species. The agency also has aims to adjust the local sustainable fisheries exploitation index from 13% to 20% over the same timeframe.

Under its 2016-2020 framework, the EAD’s extensive plans are expected to revolutionize the green economy in a variety of areas. Specifically, the organization is working to address the unsustainable use of groundwater, protect air and water quality, prepare for the local impact of climate change, improve waste infrastructure, and prevent land pollution and soil degradation. The entity is also actively working to raise environmental awareness, thereby ensuring that environmental issues remain a top priority on the national agenda. By partnering with other government entities, the private sector, NGOs, and global environmental agencies, the EAD is striving to embrace international best practices and use innovation to institute effective policy measures.

One such partner entityis the Abu Dhabi Global Environmental Data Initiative (AGEDI). “In order to maintain our quality of life we must monitor and manage our environment,” Ahmed Abdulmuttaleb Baharnoon, Acting Director of AGEDI, told TBY. “In that sense, data is fundamental to our understanding the state of and trends within the environment. The design of policy requires an extensive understanding of the way the environment works and interacts with our social and economic systems, and that knowledge derives from research and monitoring.”

As the world’s most precious resource, water has come into focus as a key challenge for Abu Dhabi going forward. Recent statistics point to the fact that Abu Dhabi’s water supply is dwindling rapidly, with some specifying that the Emirate needs to invest at least USD2 billion into water desalination over the next five years in order to keep up with demand.

The EAD has responded by setting achievable targets to decrease water consumption, while other public and private operators in the sector are committed to educating the local population regarding water usage. As part of the targets for 2016-2020, the EAD is aiming to reduce the total volume of groundwater extracted annually from 2.2 million cbm to 1.82 million cbm. As well, the plan will contribute toward increasing the amount of usable groundwater reserves and reducing the volume of groundwater used in agriculture. Concurrently, the EAD is working to reduce or at least maintain groundwater salinity levels and recycle water where possible, and encourage the reduction of water used in forestry by 28% for 2020. In an interview with TBY, Alan Thomson, Managing Director of Abu Dhabi Sewerage Services Company (ADSSC) said, “Most people do not think too hard about the utilities they use, including water. We still have an important role to play in conveying to people that water is a limited resource and that its usage has a huge impact on the environment.”

In a visionary move, the National Bank of Abu Dhabi (NBAD) issued the region’s first “green” bond for a total of US587 million. The five-year bond is set to be listed on the London Stock Exchange in 2017, priced at a spread of 98 basis points over mid-swaps, and pay a coupon of 3% annually. NBAD’s bond sets a record at approximately 72% larger than average corporate or government green bonds issued in 2016.

Under the premise of supporting the green economy, the bond must abide by certain environmental guidelines known as the “green bond principles,” established by the International Capital Market Association. Two of the projects directly supported by the bond are being undertaken in the UAE: the 100MW Shams concentrated solar power plant in Abu Dhabi and the Etihad Rail network.

Feeding into the growing stream of public institutions that support the green economy is Abu Dhabi’s UAE University (UAEU), where a team of scientists has developed a new type of material from agricultural waste that can be used as building insulation. The project’s innovative solution demonstrates one of many viable ways to provide energy savings to make insulation from agricultural waste. According to the head of the project, recycling agricultural waste is cost effective, requires less energy to make, and is more environmentally friendly than using traditional polymer derived from crude oil.

Private-sector players ranging from waste management to real estate and construction companies and biofuels producers are also stepping up to support Abu Dhabi in achieving its green goals.
Recently, the Park Hyatt Abu Dhabi Hotel and Villas was awarded the prestigious LEED certificate for its resource efficiency. In line with the wider 2016-2020 plan, the hotel uses significantly less water and energy, which reduces greenhouse gas emissions overall. The hotel developer is also a pioneer in terms of designing infrastructure for green initiatives such as specialized irrigation that reduces landscape water consumption by 50% through the creation of dry wadi beds, as well as the planting of native vegetation that complements the local climate.

Dubbed the “world’s most sustainable eco-city,” Masdar City is another pioneer in the push toward eco-friendly solutions. Since construction began in 2008, Masdar City has grown to encompass 6sqkm and has already become a hub for leading green technology companies such as Siemens. It is also home to the global headquarters of the International Renewable Energy Agency (IRENA), one of the world’s key environmental watchdogs. Buildings in Masdar City have proven to be 72% more energy efficient than traditional concrete structures, with tests showing that its energy consumption also outperforms the vast majority of modern housing by 45%. In addition, solar panels on the city’s eco-villa homes generate enough energy over the course of a year to effectively run without drawing any energy from Abu Dhabi’s main power grid.
Masdar City has already begun to draw attention from global investors. In early 2017, top executives from both Etihad Airways and Boeing visited a unique integrated seawater and agriculture system facility in Masdar City—the world’s first project that combines seawater and natural aquaculture fertilizer to grow plant biomass that can be converted into aviation biofuel. Demonstrating its futuristic vision, Masdar acquired a 25% stake in Hywind Scotland, the world’s first offshore floating wind farm, in 1Q2017. The farm is a 30MW pilot project floating off the northeast coast of Scotland. Hywind Scotland is Masdar’s JV with Norway’s Statoil, which holds a 75% stake. Saudi Aramco also signed a MoU with Masdar in April 2017. Under the guidelines of the agreement, Masdar and Saudi Aramco are due to collaborate on sustainable development and renewable energy, which will yield considerable advancements in terms of clean electricity generation, reducing carbon emissions in Saudi Arabia, the UAE, and the world at large.

Tadweer, Abu Dhabi’s privately run center of waste management, is looking at leftover cooking oil, grease, and fat collected from kitchens across the Emirate as a source for producing biodiesel under a new recycling scheme. The company will provide the permits needed for small businesses to be able to produce the environmentally friendly alternative to regular diesel for use in buses and trucks. Already commonplace in Dubai, the reuse of cooking oil is expected to gain traction in Abu Dhabi over the short term. Generally, Tadweer is building and implementing integrated waste management and pest control systems, with the higher aim of converting all waste into valuable economic resources. The company’s ambitions fall into line with EAD’s intention of decreasing the amount of municipal waste produced per capita per day from 1.9kg in 2015 to 1.5kg in 2020. The collaboration between public and private entities will be vital toward the development of integrated waste plans. As EAD improves the Emirate’s waste regulatory framework and ensures effective enforcement and widens the availability of waste management data, Abu Dhabi will benefit from greater awareness and education regarding waste reduction, reuse, and recycling.

Looking ahead, it will be paramount to raise awareness and disseminate key information to the local community regarding sustainability. At the same time, attracting investors to green opportunities is expected to take precedence. The EAD has laid out a quantifiable target to increase stakeholder environmental awareness from 71% to 82% by 2020; through its work with both the governmental and private sectors, the EAD is on track to promote and encourage resource efficiency. Another key factor going forward will be to ensure that the right educational initiatives are in place to create the appropriate green economy workforce. To that end, the government is working on specific environmental outreach programs and education activities that speak to some of the EAD’s strategic priorities. For many sustainable initiatives, maintaining low employee turnover rates, as well as attracting, developing, and retaining qualified and high-performing staff, will be crucial for long-term success.