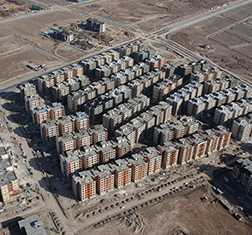 Can we build it?

Share on:
The largest construction market in the Middle East at the moment, Iran is the land of opportunity for investors looking to capitalize on the country's opening.

Iran has emerged as the land of boundless opportunities after the country signed a deal to lift international sanctions that have been in place for several years, turning a new page in its ties with the world. The Islamic Republic of Iran is expected to emerge as one of the biggest and most promising markets in the Middle East, in large part due to the 80 million potential consumers in the country, its vast oil and gas reserves, strategic location, and numerous exciting investment opportunities for companies around the world. The country has seen a flurry of investments across a whole range of sectors since January 2016, and one of the most promising sectors—if not the most—looks set to be construction. The sector, traditionally a stronghold in the country, had for a few years been hit hard by high costs of construction materials and equipment, the devaluation of the rial, and an overall economic slowdown. Up until 2015, the economy had been contracting, with the construction sector declining by 3.6% and 3.1% in 2012 and 2013, respectively, the World Bank reported in 2015. It also noted that demand for construction permits in the country fell by 3% on average in the same period, in large part due to reduced investment. The industry was not in the best of health; the Central Bank of Iran had similarly reported that 117,300 permits were issued in FY2014-2015, down from 172,600 permits the year before, reflecting a 32.1% fall, while 72.1 million sqm of total floor area of permits were issued in FY2014-2015 compared to 120.6 million sqm to year before, a 40.2% fall.

All this has now changed with the lifting of sanctions. After years of being cut off from foreign investment, the Iranian government is seeking to rapidly modernize the country’s outdated infrastructure in a bid to promote economic growth and increase its competitiveness, and companies around the world have shown great interest in the opportunity to participate in the country’s upcoming construction boom. Among other things, Tehran has set its sights on new railways, highways, energy projects, airports, water projects, ports, and retail facilities, and is looking for foreign companies to provide assistance—President Hassan Rouhani said in January that the country aims to attract at least USD30 billion in FDI over the next five years. With the added expectation of increased oil production and revenues, the Iranian construction industry is expected to see strong activity, with numerous market watchers and analysts making extremely bullish predictions for the sector. BMI Research in May revised its 2016 growth forecast for the sector upward from 3.2% to 4.5% in large part due to the foreseeable increase in construction activity as a result of the country’s opening, with others estimating the size of the local construction market reaching USD154.4 billion in 2016. Timetric, meanwhile, predicts the output value of the construction industry in Iran in real terms to grow at a compound annual growth rate (CAGR) of 6.34% from the 2016-2020 period, a marked increased from the 1.64% figure estimated for the 2011-2015 period. In addition to the slew of infrastructure projects expected to be initiated in the coming years, the optimistic growth predictions are also a direct result of anticipated growing confidence in the sector and the gradual return of private investment to the country amidst an improvement in Iran’s risk profile for investors. BMI further said in its report that Iran had moved up on its Project Risk Index from 18.8 out of 100 to 34 in a reflection of the reduced risk of the financing stage. An influx of foreign investment to finance projects will be particularly important in the coming period as the government struggles with reduced revenues from low oil prices over the last few years that will limit immediate public spending on infrastructure.

Top on the government’s agenda of infrastructure development is the construction of new roads across the country and widening existing roads and highways. Iran’s Minister of Transportation and Urban Development announced in August that 1,070km of highway and 121km of freeway were under construction across the country, while the government separately said in June 2016 that work to upgrade 13 roads totaling 3,093km of highways was currently under way. Italy’s highway agency ANAS in July signed a deal with Tehran to construct and manage a 1,200 km-long highway at a cost of EUR3.6 billion, a major deal involving a foreign company. The highway will link Imam Khomeini Port on the Gulf to Bazargah on the Turkish-Iranian border. Iran is extremely keen to capitalize on its strategic location in the region and obtain a substantial share of the anticipated trade from the revival of the ancient Silk Road route between East Asia and Europe. Its infrastructural plans also crucially include developing its ancient railway network, as part of which over 1,591km of new railroads are under construction. There are plans to develop the country’s rail network by 2025 and increase the total rail network from 15,000km in 2015 to 25,000km within a decade.

As a result of its burgeoning population and increasing urbanization, demand for housing in Iran has skyrocketed in recent years. Despite the construction of a large number of housing units, supply is relatively low in comparison to demand. The Ministry of Housing and Urban Development noted that 700,000 housing units are built annually while demand in fact totals 1.5 million units. With a larger inflow of overseas Iranians returning to the country and more international companies expected to move in, the real estate market looks set to see even greater demand. While there are signs that real estate activity is picking up, there are theories that the housing market needs greater incentives in order to grow further. In its latest housing report, the Central Bank of Iran noted there was a 27.6% annual increase in the number of property deals in Tehran in July, while 92,843 new residential construction permits were issued in the country in 4Q2015, reflecting a 34.6% QoQ increase.

The greatest demand in real estate can be seen in the middle- and lower-middle-income segments; over half of all apartments sold in the first quarter of the current Iranian year were in the IRR20-40 million per sqm range—average property prices in Tehran are around IRR42 million per sqm—and the market would pick up significantly if developers follow up on this growing trend and focus on the untapped middle to low-end housing market instead of continuing to focus only on luxury and commercial developments. In an attempt to pick up the slack in this area, the government has unveiled several initiatives to encourage more affordable residential development. The Ministry of Roads and Urban Development outlined a plan this year to revitalize older residential areas and encourage the construction of residential property in 2,700 neighborhoods in 495 cities with a total population of 19 million. The local construction sector has also taken to importing and applying new civil construction technologies to speed up the process of construction and reduce the costs of a project. Earlier governments had also initiated the Mehr project, a large-scale residential project to provide 2 million low-income people with homes, though the program subsequently suffered from a lack of funding. Adequate investment, in particular from overseas, will be necessary to ensure that similar subsequent initiatives will not suffer the same fate as the Mehr Project. Kambiz Salehi, the Managing Director of SEKAF Technical & Construction, told TBY the company was currently involved in building 1,750 small affordable apartments in Karaj as well as two 30-story towers and a 26-story building in Tehran. Acknowledging the large amount of investment needed to boost the real estate sector in the country, Salehi notes that one of the key factors that will determine the future development of Iran is the lack of funds that currently prevents projects from being implemented and that foreign investment will be key. Dr. Gholamreza Ansari, the Chairman of the Iran Housing Investment Company (Khanehsazi), meanwhile, told TBY Iran’s current capacity for and volume of building construction is higher than in previous years and that the company is focused on two types of projects in housing, namely luxury residences and projects to build between 1 and 5 million small houses for lower-income individuals. Khanehsazi is currently involved in projects to build 1,000 houses in Tabriz, 400 in Zanjan, and 195 in Chalus, in addition to several hospitals. Dr. Ansari acknowledges that in addition to foreign financing to construct large projects as well as upgrade and renovate its existing buildings, Iran also requires foreign materials and knowledge to bring the construction sector up to speed.

Another sector that looks set to see dramatic growth with the lifting of sanctions is retail. The EIU estimated that the local consumer goods market in 2016 was worth USD95 billion and is forecast to grow to USD166 billion by 2020. Traditionally dominated by local businesses, the retail market is seeing frenetic activity in terms of constructing modern retail establishments, with some estimates putting the number of malls currently under construction in the country at 400, 65 of them in Tehran. One such project, Isfahan City Center built, at a cost of USD1 billion, is currently the second largest mall in the region, spread out over 5 million sqft and encompassing an entertainment complex and a museum. A similarly prolific project in the city of Kerman in the southeast is set to be constructed. To be funded by the Sultanate of Oman, the shopping complex is estimated to cost up to USD120million and will spread over an area of 6ha. Khanehsazi’s Dr. Ansari mentioned in his interview with TBY that the firm had eight projects in the pipeline to construct malls in Tehran, most of them in the advanced planning stages, though financing again remains a key issue. The market is also expected to see more lucrative and prestigious projects such as high-rise offices, international hotel chains, and entertainment complexes, necessitating larger and more experienced firms that can handle more complex regulations and higher energy efficiency standards. The construction sector looks set for an extraordinary recovery with the expected increased transfer of technology and knowledge, greater access to financing, and exciting projects in the works.