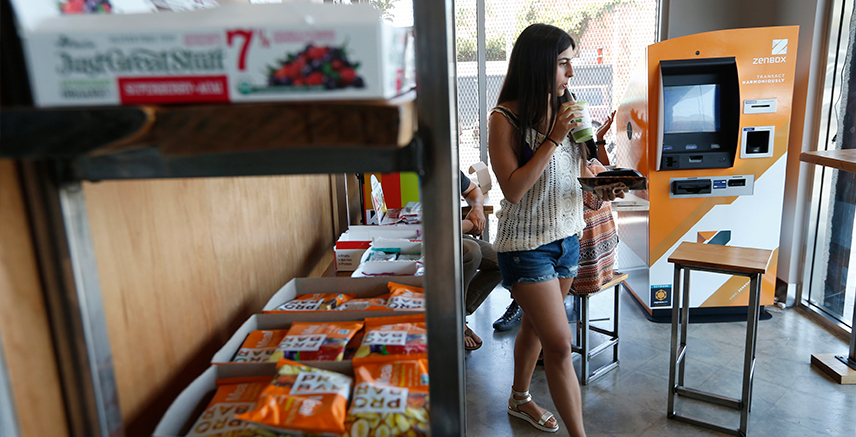 A woman walks past one of Southern California’s first two bitcoin-to-cash ATMs. The value of bitcoin dropped by 10% following China’s recent ban

There is no doubt that 2017 has been a big year for the emergence of digital currencies, blockchain technologies, and the vision of a cashless, decentralized financial future.

As expected though, with attention comes reaction, so attempts to control and regulate the technology has not come as a surprise.

The most recent came from the People’s Republic of China, which, over the past year, has had a conflicted approach to the world of cryptocurrencies.

Last week, the central government imposed an immediate ban on initial Coin offerings (ICOs) in China, demanding that any companies dealing with ICOs suspend these activities.

Those that have raised money through these new financial instruments will now be under pressure to refund investors.

This is no small undertaking.

Since the beginning of the year, China has become a haven for the development of this kind of technology, raising around USD400 million from an estimated global ICO capitalization of USD2.16 billion in the first half of 2017.

As a point of reference, by year-end 2016, the total value raised in ICOs worldwide, according to website Cryptocompare, was just USD160 million.

Blockchain technology, around which these ICOs are based, has been attracting many investors as the market rapidly expands.

The technology, made popular by Bitcoin—by far the digital currency with the biggest market capitalization—is a system of decentralized transaction confirmations.

Computers around the world solve mathematical equations that allow them to confirm transactions that are then inscribed in what can be described as a ledger, decentralized and unchangeable.

The ledger is formed by a chain of computer blocks that register the transactions, hence the name blockchain.

This has allowed for the creation of digital currencies, with no central controlling entity, and no need for banking institutions, regulators, or physical money. The currency is worth what investors are willing to believe it is worth, and is uninfluenced by monetary policy.

ICOs work mostly within this concept. A company working on developing a new technology will release a white paper to inform investors of their business goals and then try to raise capital through the emission of a token, which, unlike equity, is expected to increase in value due to the company’s performance but that can potentially be used as currency, rather than as a stock.

ICOs are attractive to start-ups today because of three factors: they have been attracting an enormous amount of investor attention, they are much quicker and easier to organize for investors, and governments largely have no control over them.

There have been 65 ICOs in China this year alone, with over 105,000 people investing in new tokens and digital currencies.

But the risk-averse Chinese government is, understandably, not very comfortable with this amount of unregulated capital moving around, and has decided to put an end to the trend, at least for the time being.
A statement by the Chinese government, signed by the People’s Bank of China, China Securities Regulatory Commission, China Banking Regulatory Commission, and China Insurance Regulatory Commission, among other regulating institutions, reiterated fears that ICOs could hide money-laundering activities and classified the instrument as an illegal fund raising activity. ICOINFO, China’s second biggest ICO exchange, and other smaller ICO companies, immediately suspended trading a portion of the ICO coins they work with.

Almost all cryptocurrencies crashed hard in the immediate aftermath of this decision, less than two weeks ago. Bitcoin and Ethereum lost over 10% of their value before rebounding slightly.

Chinese NEO lost over 30% of its value in a matter of hours.

This is not the first time the Chinese authorities have tried to impose added control on the cryptocurrency markets.

In January, the Chinese central bank announced it wanted to investigate money laundering activities and potential market manipulation, as the country’s crackdown on corruption hurt the Yen and saw many people try to acquire foreign currencies instead.

At the time, the government’s crackdown saw the price of Bitcoin collapse by 16% to around USD700.

The fact that Bitcoin has been trading over the USD4,000 mark for the better part of last month shows that the temporary impact of such state interference is unlikely to seriously damage an otherwise solidly growing market.

What is different about China’s relationship with this new technology, however, is that it seems to be driven equally by fear and fascination. After all, the Chinese hold, by far, the biggest bitcoin and Ethereum mining capacity in the world today, with one major company, BITMAIN, controlling around 27% of the global market through its two most popular mining pools.

On the state side, the Chinese central bank launched the Digital Currency Institute in late July, located in the very same building as the China Banknote Printing and Minting Corporation. Earlier it had been revealed that the bank was recruiting for positions related to prototype development within the blockchain spectrum with the aim of developing a state-backed digital currency.

Perhaps nowhere else has a powerful central state paid so much attention to this attempt at a financial revolution, a fact which could put China at an advantage in the face of inevitable change.