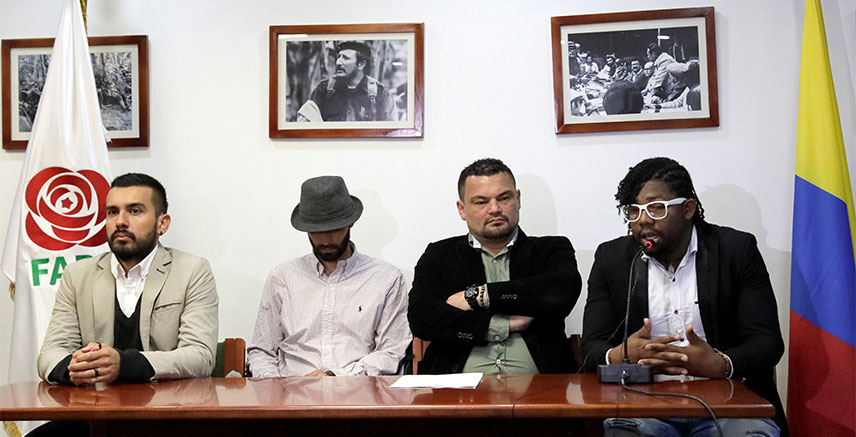 Share on:
Sunday’s election in Colombia will be a milestone in determining the future—or failure—of the country’s post-conflict 'Reconstruction.’

Unlike its American counterpart, Colombia’s 50-year conflict was never decided by force of arms alone.

Instead, a delicate, tedious, and often troublesome peace forged in the heat of many sultry Havana nights must now survive the onslaught of ambitious politicians eager to make a career out of its imperfections back home.

Willing to stoke the fires of popular dissatisfaction with what is, admittedly, an often merciful deal, conservative candidates across the political spectrum have risen up to slay the dragon of Santos’ peace deal with FARC and proclaim a new holy war against what they see as coca-fueled castrochavismo.

Chief among them is Sunday’s purported front-runner, Ivan Duque, a 41-year old lawyer with little political experience who’s thought to have 38% of voting intention.

Yet another protégé of former President Alvaro Uribe, President Santos’ mentor-turned-archrival, Duque was elected to the senate in 2014 and rose to national prominence in 2016 as one of the most vocal opponents of the peace referendum.

Leading the underdog ‘NO’ campaign to a notorious surprise victory in November 2016—a nonbinding vote politely jettisoned by Santos to salvage the Nobel’s timeless reputation—Duque’s star has only risen since.

In the country’s March 11 parliamentary elections—the first held since the peace deal went into effect—Duque won 3.9 million votes and over two-thirds of conservative primary votes to lead the conservative coalition into Sunday’s contest.

His right-wing Democratic Center party also finished strongest in the country, with 19 seats in the senate and 33 in the lower house.

Though no party garnered more than 16% of the total vote, between them the country’s three conservative parties (Democratic Center; Conservative Party; and Radical Change) tallied 50 of the senate’s 102 seats.

Meanwhile, the elephant in the room, the FARC, now rebranded as a civilian political party called the Common Alternative Revolutionary Force (thus keeping its acronym in Spanish), received barely 0.5% of the vote.

Yet, according to the terms of the peace, it still won (a minimum) five seats in the senate and another five in the lower house—a discrepancy that will only embitter conservatives when the FARC has poor showings and enflame them should they ever grow more successful.

Whatever the case, Duque and his uribista allies, as ideological confreres of former president Uribe are known, are not wasting any time.

If elected, he has promised to tear up large sections of the peace deal, starting with criminal impunity for aspiring-politician-former-guerillas, and moving second onto coca farmers, whose crops he would eradicate rather than gradually substitute.

Peace, at a discount

Though 70% of Colombians told a Gallup poll in April that peace was “on the wrong path,” the other four presidential candidates still stand by and large the agreement.

Of them, the candidate polling second with 27% of voting intention, Gustavo Petro, leader of the leftwing Colombia Humana coalition, one-time M-19 guerilla, and former mayor of Bogotá, is the sole to claim it didn’t go far enough.

Referred to as more “peasant-friendly than Havana” by leading progressive publication La Silla Vací­a, 57-year old Petro does not shy away from standard far-left fare such as land appropriation, one of the several reasons an evangelical minister in Barranquilla accused him of Satanism just last week.

Fully backing the peace process, he would do well in a second-round runoff, but is likely too centrist to make it that far.

In fourth is ex-vice president German Vargas Lleras, with 10%. A poor showing for the right-hand man of a Nobel peace prize-winning incumbent, Vargas Lleras has been in the tricky position of trying to have it both ways: at one moment violently denouncing the leniency of the deal so as not to lose the metaphysical uribista vote, at the next stolidly saying “he’ll see it through.”

As fifth-place Liberal Party contender Humberto de la Calle, a veteran public servant with roughly 3% of voting intention, put it: Vargas’ position on the peace resembles an old colonial era attitude toward governance: “to obey without fulfilling the law.”

Not that de la Calle has any intention of ignoring its finer mandates: as the government’s chief negotiator with the FARC, he has more skin in the game than any to see it through.

Thus the grand question for Colombia as it enters Sunday’s election: what kind of peace does it want? Otherwise, what kind of war?