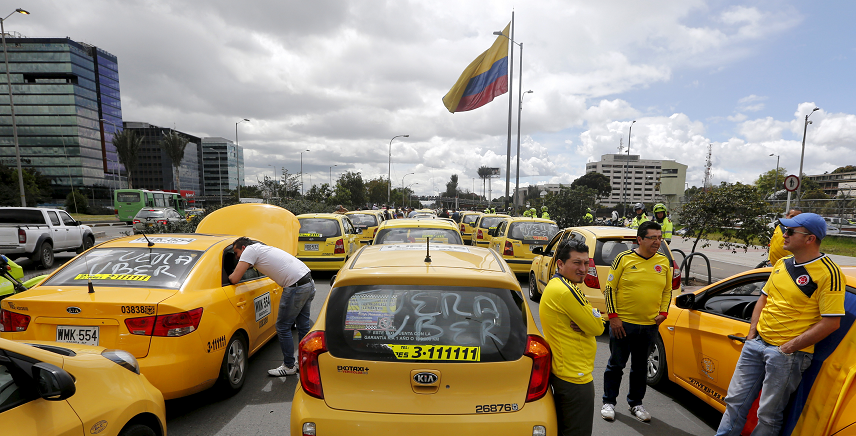 Share on:
Colombia was the first South American country to welcome Uber in, and has become the first country to kick Uber out. What happened and what is at stake in this stand-off?

“Goodbye Colombia. Unfortunately, Uber is no longer available in Colombia. Reach out to your representatives and ask them to find a solution.”

This was the message received by Colombians looking for an Uber service after 12:00am midnight on 1 February, 2020, along with a link to Tweet a message directed at the Ministries of Information Technology, the Ministry of Transportation, and the Presidential office saying “I wanted to order an Uber service, but was unable to.”

It all started in December, 2019, when the Superintendence of Industry and Commerce (SIC) ruled to suspend Uber’s license in Colombia citing “uncompetitive behavior” as the reason.

The ruling was the result of a lawsuit filed by the taxi union CoTaxi,”but represented an industry-wide initiative supported by all taxi unions and companies.

The question of whether Uber is a transportation company or a technology company is one that is continuously debated in many countries, and will have important regulatory implications.

In Colombia, the Ministry of Information Technology has always allowed Uber to operate as a software company and adhere to its regulations. By doing so, the company has been able to bypass specific fees imposed by the Ministry of Transportation to all commercial transportation entities in the country, giving it a regulatory loophole with which to minimize its fiscal responsibilities.

That competitive advantage, as labeled by the regulatory agencies and taxi companies, came to an end this past month.

Uber leaves the country after having operated for six years, working with over 88,000 Uber drivers around the country, having completed more than 300 million rides, and having paid over USD40 million in taxes.

Picking up the crumbs

Uber was the largest ride-sharing platform in the country, which means that its forced exit represents an opportunity for other businesses to take over that market share.

Several taxi unions have already offered over 40,000 new licenses to ex-Uber drivers around the country, but more significantly the remaining ride-sharing companies are competing to attract both drivers and consumers. Here are some of the applications currently operating in Colombia:

Sara LT: Went live in Colombia on 2 February, the day after Uber’s goodbye. This company is based in Argentina and is a platform for women drivers and clients only, citing safety concerns as their primary value proposition. There are already 6,000 drivers registered in two weeks.

InDriver: Arrived in Colombia in 2018 and operates in 13 cities including Bogotá, Cali, Medellí­n, Bucaramanga, and Cartagena. Its value proposition is that clients can propose and negotiate rates with the drivers via the app.

Picap: Started operations in 2017 and has drivers in 11 cities. Has over 100,000 drivers of cars and motorcycles working.

Cabify: A Spain-based company that acquired the Brazilian app “Easy Taxi” in 2018. It has operations in six cities, including Bogotá, Cali, Medellí­n, and Barranquilla, with over 50,000 drivers affiliated in addition to working with selected taxi companies.

DiDi: Operates in Bogotá, Cali, Barranquilla, Bucaramanga, and Medellí­n and has 100,000 drivers. A Chinese company.

Beat: Arrived in 2018 and operates in the same cities as DiDi. Has over 50,000 drivers and also works with several taxi lines including Cotech, Taxia, and others.

The Uber Eats App will continue to operate in Colombia and is not part of the judicial order.

In Davos, Switzerland, President Duque addressed the ongoing dispute by saying: “While some companies adhere to the corresponding fiscal responsibilities, others are competing without following the same regulations, and this is the case with the transportation industry…this is not about the technology or the platform, this is about fair competition.”

Uber has made it very clear that they are opposed to the decision on regulatory grounds. They have launched a substantial communications campaign, through both formal and informal, and public and private channels, and argue that the decision is substantially “arbitrary” in that it only targets Uber and does not affect the remaining ride-sharing platforms.

Furthermore, Uber is threatening to file a lawsuit against the Colombian government by citing a clear violation of specific technological-exchange clauses in the Free Trade Agreement that exists between the US and Colombia. The size and scope of this claim has yet to be confirmed, but the damages claimed are expected to be over USD250 million.

The decision has been labeled anti-competitive and hypocritical, but Uber, which claims that the government’s goal of promoting the Tech industry and developing a sustainable “Orange Economy” goes against this allegedly arbitrary stance against Uber.

The company has also communicated that it had plans to hire an additional 300 full-time employees in the next two years and was considering building a USD40 million manufacturing and service center in Colombia for R&D purposes. These plans have not yet been transferred to other South American countries.