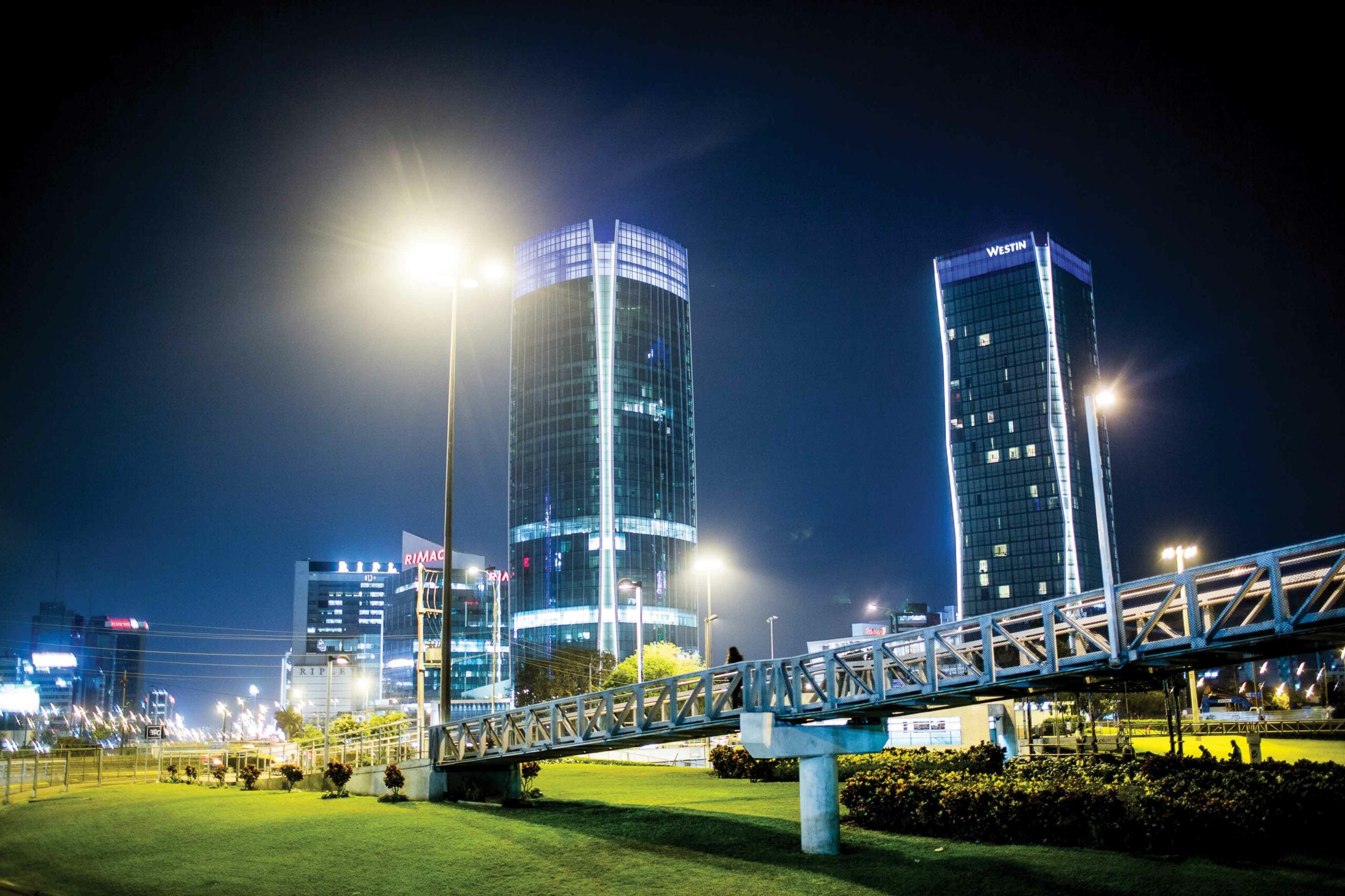 Share on:
Peru's financial sector has survived the economic woes of yesterday by sticking to its guns on tight fiscal policy.

Peru’s financial sector, in general, is a concentrated affair, and where the banks are concerned, just 17 vie for business in a nation where banking penetration remains below regional averages. Industry research reveals cumulative deposits in the system of 218 billion soles by mid 2013, while increased YoY by 12.5%, accounted for just one-third of GDP. The ratio for total loans was the same, on a total print of 212 billion soles, and matching that of Mexico. By comparison, Peru’s southern neighbor Chile’s loans-to-GDP ratio was at roughly 75%. Local giant Banco de Crédito del Perú (BCP) alone accounts for close to 35% of loans according to financial services watchdog, the SBS. And with Banco Continental, Scotiabank Perú and Interbank the top-four together account for over 80% of loans and deposits. Elsewhere, in banking’s financial cousin, the insurance sector two players sit on 60% of total premiums. This concentration dates back to Peru’s painful recovery from economic crisis in 1998, when the number of banks all but halved from 27 in 1997 to 15 by 2006. A perceived absence of M&A regulation has down the years left the giant banks a free hand to acquire smaller players, further concentrating the field, also curbing the arrival of foreign entrants. According to BNAmericas, a prime example of this was HSBC, which expanded its footprint to Peru in 2006, only to sell its local business—with a 1.6% share of loans and 1.8% stake in deposits—to Colombian group GNB.

CREDIT WHERE CREDIT’S DUE

On May 27th, 2014, Fitch Ratings completed an encouraging peer review of the four main Peruvian banks, whose business volumes stood at between $35 billion and $10.6 billion at YE13. The agency was encouraged by strong credit metrics and competitive positions, despite the concentrated environment. Welcomed, too, were the rises in retail and SME lending, confirming longer-term confidence among citizen and business alike. “Peruvian banks have been very active in local and international capital markets and have greatly improved their funding base with low-cost, medium-term funding,” the agency reported. And among its rating actions, Banco de Credito del Peru’s (BCP) Long-term foreign currency Issuer Default Rating (IDR) was upgraded to ‘A-‘ from ‘BBB+’ with a ‘Stable Outlook.’ Yet in December of 2014, the agency calculated that excepting Colombia, asset growth among, “…Andean banks is expected to decelerate in 2015 due in part to lower economic growth compared with the three-year period ending in 2013 and tighter credit conditions in some markets.”

Financial regulatory reforms are likely also to follow, and it appears that Peru’s economy and finance ministry (MEF) is pondering amendments to the supervision of banks and cooperatives. Investment banks today supervised by the financial services regulator (SBS) may find themselves under the scrutiny of the securities regulator (SMV).

CEO Walter Bayly told TBY that; “We have always been proud of our ratings, and of the fact that BCP has survived for over 145 years, despite the volatilities the country has undergone. This only reaffirms the importance of the bank in the broader economy.” Noting the bank’s conservative stance toward the quality of credit risks, “…but also in the level of capital decisions that we would like to work with, the level of liquidity we would like to handle, and the risks we take in general” he concluded that “…the continuous upgrade is a recognition of the way we manage the bank.”

Since the early 1990s, administrations have favored the tight fiscal policies and monetary policy that have turned Peru’s frown upside down. Dynamic economic growth has been fueled by increasing by mineral exports, while consumer spending, too, has reflected encouragingly in bank’s financial results. So much so that by 2013, regardless of a rather sluggish economy, total direct loans had grown by 14.8%, deposits by 18.4% and equity by 11.2%. Then in July of 2014, Moody’s Investors Service elevated Peru’s sovereign rating to A3 from Baa2, again, with a friendly nod to a healthy balance sheet and fiscal framework. And meanwhile, official data confirms that Peru’s middle class has soared from 26% of the population in 2005 to 50% today. According to Asbanc, Óscar Rivera, the head of Peru’s Banking Association the local banking sector is likely to experience loan growth of around 12 to 13% in should the economy expand by the expected 3.8 to 4%. BN Americas reported him predicting that economic recovery would be determined to an extent by the willingness of Peru’s regional governments to spend their budgets fully in 2015. This would entail the familiar large-scale infrastructure commitments that create work and foster a better transportation matrix; all good for the broader economy. Yet it cannot be overlooked that Peru, one of the strongest performing Latin America economies for some years, saw a steep dip in GDP growth to 2.4% in 2014 from a robust 5.8% in 2013.

Peru’s growth potential is clear, and has not been lost on foreign banks either; including Santander, Banco Falabella, Banco Azteca, Deutsche Bank, GNB Sudameris, Banco Ripley, Banco Cencosud and the Industrial and Commercial Bank of China (ICBC). Meanwhile, two banks from China, a European bank and another from Latin America have been scoping the landscape according to the banking association. Brazilian investment bank BTG Pactual, too, revealed plans earlier this year to launch a commercial bank in Peru.

Peru’s Central Bank (BCRP), keen to spur economic activity credit—the benchmark interest rate is at 3.25%—has put its money where its mouth is. In March 2015 the Bank reduced marginal reserve requirements for financial institutions from 8% to 7.5%. It also lowered its minimum requirement of current account deposits to be deposited at the Bank from 1% to 0.75%. With this move, the BCRP seeks to make available more local currency liquidity to further stimulate local economic activity. Indeed, since June 2013, the BCRP’s reduction in marginal reserve requirement in soles from 30% to the 7.5% has opened the floodgates to more than 13 billion soles of liquidity into the system. As Julio Velarde, Governor BCRP explained; “Since lower reserve requirements increase the amount of loanable funds for banks, the sequence of cuts implemented by the BCRP are helping the banks to expand loans in domestic currency. In addition, lower reserve requirements contribute to reduce the cost of credit too.” Importantly, too, the ratio of credit to GDP in Peru has sustained its growth, “…and in consequence, there has been a dramatic increase in financing access for consumers, financing for small firms, and so forth. He points out that sector research indicates that Peru boasts the world’s most sophisticated micro finance system. Indeed, “If grow accelerates, we may have to adopt a more restrictive monetary policy in order to guarantee low inflation.”

Banks are obliged to meet specific de-dollarization benchmarks, as mandated by the BCRP. Peru is one of the most dollarized economies in its region. With the recent depreciation of the sol, which lost 9% of its value in 2014, the authorities have been particularly attuned to the need to reduce the level of dollarization in the system. Specifically, they reduced their loan portfolios in dollars by 5% as of June 2015 (versus December 2013 balances) and will have done so by 10% by December 2015. This represents a $2 billion shift in their balances from dollar denominated loans to soles loans. The Central Bank hopes to reduce total dollarization of the system’s loan portfolio from 37% last year to 30% by the end of 2015.

According to the latest data, as of February, loan growth in soles was 17.6% from a year earlier, while in dollars, there was a 1.7% contraction over the past year. Overall credit growth is at 10% YoY, denoting the most tardy expansion observed since 2010. Regarding the housing market, there has been a clear move toward issuing mortgages in soles, again a welcome move for the would-be homeowner, given problematic currency depreciation. The average mortgage rate in soles as of February 2015 was at around 8.6%, vs. 7.5% in US dollars, according to banking regulator SBS. Mortgage issuance in soles was up 23% YoY, while in dollars, there was a 5% decline; making for an overall mortgage growth of 15%. Official data for February indicates that 34% of total mortgages were denominated in dollars, down notably from the 52% of 2011.

There has been an increase in non-performing mortgages, natural enough in a period of depreciating sol and retarded economic growth. Delinquent mortgages were at 1.5% of total mortgages outstanding, up from 0.8% in January 2013 and 1.1% in January 2014. Yet this remains acceptably low for an emerging market.

While relatively low, at 25% in 2014, Peru’s mobile penetration is set to rise, making for an alternative medium for the delivery of financial services. Peru’s finance minister, erstwhile economist Alonso Segura in April 2015 is determined to deliver banking into the mobile area. Indeed, in 2012 Peru’s congress had approved a bill that would underpin the nation’s mobile banking regulatory framework. Banking in Peru, and indeed the broader financial markets, will definitely be paying attention to alternative distribution modes in the years ahead.

The banking sector, then, is neatly nestled amid the Central Bank’s prudent fiscal policy. Credit remains healthy, and while highly concentrated, foreign players seem set to dilute the pond in the years ahead.