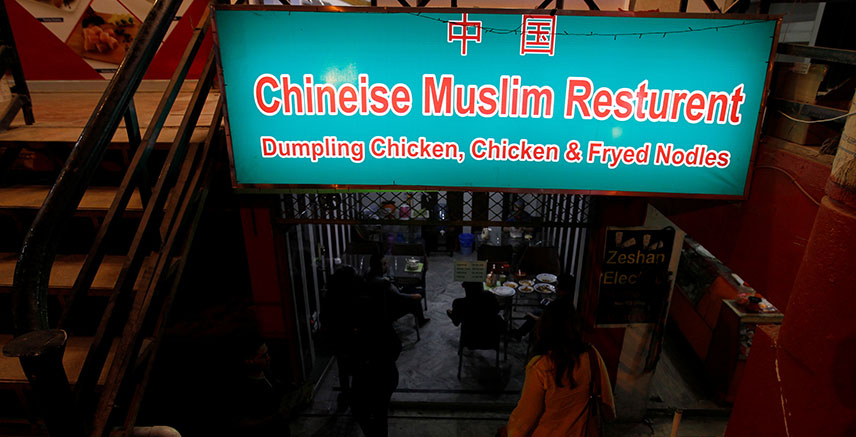 From Karakoram to the Indian Ocean

Share on:
Despite widespread criticism and concerns, the China-Pakistan Economic Corridor has started to reap rewards for Pakistan’s domestic infrastructure.

Customers walk down stairs to the Chinese Muslim restaurant run by Halima and Saleh, in Islamabad, Pakistan November 2, 2017. The couple had a catering business in Changji Hui Autonomous Prefecture of Xinjiang province in northwest China, but moved to Islamabad five months ago to open a restaurant to cater for the growing Chinese population working with CPEC projects in Pakistan. REUTERS/Caren Firouz

Ever since the details of China-Pakistan Economic Corridor (CPEC) leaked out, parallels have been drawn between CPEC and the East India Company, the precursor of British colonial rule in the Indian subcontinent.

The USD62 billion project has raised eyebrows and fear across Pakistan due to the level of influence China plans to exercise in Pakistan, which has been laid out in detail in the project’s 231-page Long Term Plan (LTP). For example, there is little clarity over which entity will control or supervise the extensive surveillance system being installed in an increasing number of Pakistani cities.

Then there is the concern highlighted by economists, both in Pakistan and abroad, about the country’s ability to repay USD90 billion in debt over the next 30 years. If Pakistan fails to repay, it could possibly meet the fate of Sri Lanka, a country that ended up ceding the strategically important Hambantota port to China in lieu of unpaid debts.

That has led experts and observers to warn other developing nations doing business with China under the One Belt One Road (OBOR) initiative of falling into similar financial crises.

According to a March 2018 report published by the Center for Global development, a US-based think tank, China’s excessive lending is posing a severe risk to the financial stability of a number of countries.

However, despite all the negativity surrounding China’s USD900 billion initiative, its flagship venture, CPEC, has provided Pakistan’s economy with a much-needed boost. According to Illango Patchamuthu, World Bank Country Director for Pakistan, “The upcoming China-Pakistan Economic Corridor project is a positive example, where trade facilitation and the development of local economic activities are explicitly integrated in the design of the project.”

On May 26, 2018, Pakistan’s Prime Minister Shahid Khaqan Abbasi inaugurated a section of the 392km long Sukkur-Multan Motorway, the largest transportation project under CPEC that has employed more than 22,000 Pakistanis, mostly from nearby villages with previously high unemployment rates.

Earlier, on May 16, 2018, Pakistan’s first mass rapid transit train system made a test run in Lahore, Pakistan’s second most populous city. The Orange Line Metro Train (OLMT) is part of CPEC’s Lahore Metro project that is expected to transport around one million of Lahore’s 11 million inhabitants.

In terms of fixing Pakistan’s well-documented energy woes, the CPEC energy portfolio—17 projects valued at USD20 billion— has achieved major successes. Several electric projects have been completed ahead of schedule. Despite requiring complicated logistics, the Sahiwal coal power project began commercial operations almost one year in advance. According to The Economist, “floodlights were hung from canes so construction could continue through the night.”

Similarly, two 660MW units of Port Qasim coal power project have come online several months ahead of schedule. In terms of renewable energy, three wind power projects and a majority of the 1,000MW Quaid-e-Azam solar power park have been completed ahead of time, at a cost of over USD1 billion.

The influx of Chinese workers and tourists, combined with Pakistan’s flawed security has pushed the Pakistani government to bolster security across the country, much to the relief of an average Pakistani. CPEC has had such a profound effect on Pakistan’s economy and overall image that Moody’s Investors Service has reaffirmed Pakistan’s credit profile as B3 stable, an impressive feat for a country that has been marred by the war on terror in Afghanistan.

The success of CPEC projects in 2018 has shifted some opinions about the project; a report published by the Asian Development Bank, the UK’s Department for International Development, the Japan International Cooperation Agency, and the World Bank says that CPEC offers unprecedented potential for Pakistan to boost its economy, reduce poverty, and spread benefits more equally across its provinces and territories—the flagship venture has even successfully lured Balochi separatist groups to drop arms and join CPEC’s path for the salvation of Balochistan, Pakistan’s largest province in terms of area, and one which has been systematically neglected throughout the country’s history.

With CPEC already in action, only time will tell if an increasing Chinese footprint in Pakistan is China’s attempt at 21st century colonialism, or simply a vote of confidence in Pakistan’s future.