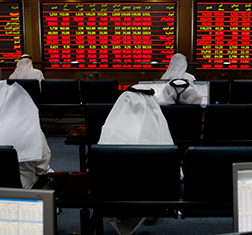 Credit Where Credit’s Due

Share on:
Kuwait's well-disciplined and liquid banking system can only benefit from a gradually diversifying economy fueled by prospective state infrastructure commitments.

It may be the 26th anniversary of the first Gulf War that liberated Kuwait from a neighboring aggressor, yet regional conflict, geopolitics, and commodity fluctuations continue to rain shrapnel on the economy. Traditional overdependence on hydrocarbons, which the government is successfully working to reverse, has meant 90% of product export earnings, 80% of the budget revenue, and 45% of GDP derive from oil. Added to this is a public sector so dominant that even private sector and non-oil activity performance is often dependent upon subsidized loans and input prices. As a result, the scope of investment opportunities has tended to be concentrated in real estate, trade, and the capital markets. Arising from this is the essentially concentrated nature of the sector per se, where the leading five banks claim over 80% of total assets, and the biggest two, National Bank of Kuwait (NBK) and KFH, hold around 60% alone. Yet Kuwait’s hugely liquid banking system ranks among the most sophisticated among its GCC peers, and bragged a credit penetration rate of 72% by 2013, in contrast to the GCC benchmark of around 59%. This all speaks of considerable growth potential.

Meanwhile, at the sharia end of the financial equation, EY’s report World Islamic Banking Competitiveness Report 2016 indicates that the upward trajectory of participation banking is headed toward market dominance. By 2014, the combined profitability of the leading 20 participation banks had risen USD1 billion to just over USD7 billion on a 2010-2014 CAGR of 14%. Among these hard-hitters, four were Kuwaiti institutions, and sharia-compliant penetration had reached 45.2% in 2014. Of note, given the components rise, on December 22, 2016 the Central Bank of Kuwait (CBK) published new governance rules aimed at strengthening internal and external oversight. These stipulated external sharia audits for greater transparency and accountability, making the sharia universe more appealing to would-be customers.

Bank lending has been geared at consumer loans, real estate, construction and trade finance, while the industrial sector has languished at times. Meanwhile, the scope of lending has long been constrained by the huge scale of the expatriate population, whose access to bank credit has been curbed by restrictions on real estate and commercial ownership. Regardless, the latest numbers indicate healthy credit demand, while on a broader scale the country is on the cusp of one of the region’s largest reform drives to curb state expenditure and foster private sector initiative. The banking sector will play a pivotal role in the process. This was confirmed in a TBY interview by Sheikh Mohammed Al-Jarrah Al-Sabah. He is the Chairman of Kuwait International Bank (KIB), recently named the Best Islamic Bank in the GCC. “The challenging economic climate,” he explained, “actually seems to have encouraged governments across the GCC to undertake fiscal reforms and actively pursue income diversification, with many forging ahead with wide-scale national development schemes.” As he rightly pointed out, “this inevitably creates countless opportunities for banks across the region and I would also say that the shifting global economic paradigms are opening the door for Arab banks, particularly Islamic banks, to assume a greater role on a global level.”

The local banking sector remains strictly regulated. To ensure effective supervision and oversight, the CBK was among the first central banks to implement such Basel standards as the Capital Adequacy Ratio (CAR) Standard, Financial Leverage Ratio (FLR) Standard, and Liquidity Coverage Ratio (LCR) Standard over 2014 and 2015. Perhaps, then, it is small wonder that in January 2017 The Banker magazine named Kuwaiti Finance Minister and Deputy Prime Minister Anas Al-Saleh Finance Minister of the Year 2017 for the entire Middle East. The award applauded state moves to re-price goods and services and the introduction of VAT to balance public finances and drive toward economic diversity, among other state commitments.

In late September of 2016 Moody’s determined the outlook for Kuwait’s banking system for the coming 18 months as ‘stable,’ confident of sustained government infrastructural spending within the latest five-year plan, of which more later, plus stronger loss-absorbing buffers that allowed increased market despite low oil prices. The agency forecast 7% credit growth for 2016. It also gave the thumbs-up to stronger capital levels as evidenced in a Basel III Tier-1 ratio of 15.3% at YE2015 and improved general provisions at 3.8% of gross loans as of YE2015, making the modest new problem loans anticipated over the outlook period manageable. In terms of downside risk to asset quality, Moody’s noted the banking system’s heavy credit concentration on real estate and equity markets, as we have already seen. The former sector alone accounted for 24% of banks’ total loan books as of March 2016. NPLs at around 3-4% of gross loans are foreseen for 2016-17, thus up from 3.3% for rated banks as at YE2015. Regarding profitability, the system’s net income to average assets ratio of just over 1.1% is likely to persist during the outlook period. Margins are expected to remain generally stable since longer-term government issuances would continue to fund Kuwait’s fiscal deficit, with higher available yields on lending counterbalancing the higher cost of funds. Significantly, too, regional tightening in liquidity would be mitigated at Kuwait’s banks, which will primarily be deposit funded, with sufficient liquidity buffers in evidence. Ultimately, too, Kuwait’s massive sovereign wealth fund, estimated at USD600 billion at end-June 2016, remains a vital source of capital in times of need.

As the world entered the new year amid almost theatrical global and regional uncertainty, the IMF concluded its 2016 Article IV Consultation with Kuwait. And like Moody’s, it found the financial sector sound “and credit conditions favorable.” As of June 2016, banks’ high capitalization with a capital adequacy ratio of 17.9%, strong profitability on a return on assets ratio of 1%, low NPLs on a ratio of 2.4%, and high loan-loss provisioning of 206% coverage were duly noted. It, too, reiterated, the need to diversify the economy, thus bolstering financial sector resilience and growth potential. The IMF also suggested that “a formal framework for operationalizing macro-prudential measures, reforms to facilitate debt recovery, developing a liquidity forecasting framework, and strengthening the crisis management framework, including by introducing a special resolution regime for banks and a deposit insurance mechanism, would help further enhance financial sector resilience and ensure orderly resolution of banks in the event of stress.”

Market data indicates around USD30 billion of infrastructure projects were allocated in 2016 to galvanize broader economic performance, marking a national record. NBK, a major financial institution, has been a cornerstone in the financing of Kuwait’s such projects. State enterprises, then, rank among those whose borrowing is on the rise. Notably, Kuwait National Petroleum Co. has sought a USD10 billion credit line to upgrade two refineries. This state sector activity itself will underpin the estimated 1.9% economic growth of 2017, doubling that of 2016. Elham Yousry Mahfouz is the CEO of Commercial Bank of Kuwait, which boasts a capital volume of around USD620 billion. The bank finances infrastructure projects such as hospitals, schools, and refineries across Asia. In the context of Kuwait, however, he told TBY that, “There are 10 local banks, five Islamic and five conventional, and we have regional and foreign banks with us as well. And yet, the majority of investments for these [infrastructure] projects comes from local Kuwaiti banks, or banks from across the GCC with a presence here.” When participating in these projects, “the facilities offered are mostly non-cash bonds, like issue guarantees [which] is not cash per se, yet if projects have big volumes, there is a good lump sum figure through fees and commissions.”

The Lay of the Land

Given Kuwait’swork toward economic diversification, any credit momentum among its SMEs is a welcome barometric measure of activity. For financial year 201572016 the share of SME lending actually fell modestly to 5.3% of the total. Yet the CBK has sought to raise this level by incentivized banks through a preferential risk weight of 75% for SME finance. Significantly, too, in March 2013 parliament had passed a new law establishing the Kuwait National Fund for SME Development. This foresaw credit facilities of up to KWD500,000 to SMEs with a fund/banks split of 80:20. In deposits, aggregate deposit growth fell noticeably in 2015/2016 to 3%, whereby overall deposits as at December 2015 printed at KWD49.27 billion. Domestic deposits constituted 76.8% of the consolidated banking system total. Among this, resident private sector deposits at local banks had climbed 4.2% YoY to KWD34,950 million at end-FY2015/16.

Kuwait’s banking sector is sufficiently liquid to withstand prevailing economic headwinds. And while it is has also been cushioned against adversity by a behemoth sovereign wealth fund, economic transition towards greater private enterprise, and infrastructural commitments will keep the cogs turning smoothly.