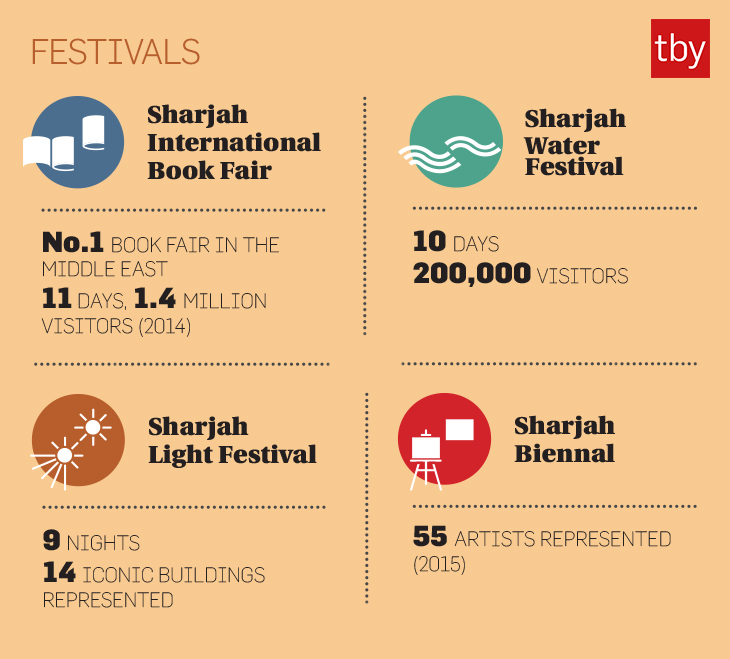 Crowned with the title of Islamic Culture Capital of 2014 and designated as UNESCO’s Cultural Capital of the Arab World, Sharjah has decidedly made an impact on the global and regional cultural landscape over the past decades. The Emirate, which boasts a variety of over 20 museums, has a cultural calendar that is packed with an abundance of festivals throughout the year.

The Sharjah International Book Fair, which is the Middle East’s largest book fair and the fourth largest book fair in the world, represents an annual highlight in this calendar. The first edition was held in 1982 with the primary aim of promoting reading among the youth and stimulating literature in the region. Since then, the fair has grown into an 11-day literary event that hosted 1.4 million visitors in 2014 and witnessed the participation of 1,256 publishers from 59 different countries

An arguably less intellectual, but equally entertaining festival is the Sharjah Light Festival, which transforms Sharjah during nine nights into a mega-sized light show, where a combination of lights and music display innovative three-dimensional designs on fourteen of Sharjah’s most iconic buildings, “highlighting the architectural splendor of Sharjah,” explains HE Khalid Jasim Al Midfa, Director-General of Sharjah Commerce and Tourism Development Authority, who is quick to claim that Sharjah also has a very interesting arts scene, which culminates in the Sharjah Biennial.

Since 1993, Sharjah’s Biennial has celebrated the Emirate’s flourishing arts scene and has served as a bridge between artists and art institutions and organizations in the Arab world. At the same time, it has contributed greatly to putting art from the region on an international pedestal. For 2015’s edition, some of the 55 artists spent months in Sharjah to complete their masterpieces on unusual, off-site plots. Thus, Egyptian artist Hassan Khan decorated Sharjah’s Flying Saucer building with color-based banners, Adrián Villar Rojas built his Planetarium in a derelict ice factory in Kalba on the East coast of Sharjah, and Michael Joo’s Locale Inscribed, which featured crevices leading to a reflective silver nitrate—coated wall, was set in an abandoned Sharjah warehouse.

The annual Sharjah Water Festival is probably better equipped to cater to the masses than the Biennial, as it features entertainment shows and water sports such as kite surfing, jet skiing, and flyboarding. The festival, which receives 200,000 visitors during 10 days, reaches its climax with the Sharjah Grand Prix for powerboats, which is part of the U.I.M. Formula One H20 World Powerboat Championship. The festival also celebrates local traditions and cultural heritage, and aims to raise awareness for water conservation.

In addition to these festivals, a number of smaller festivals are held throughout the year. The Sharjah Food Festival treats citizens to a range of cuisines, cooking competitions, and food-related entertainment, whereas the Sharjah Heritage Days celebrate the history, culture, and traditions of the region, and Sharjah Children’s Reading Festival aims to stimulate literacy amongst Sharjah’s youngest generations.

In contrast to its perhaps flashier and more Western neighbors Dubai and Abu Dhabi, Sharjah has retained most of its cultural roots and heritage, and through hosting this variety of cultural festivals, HH Sheikh Dr. Sultan bin Muhammad Al Qasimi the Ruler of Sharjah hopes to educate his people and instill his love for arts in them. This approach typifies the Emirate, which is not willing to sacrifice its history on its path to progress. Rather, it has found a way to unite the two and hand in hand embark on a path of economic and cultural growth.