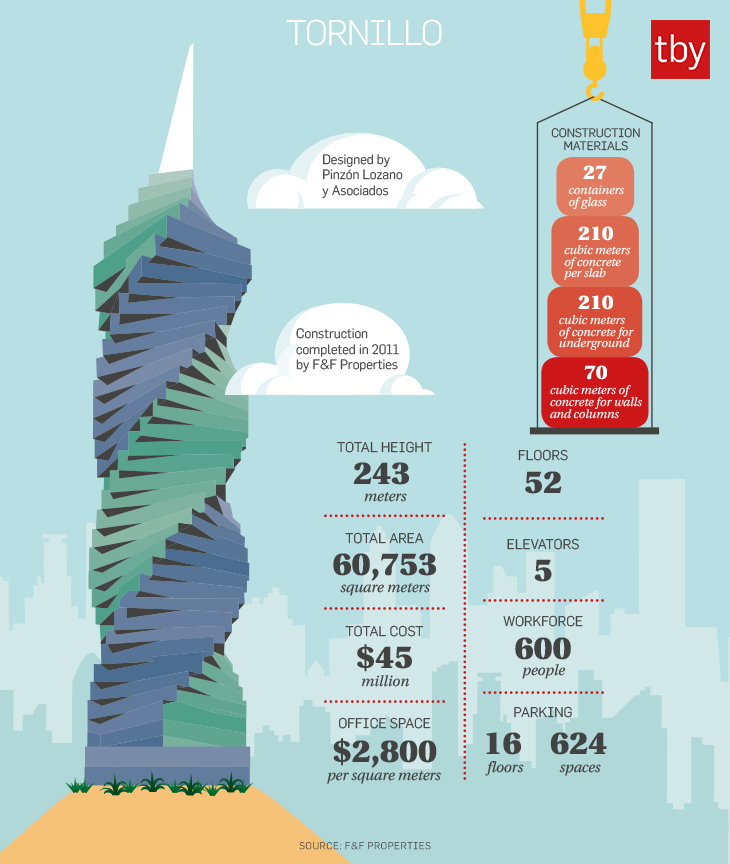 Share on:
The asymmetric design of the glass and reinforced concrete F&F tower in Panama City is an innovative approach to construction in Latin America.

One of the first iconic buildings to appeared in Panama was the Cathedral of Nuestra Señora de la Asunción. This erection rose between 1619 and 1626, reaching 27 meters and fast becoming an iconic piece of New World architecture. Between the construction of the cathedral and the new modern buildings that today are shaping the skyline of the city, Panama has hosted some of the most interesting architectural experiments in the region.

The first “modern” skyscraper of the city was “El Castillo de Greyskull,” built between 1917 and 1921 by Leonardo Meyer. With a height of 4 floors, the “skyscraper” is still visible in Plaza Herrera. Traces of modernism appeared in the local architecture thanks to the hotel industry, Hotel El Panama, inaugurated in the 1950s, and the Panama Hilton, introduced international features to Panamanian architecture. In the 1970s the XI Juegos Deportivos Centroamericanos (Central American Games) amplified international trends in the local architecture used for the construction of the main facilities built for the event.
Thanks to the booming real estate and construction sectors, Panama toady has one of the most distinctive skylines in Latin America. The F&F tower (Revolution Tower), also known as “Tornillo”, (the screw in Spanish) is one of the most iconic buildings in Panama City. Located on Calle 50, in the heart of Panama City’s bustling financial district, its 47 floors spiral 243 meters into the air, and are visible throughout the city. This iconic tower was designed by the well known Pinzón Lozano y Asociados studio, and was developed and completed in 2011 by F&F Properties. The project set a milestone for the construction sector not only in Panama, but in Latin America as well.

One of the latest design trends emerging among the leading international architecture firms is a form that twists its way upward. The Turning Torso in Malmo, the Infinity tower in Dubai, the new Shanghai Tower and the Kuwait Trade Center are good examples of this trend. The design of Tornillo rotates around a central axis, turning 360 degrees as it ascends, giving it the appearance of a helix. Despite its remarkable shape, el Tornillo is not the highest building in the city as it has been ranked as the 7th highest skyscraper of the capital.
The green glass and concrete building was selected by the German Emporis, as one of the 10 best skyscrapers in the world in 2011.

During a conversation focused on the current development of the architectural and construction sector in Panama, Natasha Sucre Benjamin, President of the well known company Inversiones Natasha, commented that, “a celebrated architect in Panama has said that we grow vertically because our capital doesn’t have enough infrastructure to spread outward, which is why everything is concentrated in one area in the middle of town.” Panama city is extremely narrow and the areas surrounding the canal are unsuitable for development. Moreover, doing so would have a terrible environmental impact on the surrounding jungle and natural water supply for the Panama Canal and peoples in the near city. Apparently, the “vertical growth” that characterizes buildings in Panama is not just a fashion or an international trend, it’s a real obligation.