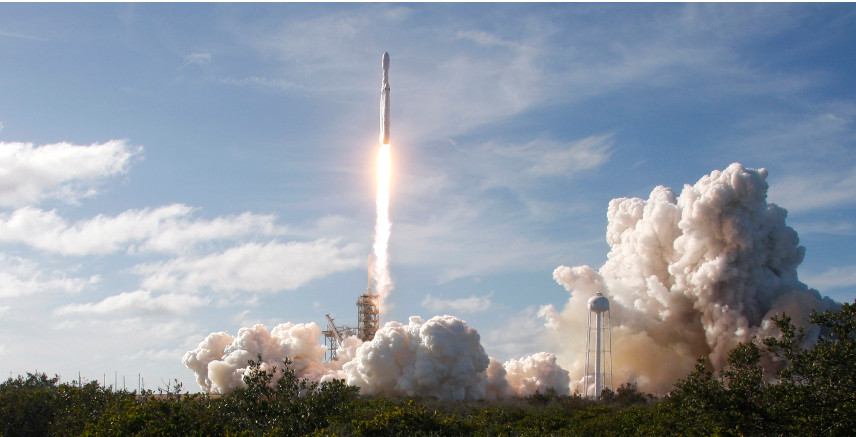 Share on:
Elon Musk's SpaceX just launched the most powerful rocket on the planet, Falcon Heavy, from Cape Canaveral.

A SpaceX Falcon Heavy rocket lifts off from historic launch pad 39-A at the Kennedy Space Center in Cape Canaveral, Florida, US, February 6, 2018. REUTERS/Thom Baur

Space enthusiasts are a difficult breed to pin down: do they represent the most noble aspects of humanity’s quest for infinity and exploration, or a pesky drain on dearly needed public resources? Or both?

Though finances are fungible, thanks to Elon Musk the above is now a moot question: with this week’s launch of SpaceX’s Falcon Heavy, for the first time in human history the private sector has designed and built the world’s most powerful rocket.

Leaving earth three hours late in front of hundreds of thousands of spectators from the Kennedy Space Center in Cape Canaveral, Florida, Falcon Heavy carried with it a special memento for life on other planets: Elon Musk’s very own cherry-red electric Tesla Roadster, fully equipped with a dummy astronaut in the driver’s seat and “Don’t panic!” written across the dashboard.

On its own course in the general direction of Mars, the Roadster’s radio is set to David Bowie’s “Life on Mars” on loop: if it doesn’t crash into its designated planet, it is slated to drift 400 million kilometers from Earth over the course of a billion years.

Its launch is pivotal in more ways than one. Firstly, as a triumph for SpaceX: the last time the groundbreaking and monumentally ambitious firm tried to launch in September 2016, a fireball destroyed its Falcon 9 during a routine refueling procedure just two days before launch.

Second, as a coup for commercial spaceflight companies. When United Launch Alliance, a partnership between Lockheed, Boeing, and the US government, finally got its Delta IV Heavy off the ground in 2004, the world’s third-highest capacity rocket cost the taxpayer USD435 million.

By recycling rockets (i.e. re-using boosters) with SpaceX’s bespoke technology, not only can Falcon Heavy keep the cost of heavy launches closer to USD90 million—it also carries twice the payload capacity of Delta IV.
As Musk told reporters on Tuesday, this means it’s “game over” for traditional launchers.

Though hardly the end of government dominance over the space industry—Washington, Moscow, and Beijing still have a monopoly over putting humans into orbit—Tuesday was nonetheless a turning point for an industry the private sector has toyed with for decades without ever significantly altering.

Beginning with France’s Arianespace in 1980, a venture now mostly joint-owned by Airbus and Safran, the private sector race to space has been a long time coming.

Bolstered by Jeff Bezos’ Blue Origin, established in 2000 with the goal of putting humans in outer space by 2018, and Richard Branson’s Virgin Galactic (est. 2004), SpaceX is now competing with Arianespace for the low-earth orbit market for launching satellites.

As Musk basks in the glory of Falcon Heavy, Arianespace is reporting record orders for 2018—some 14 launches scheduled for this year alone. This comes on top of 11 orders worth USD1.31 billion in 2017.

Though none of these firms have been able to convincingly demonstrate even the short or medium-term profitability of space exploration, private sector investors in the space industry do not seem to mind. In 2016 alone, space-related startups received USD2.8 billion in investment—just over half the entire budget of the National Cancer Institute, the US’ leading research center on the disease that killed 600,000 Americans that same year.

While this is dwarfed by the USD19.5 billion in government support allocated to NASA in 2016, 0.5% of the federal government’s budget, it’s still USD400 million more than space-related start-ups got the year before.
35 years after Reagan’s ‘space wars’ against Yuri Andropov and the Soviet Union, the future race to the heavens is as likely to be fought between the global public and private sectors as it is between rival state powers.

But on which grounds? If prestige and ideology fueled the US and Soviet race to outer space, what will drive its 21st century equivalent?