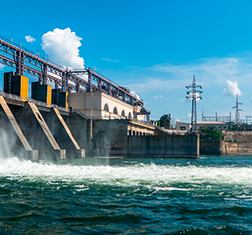 Share on:
Colombia’s energy landscape is set to change dramatically as it sets out plans to diversify its generation sources. In terms of extraction, production is on the rise following a drop […]

Colombia’s energy landscape is set to change dramatically as it sets out plans to diversify its generation sources. In terms of extraction, production is on the rise following a drop in output as oil prices fell.

Colombia currently has more than 15.7GW of installed generation capacity and generates nearly 53TWh every year. The country’s National Interconnected System (SIN) provides energy services to around 96% of the country, while the Non-Interconnected Zones (ZNI) serve the remaining 4%. According to the government, Colombia exported approximately 457GWh of electricity abroad in 2015, and the main export markets are Venezuela, which receives approximately 85% of exports, and Ecuador, which accounts for the remaining 15%. Per capita electricity usage was approximately 1,123kWh in 2015, representing a rise of nearly 100kWh over the previous five years. Total consumption sits at around 49.39 billion kWh. The majority, roughly 70%, of Colombian electricity is produced via hydroelectric plants, while 12% is derived from natural gas and 7% from coal. The government has, however, unveiled initiatives designed to expand the role of renewables in the country’s energy portfolio and progress is being made in that direction.

Following sweeping market reforms in 1994, private industry and government entities have been able to work together to provide electricity to Colombian citizens, and service reliability has improved dramatically. After a further round of regulatory reform in 2003, energy production expanded even further, helping position Colombia as a key electricity producer in the region.

According to the MaRS Advanced Energy Center, half of Colombia’s electricity production is privately owned, and Endesa SA, Gas Natural Fenosa, and Empresas Publicas de Medellin (EPM) are the three largest operators in industry, together controlling almost 65% of the market. By the close of 2017, the Colombia electricity market is expected to reach 59TWh, accounting for a CAGR of 3.9% over the previous five years. The residential sector accounted for the largest share of the electricity industry’s revenue, accounting for 41.7% of the marketplace’s value, roughly USD2.7 billion, while the industrial sector accounted for around 30%, or USD2 billion, according to the most recently available statistics. Between 2012 and 2017, the market grew by a CAGR of 6.8%.
Though the electricity market has been growing, many Colombians still face frequent shortages and interruptions. According to data from the World Bank, Colombian consumers have an average of 18.6 electricity interruptions per year lasting, in total, 17.7 hours. These interruptions erase roughly 1.8% of the market’s overall value. Regulatory improvements have, however, served to improve these figures somewhat, and technological advances promise to alleviate the issue even further by allowing firms to optimize their operations. In an exclusive interview with TBY, Federico Echavarrí­a, General Manager of AES Chivor, described his company’s investments in new technology and the impact these outlays will have on reliability. “We are trying to develop energy storage, as we believe this will provide an interesting solution to many of the transmission constraints we have in certain parts of Colombia, like the Caribbean coast,” said Echavarrí­a. By focusing on cutting-edge storage technology, firms like AES hope to make interruptions and poor reliability a thing of the past.

Sector restructuring in 2003 and 2012 has improved business conditions in the oil sector, and a number of steps have been taken to attract international investment. In 2014, the oil sector received USD4.8 billion in FDI, representing around 30% of the country’s total FDI. In an exclusive interview with TBY, Eduardo Rodriguez Tamayo, Country Chairman of Colombia, Ecuador, Central America & Caribbean for Shell, described the steps the government has been taking to attract foreign firms. “The storyline is quite positive in the sense that the government has taken the right measures to incentivize investment,” said Tamayo. “These measures include contractual modifications, offshore free trade zones, and contract flexibility. This is precisely what companies are looking for.”

Though Colombia’s oil industry witnessed impressive growth over the last 10 years, the last few years of declining oil prices have hit the industry hard. According to BP’s 2016 Statistical Review of World Energy, Colombia has roughly 2.3 billion barrels of proven oil reserves, representing a decline by around 700 million barrels in the last 10 years. Additionally, Colombia produced nearly 1 million barrels of oil per day in 2015, representing an increase in 1.7% over the previous year. Consumption also increased between 2014 and 2015, jumping 5.6% from 314,00bpd to 331,000bpd. Refinery capacity jumped an astounding 25%, moving from 336,000bpd to 421,000bpd. Refinery throughput, however, dropped, dipping 1.3% from 230,000bpd to 227,000bpd. In 2015, the major export market for Colombian oil was the US, which received 370,000bpd.
There are seven key oil pipelines in Colombia. The two longest pipelines are the Ocensa and Cano Limon pipelines, which stretch 832km and 776km, respectively, and are capable of transporting 590,000 and 220,000bpd, respectively. The Alto Magdalena pipeline has a capacity of 9,200bpd while the Colombia Oil pipeline has a capacity of 15,000bpd. The Llanos Orientales pipeline has a capacity of 340,000bpd while the Trasandino pipeline, which stretches for 304km, is capable of transporting 85,000bpd. The USD4.2 billion Oleoducto Bicentenario pipeline project has completed its first phase and is currently capable of transporting 110,000bpd. The country has five major refining facilities, though the majority of Colombia’s capacity is represented by the Barrancabermeja-Santander facility (205,000bpd) and the Cartagena refinery (80,000bpd). However, expansion projects are set to expand capacity at both plants to 300,000 and 165,000bpd, respectively.
The majority of the country’s oil production takes place in the foothills of the Andes and the eastern Amazonian jungles, according to the US Energy Information Administration, though the centrally located Meta Department contains the country’s largest producer, the Rubiales oilfield. As global oil prices continue to recover, Colombia’s oil sector is expected to bounce back. In an exclusive interview with TBY, Marco Antonio Toledo, President Director of Petrobras Colombia, explained his vision for the coming year, noting that he expects to see a slight rise in prices. “The onshore segment in Colombia should react well to these numbers. Colombia should be able to ramp up by 3-5%,” said Toledo. As conditions improve across the market, Toledo foresees renewed strength in the sector. “Early success will motivate all the corporations take a step forward and will promote a better environment for operational collaboration. This, in turn, will reduce costs and create a lower cost environment.” As companies seek to further optimize existing infrastructure, government incentives will remain an important part of stimulating growth in the sector.

At the end of 2015, Colombia had 136 billion cbm of proven natural gas reserves, the majority of which is located in the Llanos basin. Based on the most recently available data from the Colombian Energy Ministry, Colombia’s natural gas production exceeds its consumption by roughly 368 million cbm (11.7 million cbm produced versus 11.3 million consumed). Three companies dominate the natural gas production market in Colombia: Ecopetrol, Equion Energia, and Chevron. As a result of rising domestic demand in a number of areas, the government has been pushing hard to expand production. Currently, there are nearly 4,960km of natural gas pipelines in the country, and the three major lines are the Ballena-Barrancabermeja line, the Barrancabermeja-Nevia-Bogotá line, and the Mariquita-Cali line. The long-term prospects of the sector were given a boost in mid-2017 as Ecopetrol and Anadarko made the largest discovery in 28 years, a development that could allow the country to be energy self-sufficient for decades.

Colombia is a major source of coal for the global market, and in 2015 it was the fifth-largest exporter in the world and the largest in South America. According to BP’s 2016 Statistical Review of World Energy, Colombia had more than 6.7 billion tons of proven coal reserves, and it produced more than 55 million tons of coal, as measured in tons of oil equivalent, while it consumed only 7 million tons. Coal production is undertaken by private enterprise in Colombia, and the largest producer is the Carbones del Cerrejon (Cerrejon) consortium. The majority of Colombia’s coal exports are destined for Europe, South America, and the US, and Colombian coal alone represented almost 80% of American coal imports.

In recent years, Colombia has begun putting more effort into expanding its renewable energy sector. In 2010, Colombia inaugurated a new vision for its renewable energy production, setting a goal of achieving 6.5% on-grid and 30% off-grid non-hydro renewable power consumption by the year 2020. In 2015, the country achieved a 5% clean energy power generation rate nationwide. Additionally, the country has biofuel blending regulations that call for the blending of 10% ethanol with conventional gas and 10% biodiesel with diesel. The government has also agreed to cut greenhouse gas emissions by 20% by 2030.

The government has unveiled a series of incentive programs aimed at boosting energy production in renewable areas, including income tax and import duty exemptions, accelerated asset depreciation, and VAT exemptions, among others. With hydro-electricity accounting for more than two-thirds of the country’s electrical production, Colombia has dedicated an impressive amount of resources to sustainable energy production practices and technologies. In the coming years, the country hopes to expand its wind and solar capabilities, building out these technologies to help increase the overall reliability of the nation’s energy production system.