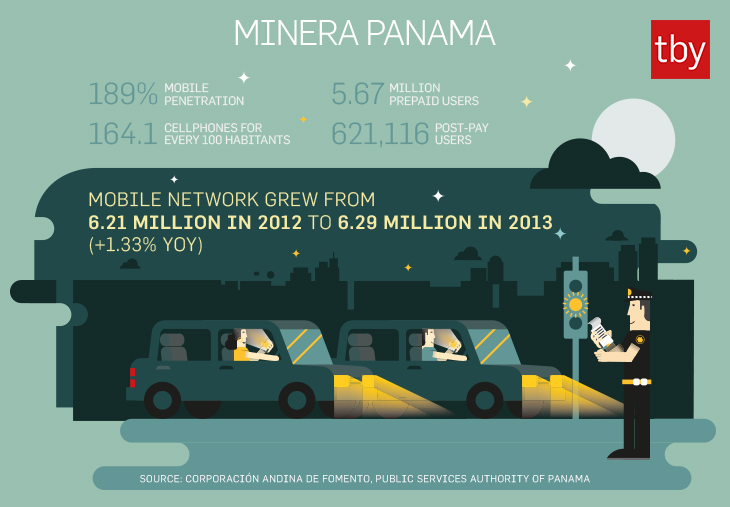 Share on:
Panamanians are addicted to their mobile devices, and in addition to one of the highest penetration rates in the world, however they would do well to put them aside when driving or engaging in other dangerous activities.

According to a report published by CAF (Corporación Andina de Fomento) in 2014, has nearly twice the mobile penetration as it does inhabitants. The country is characterized by a mobile penetration of 189.5%, the highest percentage in all the countries analyzed (Uruguay, Argentina, Chile, Brasil, Perú, Ecuador, Jamaica, Colombia, Venezuela, Paraguay, Costa Rica, Bolivia, Dominican Republic and Mexico). Meanwhile in comparison to more developed countries, Panama surpassed the likes of Spain (109.6%) and Denmark (148.6%).

“Latin America is an area of the world in which mobile phones were welcomed from the beginning. Phones were used for making calls; however, it has now changed so that the key component of phones is not voice but data, marking a significant transformation. People want mobile and high quality internet access” explained José Antonio Rios, President of Celistics. As latecomers to the technology game, Panamanians have leapfrogged older technology, adapting quickly to the faster and cheaper devices. Mr. Rios added that, “this has really moved forward in Latin America, and the penetration in the majority of these countries is over 100%. Between 2014 and 2016, normal phones will practically disappear. In Latin America you can get a smartphone for $80-$90, and this has come in parallel with an increase in purchasing power. In Latin America, there is more competition than in the US in the cellphone category.”

With a population that reaches nearly 4 million, shaping demand is one of the main targets of operators in the Panamanian market. The recent arrival of two new mobile operators in 2009 created additional competition in the market and generated price reductions that have significantly affected the market.

Other sources and data underline the massive usage of mobile devices among the Panamanian population. According to research released by Observatorio de Salud de la Universidad de Panama, the university attending demographic within the country have one or more mobile devices: 71% of the analyzed segment is made up of women, and 87% have Android operating systems. Here again, the trend is for smarter and cheaper alternatives, with a much lower representation of Ios.

The majority of the analyzed segment spends between $10 and $20 per month for voice and data. According to Autoridad de Tránsito y Transporte Terrestre (ATTT), in 2014, Panamanian drivers were slapped with 13,699 penalties for illegal use of a mobile phone, or for interacting with other units that have visual displays while driving. Between January and July 2015 the Panamanian police have levied 7,481 fines.