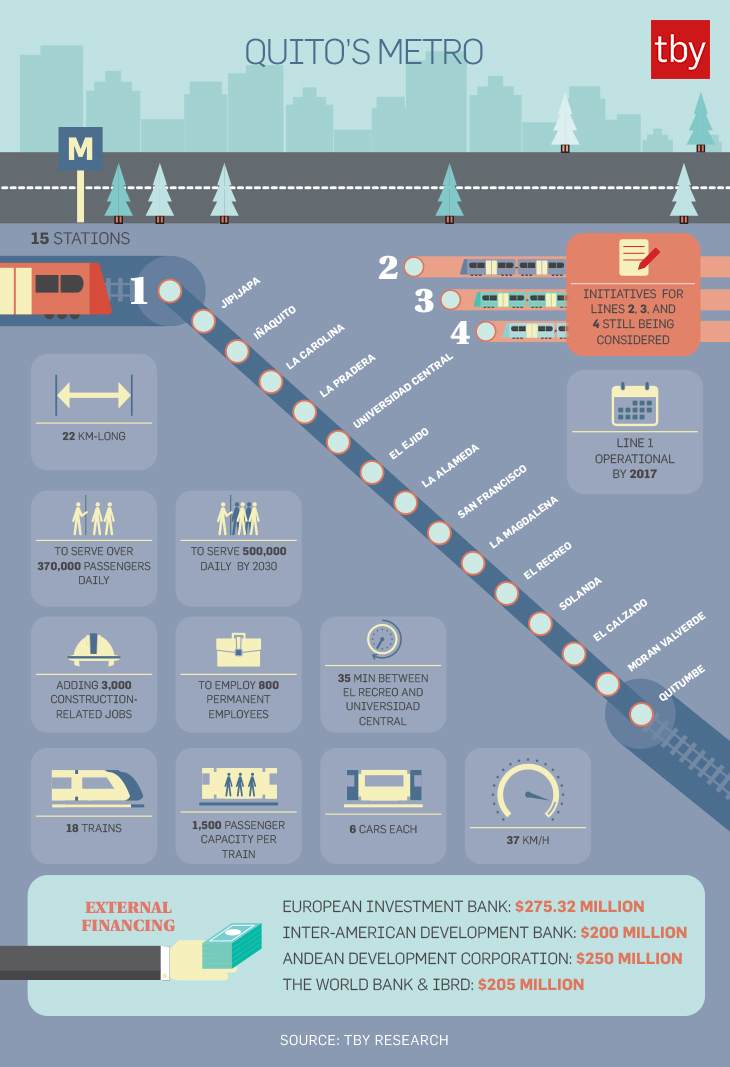 Share on:
Construction of Line 1 of Quito's Metro, or Metro de Quito, is well underway in Ecuador's capital.

At an initial cost of $1.68 billion, the Quito Metro represents one of the biggest infrastructural projects in the country’s history and is part of a wider $2.4 billion transport development scheme. The 22 km-long stretch of Line 1, which will run from Quitumbe bus terminal in the south of the city to Mursical Sucre International Airport in the north, is set to become operational by 2017, four years after works began in early 2013.

With a population nearing 2.7 million (according to the 2014 census), Quito has experienced massive population growth since the turn of the millennium. Nonetheless, a weak and unsophisticated public transport system has meant that the capital—which accounts for approximately 30% of national GDP—has largely depended on busses and trolley busses for mobility. With no rail-based transit system, the Quito Metropolitan Government devised the plan in 2009 and created the Metro Quito Specialized Unit which, with technical support from Metro de Madrid, has overseen the project.

When completed, the metro will serve over 370,000 Quiteños daily, while this figure is supposed to exceed half a million commuters by 2030. Moreover, Line 1 of the project will have 15 stations—including the commercial center El Recreo and the Central University of Ecuador (Universidad Central)—while the total journey time between each end is expected to be just under 35 minutes. Plans to build Line 2, 3 and 4 have also been suggested by the city’s authorities, although these initiatives are still being considered.

In terms of financing, the Metropolitan District of Quito has put up around $900 million for the project, while securing the remaining resources from a combination of international funds. Namely, the EU’s European Investment Bank (EIB) has pledged ‚¬200 million ($275.32 million), while the Inter-American Development Bank (IDB) and the Andean Development Corporation—or Corporación Andina de Fomento (CAF)—have invested $200 million and $250 million respectively. The World Bank, in co-operation with the International Bank for Reconstruction and Development (IBRD), has provided $205 million for the project. As such, the deal represents a growing trend of international investment arms that are targeting infrastructure projects in Ecuador, including a more recent investment of ‚¬100 million by the EIB for urban development, which was signed in December 2014.

Regionally, Quito will join Lima and Santiago as capitals in the South American Pacific area to have constructed a metro. Colombia’s capital, Bogotá, while proposing a $7.5 billion, 27 km metro line which is projected to be built by 2021, has struggled to get past the planning stage. Nonetheless, in an apparent breakthrough city authorities announced in May 2015 that the bidding process for construction is set to commence at the end of the year, which will be followed by personnel recruitment. Furthermore, Metro de Quito will be the first metro line to be built in Ecuador, despite the capital being second in size; after Guayaquil—the country’s economic and port hub.

Construction of the project has been divided in two phases. Phase one included building two new stations at La Magdalena and El Labrador, while linking Line 1 to the Carapungo-Jipalpa Express and has been undertaken by Madrid-based Acciona Infrastructures for a sum of ‚¬75 million. Meanwhile, a Spanish consortium composed of PROINTEC and KV Consultants Engineering, Project and Construction has headed phase two of the development, which includes tunneling, laying the track and building the remaining stations. The project has opened up 3,000 construction-related jobs while the metro, when completed, will employ 800 permanent staff.