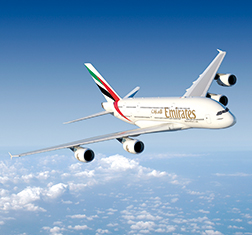 Share on:
Recent developments in the aviation industry mean that Dubai is well placed to benefit from increased passenger numbers—and an already well-established and international sector is about to accelerate its growth even more. Despite regional instabilities and the stubbornly low price of oil, the industry shows no sign of losing its pep.

Dubai’s transport, logistics, and storage sector is one of the key drivers of the economy, accounting for 14.8% of the Emirate’s GDP in 2015, a 4% growth on 2014, and remains the Emirate’s second biggest sector. Yet the transportation sector’s importance stretches far further than this figure suggests, underpinning as it does much of the wider economy and projecting the image of Dubai far and wide. Dubai, in 2016, stands in good stead to realize its ever-more-ambitious goals for the sector. Dubai is home to the world’s biggest and busiest airport, the fastest growing logistics industry of any city (the Emirate is already one of the top-five shipping destinations in the world), and is a regional pioneer for eco-friendly public transport schemes. But in 2016 it is Dubai’s aviation industry that hogs the headlines, and its flag-carrier airline, Emirates, is aggressively expanding into new services, new destinations, and driving a marketing push to promote brand Dubai still further.

In 2014, Dubai International overtook London’s Heathrow to become the world’s busiest airport. Passenger numbers increased 6.1% to 70.47 million in 2015. Dubai Airports manages the airports themselves and promotes them internationally. Air travel and transport in Dubai is dominated by the tri-terminal Dubai International Airport (DXB)—the busiest in the world by passenger numbers, and the sixth busiest for cargo. The airport’s importance is hard to overstate. Apart from the impressive statistics (its Terminal 3 is also the largest single building in the world by floor area, at 1.7 million sqm), the airport directly employs 95,000 people, and has created over 400,000 jobs internationally. In June 2015, Dubai Airports announced the complete renovation and refurbishment of Terminal 1, and a major $7.8 billion expansion of Terminal 2 by 2020.

Yet never content to stay still, DXB is soon to be joined by Al Maktoum International Airport, which is due to be fully operational in 2027 (although it began handling select flights in 2008, and in 2015 processed around 150,000). Although modest in its beginnings, Al Maktoum International Airport represents the future for Dubai’s aviation industry. With DXB already running at capacity (74 million passengers in 2015, most of them in transit), the Emirate’s ambitious plans for growth hinge almost entirely on the gargantuan new airport currently being constructed near to the Jebel Ali Free Zone and port. Once open fully to business, Al Maktoum International will be the largest airport in the world by all measures: passengers (capacity of 260 million), cargo (expected 12 million tons per year), surface area (140sqkm), runways (six), and expenditure ($82 billion). Originally penciled to open in 2017, the knock-on effect of the 2008 financial crisis has pushed the schedule back by 10 years. Terminal One will be exclusively used by Emirates, which will cease to fly from Dubai International. The airport will be able to handle 100 Airbus A380s at any one time. The new airport forms part of a massive new airport zone 40km south of Dubai, Dubai World Central (DWC), a major new development for business, with residential properties, parks, and retail centers.

Dubai Airports’ slogan is “Connecting the world,” and Emirates alone does a good job of that, accounting for 59% of all flights landing in Dubai. The airline has played a central role in Dubai’s expansion, reputation, and international brand since its establishment in Dubai in 1985. The national airline has a fleet of 251 craft and operates 1,990 passenger flights a week out of Dubai, flying to 101 destinations across six continents. Emirates has the largest number of A380 super-jets of any airline. With the coming relocation to Al Maktoum International Airport, the airline plans to double its size. The company currently employs a staff of 56,000 and had revenues of $24 billion in 2015. The airline has an ambitious goal to carry 70 million passengers (currently the total number of international travelers to Dubai) by 2020.

More than 60% of all the Middle East’s imports pass through Dubai, and the logistics sub-sector shows no sign of abating. Al Maktoum International Airport’s proximity to Jebel Ali is highly strategic—logistics and storage form a key part of Dubai’s future growth, and Jebel Ali is already the world’s third-busiest logistics and shipping hubs. Jebel Ali itself is at the heart of Dubai’s logistics industry that has, alongside the port’s expansion, witnessed unprecedented growth since 2005. The opening of DWC next-door provides ideal conditions for the sector to further increase its activity. A master plan, launched in 2001 in 15 stages, ensures Jebel Ali’s near-continuous expansion through to 2030.

Since 2014, Dubai has been home to the world’s only integrated logistics free zone. Dubai Logistics City (DLC) will ultimately process 12 million tons of cargo each year once its current program of expansion is complete in 2020. Registered as an industrial free zone, DLC is located within what will become DWC, in close proximity to the all-important Jebel Ali Port.

Dubai was designed with the car in mind, and by 2020 the city will have 5.3 million of them on its roads. Car ownership is already one of the world’s highest, at 541 per 1,000 (higher than New York City). The Roads and Transport Authority (RTA) oversees the highways sector on behalf of the Ministry of Transport. The RTA is preparing in 2016 to invest $12 billion in 500km of new roads by 2020. The new highways will be better designed, with 120 multi-level traffic interchanges and built-in flyovers to reduce junctions and congestion. It is hoped the new road interchanges will reduce the number of road accidents in Dubai, the number of which are currently one of the highest in the region: 166 people died on Dubai’s roads in 2015, although overall in the UAE road accidents are now falling by 7% YoY.

Dubai Metro, the first for the Arab world outside Cairo, is being gradually extended and further integrated as part of a big investment in public transport across the Emirate. The metro system began operating in 2009, and the initial two lines (Red, running alongside the trunk Sheikh Zayed Road, and Green) are due to be joined to three more (Gold, Purple, and Blue), and the original lines both extended. In 2015 the network carried 141 million passengers, an average of 390,000 journeys a day. The Green Line is to be extended by 12 stations (24km) and the Red Line by 15½km, bringing the Metro to the border with Abu Dhabi. By 2025, the network will extend to 221km, with 69 stations across the city. The system is modern, comfortable, and efficient: trains are automated and driverless—and is one of the cheapest networks in the world for passengers.