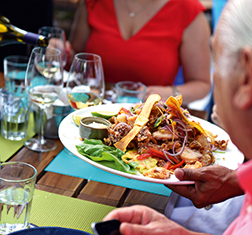 Share on:
Peruvian cuisine is seeing a major influx in popularity—and is jumpstarting the tourism industry in the process—as the country looks to attract visitors to more than its ancient ruins.

Peru’s tourism industry has worked for decades to promote the country’s image internationally as the top destination for those travelers looking to see the heights of pre-Colombian civilization in South America. For most, travel to Peru conjures up images of historical Andean ruins like Machu Picchu, or of the traditional indigenous communities living on the shores of Lake Titicaca. While these attractions are indeed lucrative for the country, one downside has traditionally been that most travellers spend little, if any, time in Lima. Considering that it has few points of historical interest in its modest historical center in comparison to the rest of the country, the capital city has invested time and money the last few years as it looks to make a name for itself.

It appears to be working. Over the past decade, Peru has experienced what the Economist recently called a “gastronomic revolution”. Capitalizing on the country’s diverse ethnic heritage and geographical variety, chefs, entrepreneurs, and restaurateurs have turned Lima into one of the world’s top gastronomic destinations, while simultaneously exporting Peruvian cuisine around the world. According to the Economist, some 75,000 people now visit Lima annually just to experience its cuisine, spending an average of $1,250 per person. More generally, restaurants have become an important source of growth in the economy, making up around 3% of GDP and growing at a rate of over 5% in 2014, according to the Instituto Nacional de Estadí­stica e Informática (INEI).

One of the biggest promoters of Peruvian cuisine has been Gastón Acurio, a chef, restauranteur, and TV presenter who famously refused to follow in the footsteps of his politician father and instead went to Paris to study cooking at Le Cordon Bleu. He returned to Peru and has since become one of the key developers of Novoandina cuisine. Acurio now has 44 restaurants in 12 countries and his company, Acurio Restaurants, recently began working with Abraaj Capital in order to accelerate its expansion in London, Dubai, and other major global cities.

In the coming years, the rise of Peruvian food looks set to continue. The American Culinary Association named 2014 the Year of Peruvian Cuisine, and according to many of the schools, institutes, and universities interviewed by TBY, many Peruvian students now view gastronomy as a viable and lucrative career path. Lima has responded in kind, as there has been a marked increase in the number of culinary schools in the city, topping out at 52. Many tertiary education institutions have also begun offering courses and even degree programs in restaurant management, cooking, and gastronomy, ensuring that this trend is more than just a flash in the pan.