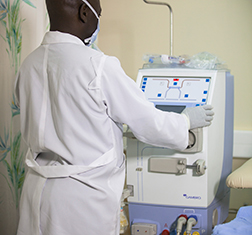 Share on:
The healthcare system is plagued by poor access, especially in rural areas, the effects of brain drain, and the high prevalence diseases such as HIV/AIDS and malaria. It has, however, had some success at tackling challenges head on.

Although the principle of universal healthcare exists in Zambia, on the ground, the reality is an inadequate state system backed up by a number of private hospitals in the larger cities that serve expatriates and more affluent Zambians. Up to 50% of the rural population has no access to healthcare at all, while at overcrowded government hospitals—the population of Zambia is growing quickly and currently stands at 14.54 million—those without serious injuries are often turned away from emergency rooms. Higher pay in the private sector means doctors often abandon the public system, or leave the country altogether, stretching resources further in a country that has borne the brunt of the global AIDS pandemic. Even private healthcare facilities are not without problems, and long-term illnesses often require treatment abroad. But for all its challenges, the authorities have had some success in taking the fight to diseases like HIV and Malaria, with its work combating the latter having been hailed as a real success story. Indeed, ownership of insecticide-treated nets (ITNs), a crucial weapon in the fight against the disease, now stands at over 70% thanks to initiatives to subsidize their purchase. But with such an undeveloped healthcare system overall, observers are calling into question the global health community’s method of targeting specific diseases instead of allocating resources to support more fundamental developments in the health matrices of the most vulnerable countries. As such, any shift in this area could be significant for Zambia, which sources half of its health budget from foreign donors.

The World Health Organization (WHO) recently published a health statistics fact sheet on Zambia, with a number of metrics standing out. Key is life expectancy, which has risen from 47 for females and 40 for males in 1990 to 58 for females and 55 for males in 2012, bringing the average to 57. This compares poorly to 81.5 years in the UK, but better than its neighbor South Africa, where it is 56. Other figures that point to an overall improvement in health standards include a significant drop in maternal mortality, which fell from 580 per 100,000 live births in 1990 to 280 in 2013, with the infant mortality rate also falling, from 115 per 1,000 live births in 1990 to just 56 in 2013.

Further into the WHO report, it becomes clear that communicable diseases are by far the biggest killer, compared with a developed nation like the UK, where heart disease takes the morbid prize. Other research, published in The Lancet, also suggests that 41% of all deaths in Zambia in 2014 were caused by AIDS/HIV, malaria, and pneumonia, with malaria being particularly deadly for children, and the top cause of child mortality in 2013

Other significant figures include total health expenditure as a percentage of GDP, which grew from 5.6% in 1995 to 6.5% in 2012, according to the latest data available from the WHO. Zambia has also adopted WHO guidelines on vaccinations for children, and, according to recent figures, 68% of children aged 12-23 months are fully immunized.

Zambia is engaged in a long and difficult struggle with AIDS/HIV. The first case was diagnosed in 1984, and today 1.1 million people in the country are living with HIV. The prevalence rate, according to UNAIDS, stands at 12.4% in adults aged between 15 and 49, and the number of adults above 15 living with HIV is 1 million, including 540,000 women. That means 100,000 children below 15 have HIV, while 380,000 children between 0 and 17 have been orphaned by the disease. AIDS killed 19,000 people in 2014. And curiously, HIV in Zambia has affected not just the poor, but also the wealthier and better educated, and is most prevalent in Lusaka and Central Province. The rapid rise of the disease has been tackled from very early on by the authorities, with consistent information campaigns informing the public how best to avoid the disease, and even, controversially, some churches endorsing the use of male contraceptives. More recently, the Institute of Human Virology (IHV) at the University of Maryland’s School of Medicine received a $50 million, five-year grant from the President’s Emergency Plan for AIDS Relief (PEPFAR) to support the “Stop Mother and Child HIV Transmission” campaign in the country. PEPFAR was established by former US President George W. Bush.

But while the country continues to receive significant aid from the HIV programs of richer countries, there is still a long way to go in the fight. Currently, Zambia ranks 10th in HIV rates globally, but managed to encourage a decrease, according to UNAIDS, of 50% in the infection rate between 2001 and 2012. The death rate also dropped by 50% between 2001 and 2011, suggesting that the country is on the right path.

Zambia has been lauded for the progress it has made in the fight against malaria, with key increases in ITN usage, as well as IPTp2 (intermittent preventive therapy in pregnancy, two doses) and other measures. The disease is still the biggest killer of children under five, however, and affects 4 million Zambians annually, according to UNICEF. It also accounts for approximately 30% of outpatient visits and kills over 8,000 people a year. Alongside children, pregnant women are also vulnerable. A total of 20% of maternal mortality is attributable to the disease, as well as 35-50% of under-five mortality, higher in more rural areas. This highlights the importance of IPTp2, the prevalence of which has grown in recent years, hitting 72% in 2012, while more than three-quarters of households used ITNs.

The struggle to reduce the impact of malaria is framed by the National Malaria Strategic Program for 2011-2016, which is also reliant on foreign support. The President’s Malaria Initiative (PMI), which is a part of US President Obama’s Global Health Initiative (GHI), has so far donated $151 million. The National Malaria Control Program (NMCP), working with USAID and the Centers for Disease Control and Prevention (CDC), distributed 7 million ITNs in 2014, including 1.6 million from PMI

For all the success Zambia has achieved in fighting malaria, however, the state of the healthcare sector in general remains poor. A study carried out by the University of Washington’s Institute for Health Metrics and Evaluation and published in BMC Medicine suggests that disease-specific programs, which, according to the study, take up the lion’s share of international health funding, may have undermined the quality of more routine care.

Back in 2009-2010, Zambia was rocked by allegations that foreign donor aid was being misappropriated. Among the nations that suspended their aid programs were Canada, which froze its $14.5 million aid program, as well as Sweden and the Netherlands. In total, over $275 million in aid was postponed or canceled. In May 2015, however, came good news. Recently, Sweden unfroze its donor program, unlocking $47.3 million that, according to the authorities in Zambia, is to be used to upgrade two health centers to first level hospitals, as well as to complete 650 health posts around the country. But while this is indeed good news, going forward Zambia is looking to shed its reliance on foreign financing, not least because when funds were originally frozen in 2010, the country was in the middle of a five-year spending program the withdrawal of funding for which severely affected the delivery of healthcare services. Indeed, Zambia is signed up to the Abuja Declaration, through which nations target the allocation of 15% of their national budgets to the relevant ministry of health. In 2015, the government allocated 9.3% of its budget to healthcare, and is touting the introduction of a social health insurance scheme as one way to boost the health budget up to the golden target of 15%.

The government has recently instructed the newly created Zambia Medicines Regulatory Authority (ZAMRA) to focus on developing an environment that will allow a domestic pharmaceuticals industry to thrive, while also taking on counterfeit drugs. Any development on this front would make a big difference, in a country where pharmacies are often under stocked. Discussing the issue, The Hon. Joseph Kasonde, Minister of Health, had this to say: “It is difficult to ensure availability of drugs when you are dependent on sourcing them from abroad. There is a need for some production to be realized in Zambia, although manufacturing in terms of laboratory synthesis is not a realistic proposition for Zambia today.” He went on to tell TBY that, “we should work with those who are interested in manufacturing and guide them in areas where they might have a maximum impact by producing locally.”

Speaking of the healthcare sector at large, The Hon. Kasonde also outlined his targets for the future, suggesting that the main objective is “universal health coverage,” for which “we firstly need to raise the quality of care in general.” Following this, the target is to “expand geographically to cover as much of the territory of the country as possible.” The Ministry is also committed to the elimination method, and is targeting the elimination of AIDS/HIV and malaria. Then, in pharmaceutical terms, the plan, according to the Minister, is to not accept “any shortage of drugs identified as being essential.”

Summing up, the blight of malaria and AIDS/HIV, as well as other communicable diseases, is a huge drain on resources that could otherwise be pumped into improving the general state of the healthcare sector. Some indicators are positive, however, and suggest that things are on the improve. The foreign aid from Sweden will go a long way to ensuring that Zambia gets the funding it needs to help people live longer, healthier lives.

In recent years, Zambia has made great strides toward improving their healthcare sector, especially in regards to combatting and preventing communicable diseases such as Malaria and AIDS/HIV. Thus far, their efforts appear to be paying off, as recent figures show that HIV transmission rates between mother and child have decreased dramatically. The government is also allocating more funds for pharmaceutical supplies, with roughly $11.17 million funneled toward development and distribution, more than triple what has been spent over the last four years. In spite of this progress, Zambian Minister of Health The Hon. Joseph Kasonde recognizes that there is still much work to be done, adding that the government, while pleased with the current progress, needs to do more to improve the quality of the services it provides. In an interview with TBY, The Hon. Kasonde outlined the Ministry’s priorities. “Our main objective is universal health coverage. We firstly need to raise the quality of care in general. After this, we need to expand geographically to cover as much of the territory of the country as possible.” In its effort to improve healthcare access, the health ministry has earmarked $50 million for its ambitious project to build 650 health posts throughout the country, emphasizing the importance of both rural and urban communities. The Hon. Kasonde predicts a completion date of April 2016.The project’s primary goal is to enhance the overall accessibility of vital health care facilities to average Zambians; currently, one can expect to travel between 40 and 80km to reach the nearest health post, a daunting trip if one is gravely ill. The government estimates that upon completion of the new health posts, travel distances will be drastically reduced to roughly 5km.The government is also anticipating the challenges that may arise as a result of the new clinics, such as meeting basic staffing needs for the new health posts. The Hon. Kasonde explains that the Ministry intends to address this issue by hiring and training additional personnel. The Health Ministry is also looking to bolster the availability of health delivery services with the implementation of various mobile technologies.