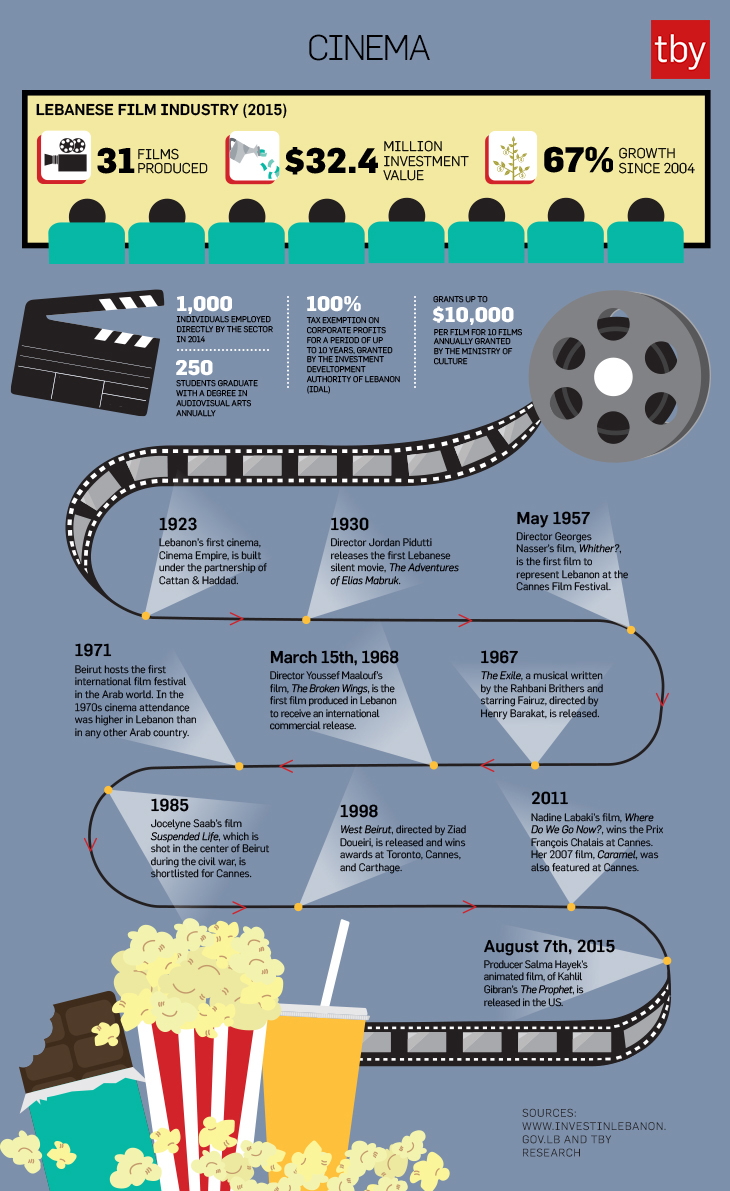 Share on:
With its extraordinary creative energy and blend of Middle Eastern and European architecture catering to almost any type of staging required, Lebanon's film industry is firmly back on track, ushering in a new golden age of cinema.

The last decade has brought a renaissance of sorts for the Lebanese film industry, with several big name productions attracting international recognition. However, the Lebanese film industry has been around since the late 1920s, flourishing during the 1960s and ’70s. The first silent movie was produced in Lebanon in 1929 by Jordano Pidutti, a young Italian cinematographer living in Beirut. The movie, entitled The Adventures of Elias Mabrouk, was filmed in one of the Sursock palaces, Raouche coffee shop, and some of the back alleys of Beirut. The film was a huge success and led to a sequel by Rachid Ali Chaabane, The Adventures of Abu Abed. Unfortunately, the glory did not continue for long, as Pidutti was forced to stop filmmaking due to the lack of financing.

In 1933, Lummar Film, founded by Herta Gargour, produced the first sound Lebanese movie. In the Ruins of Baalbek, directed by Julio de Luca and Karam Boustany, was a huge financial success. Unfortunately, the rise of Lebanese cinema did not last long, as a few years later, Lebanon (under the French mandate at that time), faced a shock related to the Second World War. Film production was then neglected and replaced by an interest in news and contemporary events.

In the meantime, however, many foreign filmmakers, especially Egyptian, had their eyes on Lebanon, mainly because of its freedom of speech, open-minded population, and beautiful landscapes. Yet it took Lebanese cinema until the 1950-60s to gain more importance, with The Remorse, Two Hearts and One Body, White Poison, The Devil’s Cart, and You Are My Life, directed by Georges Kahi, Red Flowers by Michel Haroun, and The First Melody, Hello Love, and The Folk Song by Mohammed Selmane. And of course, there was Georges Nasser, the first filmmaker to present Lebanese movies at the Cannes Festival—Where? in 1958, and The Little Stranger in 1961. However, at some point, Nasser was accused of trying to imitate the French New Wave and upon his return to Beirut, he was unable to find theaters willing to screen his movie, especially as public preferences switched towards Egyptian films.

Once again challenged, Lebanese cinema was outshined by its giant Egyptian counterpart. However, things have soon changed as Egypt was drained of its movie directors and intellectuals during President Abdel Nasser’s regime. Prohibiting all forms of freedom and nationalizing Egypt’s film industry in 1963 headed Lebanon towards becoming a film set for the Egyptian cinema. With studios popping up all over the country and considerable increase in production, Lebanon soon became the second largest film production zone after the United Arab Emirates, leading the country to experience what is widely regarded as the golden age of the Lebanese cinema.

Local filmmaker such as Mohammed Selmane and Joseph Ghorayeb took advantage of the Golden Age and marked their place in the history of the Lebanese cinema. At that time, foreign filmmakers also shot films in Lebanon. In 1964, Jean Becker filmed Cutout, and three years later, Georges Lautner shot The Big Grasshopper. Thanks to such artists, at the turn of the 1960s and ’70s, cinema attendance in Lebanon was the highest among Arabic-speaking countries, with most of the activity taking place on lively Hamra Street. These halcyon days lasted until 1975, when civil war broke out, effectively cutting Beirut in two and disintegrating Lebanon’s finest cinemas.

Today, the movie industry is back on track, taking full advantage of Lebanon’s unique creative energy and diversified scenery of beaches, mountains, and a blend of Middle Eastern, European and ancient architecture, which can easily cater to almost any type of staging required.