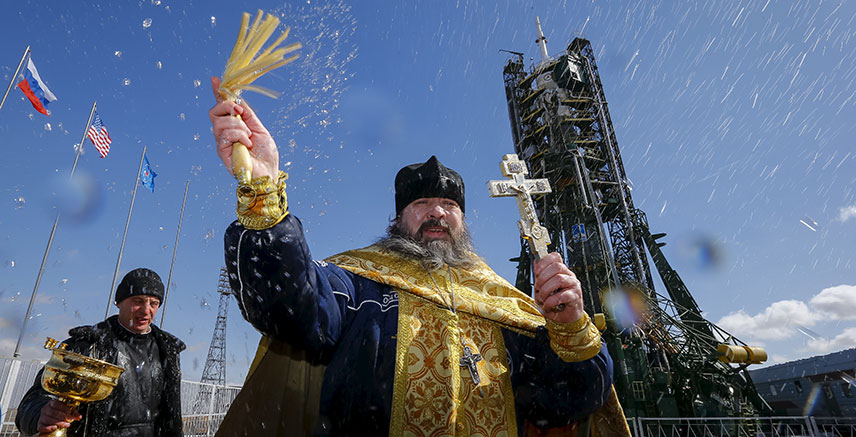 Share on:
“I would annex the planets if I could,“ Cecil Rhodes, the quintessential British imperialist, is thought to have said. Though he failed to get beyond the troposphere, the dream of space travel is alive and well in today's world.

An Orthodox priest conducts a blessing in front of the Soyuz TMA-20M for the next International Space Station (ISS) crew at the Baikonur cosmodrome, Kazakhstan, March, 2016

Despite the US gradually cutting back on its space program, other nations are making strides to develop their own, partly as a means of fulfilling mankind’s unceasing need to expand, but also as a means of diversifying away from hydrocarbons.

The UAE sent its first satellite into space in 2009, just six years after founding its space program, and the country has been working steadily to develop the region’s most advanced space program in record-breaking time. For starters, it wants to launch a Mars-bound unmanned probe in 2020 and land it in time to mark the country’s 50th anniversary in 2021—the equivalent of Kennedy’s Moon Shot, as UAE ambassador to the US, Yousef Al Otaiba, put it. Achieving this, he said, will be a “vision for the future” that will “excite a new generation of Emirati and Arab youth.” By 2117, Prime Minister Sheikh Mohammed bin Rashid Al Maktoum recently tweeted, the country hopes to be involved in the creation of a mini-city on the red planet.

In addition to various research centers on earth, such as the Al Ain Space Research Center and the Mohammed bin Rashid Space Center, the UAE’s satellite controller at Yahsat already has three satellites in orbit and has plans to imminently launch another, Al Yah 3, that will make Yahsat’s broadband services available to another 19 countries across Latin America and Africa. Altogether, the Emirati space agency has raised USD5.2 billion from public and private sources (compare this to the NASA’s annual budget of USD19 billion, even after cuts).

In addition to owning a 37.8% stake in Richard Branson’s Virgin Galactic, the initiative to take civilians to outer-space for USD250,000, the country is also working in close collaboration with Boeing and its own Khalifa University Space lab to encourage its students to compete to have their experiments conducted aboard the International Space Station. Though the country’s program mostly revolves around satellites communications today, it has vast potential for growth as the government seeks creative ways to diversify its economy away from oil, broaden the country’s knowledge-pool, and take advantage of the Azerbaijan’s ideal setting (large coast line, proximity to equator, vast deserts) for space launches.

As if to one up Rhodes, in 1973 the Nigerian poet Odia Ofeimun wrote, “We are annexing the kingdom of the gods” in reference to man’s first ever moon-landing. Though a tad tardy to the game, his nation has hankered for a program of its own ever since. Following decades of political unrest, the ascendance of a democratically elected civilian government in 1999 finally got the ball rolling. Foreign sanctions in place for decades were lifted in 2000 and USD93 million was set aside to establish the National Space Research and Development Agency (NASRDA) and the National Space Program (NSP).

In its first decade, the program launched five satellites from foreign soil, beginning with NigSat-1 from Plesetsk, Russia in 2003. Most recently in 2011 a joint venture with a UAE-based company that netted the NSP USD200 million over 15 years, an impressive return on investment for such a young program.

Though the country has plans to build a domestic launchpad, efforts to do so have been hampered by the collapse in oil prices and the Buhari government’s current struggles with groups such as Boko Haram.

As it is, only one university in the country teaches astrophysics, and the majority of Nigerians who obtain related qualifications from Caltech, MIT, and related universities often remain abroad.

Nonetheless, the rudiments of a domestic program are already visible in Abuja, the federal capital, where NASRDA has built a sprawling campus dedicated to the design, construction, and launch of a domestic satellite by 2020. Though its ultimate goal is to put the first African astronaut in space by 2030 entirely using Nigerian expertise, the country is eager to develop its space program for far more practical reasons in the short- and medium-term. These include monitoring elections, tracking Boko Haram positions, controlling urban sprawl, analyzing weather patterns, and determining where the best soil for rice cultivation is.

One of the biggest elephants in the room at the close of the 20th century was Kazakhstan’s nuclear missile arsenal. After all, by the end of 1991 the country had suddenly become the fourth-largest nuclear power in the world, with more than 1,400 nuclear warheads in its possession. While it was quick to deactivate its ballistic missile program in the 1990s under a series of international treaties and conventions (the Lisbon Protocol, SMART-1, the Treaty on the Non-Proliferation of Nuclear Weapons), it launched its own space program in 2007 using much of the same infrastructure left behind by the Soviet defense and exploration programs.

For starters, there is Baikonur Cosmodrome, the largest space complex in the world. At more than 11,000sqkm, an area larger than the state of Delaware, Baikonur has 15 launch pads, five tracking and control centers, propellant and fuel facilities, and 11 assembly buildings—not to mention the related academic and research facilities also inherited from the USSR.

Though it leases the complex to Russia (for USD115 million/year through 2050) for both military and civilian purposes, it is currently working with Moscow to develop the Baiterek complex, a space launch facility which is slated for completion by 2022. Angara A5 rockets, built entirely within Baikonur, will be launched from there.

Though an initial satellite launched in 2006 failed two years later (KazSat), Astana has since launched two more that are still in orbit, KazSat-2 and KazSat-3, built with the help of Russia’s Khrunichev Institute. The country is currently trying to enter the Missile Technology Control Regime (MTRC) to enhance its space program, though the latter has accepted no new members since bringing Bulgaria on board in 2004.

However, as the world’s only facility serving International Space Station (ISS) missions, Baikonur’s importance goes above and beyond the prerogatives of Moscow and Astana alone.

Though tropical maritime trade hubs might not seem the most obvious candidate for hosting space programs, one mustn’t forget that the closer to the equator one launches, the better. And as one of Asia’s most dynamic economies and ambitious states, Malaysia is fast becoming an important player in the market.

Though the Malaysian Center for Space Sensing was launched as early as 1988, it was not until 2008 that the country put its first microsatellite into the earth’s orbit atop a Russian Dnepr rocket. A year before that, the first Malaysian astronaut traveled to the International Space Station aboard the Russian Soyuz TMA-11, in what is now celebrated as the Angkasawan (“astronaut”) program—launched from Baikonur, no less.

The country also has a sophisticated satellite system known as MEASAT Satellite Systems launched in 1996 and built in partnership with Boeing that now has a fleet of six geostationary satellites. The biggest of these, MEASAT-1 and MEASAT-2, were launched from the Kourou space center in French Guiana, and spent 12 years in orbit before being decommissioned. A fourth and fifth, MEASAT-3 and MEASAT-3a, were launched from Baikonur in 2006 and 2009, respectively—the latter built this time by a smaller US manufacturer, Orbital. The latest, MEASAT-3b, was built by Airbus and launched once again from French Guiana.

Already a bustling commercial hub, cosmopolitan melting pot, and self-proclaimed emerging leader of the Islamic world, much of Malaysia’s interest in developing a viable space program has to do with boosting its national image. But its quest to reach the heavens serves more than vanity: its RazakSAT satellite (hopefully soon to be joined by the RazakSAT-2) is a sophisticated tool with which the government carries out mapping and monitors critical agricultural, fishing, and urban and coastal developments across the country. As with other emerging economies, the overarching goals of developing a more robust space program are not only linked to national pride and economic diversification, but something less tangible. As one minister called it, “brain gain” is the objective; enhancing the country’s ability to retain its best minds through creative, technologically advanced programs that boost the country’s status and well-being.

Though newer to the game than others in this list, Azerbaijan’s nascent space agency is rapidly playing catch-up. In 2013 it launched its first ever communications satellite from the Kourou space center in French Guiana at a cost of USD120 million. As was the case in Malaysia, Azerbaijan’s inaugural satellite Azerspace-1/Africasat-1a was built with the help of Virginia-based Orbital. Equipped with 36 transponders (a device for receiving and transmitting radio signals), it will provide telecommunications services such as digital broadcasting, data transmission, internet access, and governmental communications to the Caucasus, Eastern Europe, Central Asia, and North Africa.

With an expected shelf life of 15 years, the launch of Azerspace-1/Africasat-1a is proof that Azerbaijan is in this for the long run. And since the space and satellite facilities once located in the country during the Soviet period have fallen into irremediable disrepair, the investments and research in technology and education that will be needed to sustain the program will be considerable.

As is the case with Nigeria and Kazakhstan, Azerbaijan is desperate to diversify away from a hydrocarbons-based economy. After all, these have been some of the most carbon-dependent countries in the world as a percentage of government revenues. Oil revenues represent 27% of Azerbaijan’s annual GDP, the ninth highest proportion in the world, though Kazakhstan (11th) is not far behind at 21% and Nigeria is close (21st) at 11%.