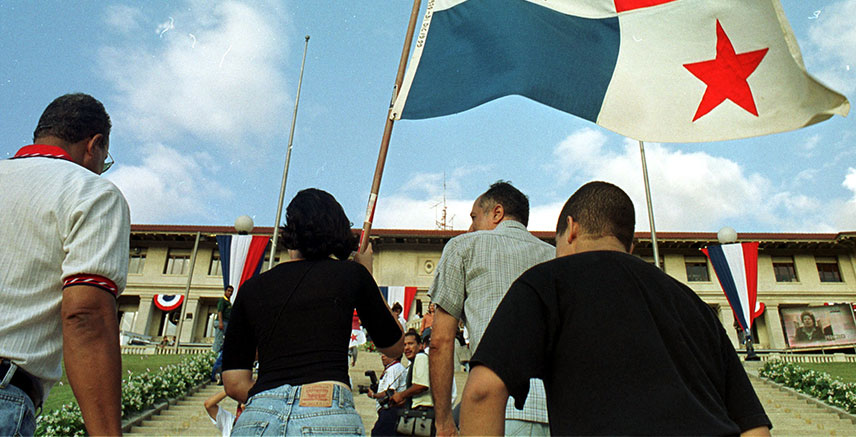 Share on:
We’ve heard about Panama hats and the world-famous canal, but did you know these unexpected facts about the Central American nation’s economy?

Panamanians carry Panama’s flag up to the Panama Canal’s administration building after the US lowered the American flag for the last time in Panama, December 30, 1999

A 2009 UN report on maritime transport revealed that about 22% of the world fleet in deadweight tonnage uses the Panamanian flag.

Put in other words, Panama has the largest number of cargo vessels and bulk carrier ships registered under its flag, accounting for around a quarter of the global fleet, despite the fact that the Central American country represents barely 0.05% of the world population.

This is the result of a common business practice in the maritime sector known as “flag of convenience.” This term is used to define ships that are registered under the maritime laws of a country different to that of the vessel’s owners.

Shipping companies do this because in certain countries such as Panama, the Bahamas, and Cyprus, among others, the taxes and safety requirements are more lenient than in developed nations.

Panama, with 183,503 ships registered in 2009, is the destination of choice for numerous maritime companies. Japanese transport firms typically favor the Panamanian flag for their ships.

Over 500,000 companies have their headquarters in Panama

As of January 2017, 134 companies in Panama had registered for the Headquarters of Multinational Operations (SEM in Spanish) program, a government initiative designed to ease the process of establishing a regional base in the country.

Over the last decade, large multinational blue chips from many countries, including ABB, Heineken, Nestlé, Nike, Diageo, Telefónica, and Dell have already filed for SEM. The whole list of companies can be seen on the website of the Ministry of Commerce and Industries.

Many of these multinational firms have chosen Panama for its unique geographic location.

But the main attraction for the companies is the special legal status introduced by the Ministry in 2007. So far the SEM program has brought an estimated USD820 million in investment and nearly 5,500 jobs to Panama.

Panama accounts for the bulk of FDI flowing into Central America

In 2018, Central America as a whole attracted over USD43 billion, with nearly USD5.8 billion invested in Panama alone.

While about 75% of all the region’s FDI came to Panama and Costa Rica, the remaining quarter was divided among Honduras, Belize, Guatemala, and El Salvador.

Panama’s GDP per capita nearly doubled between 2010 and 201

Panama reported the fastest-growing GDP per capita levels in Latin America between 2010 and 2015, almost doubling in just five years.

This indicates that the country’s high growth rates (expected to remain above 6% for the coming years) are raising the standard of living across the country’s 3.9 million population. Between 2008 and 2014 the number of people living in poverty in Panama dropped by almost 10%.

The Panama Canal represents about 40% of its economy

Nearly half of the country´s GDP is tied to revenues generated from the canal.

On the one hand, its contribution to the Panamanian economy highlights the country’s strong dependence on this waterway.

On the other hand, Panama’s key geostrategic location leaves carriers with little option but to pay to traverse the isthmus using the canal.

With the recent expansion of the waterway, this income is likely to steadily increase. The existing channel was made wider and deeper than before, allowing heavier and more densely packed ships to cross from the Pacific to the Caribbean and vice versa.