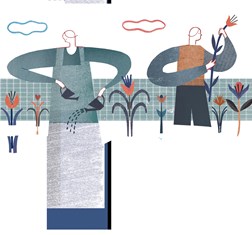 Share on:
The blooming of Colombia's billion-dollar floral industry is hoped to lead to a renaissance of the country's agriculture sector.

Currently agriculture is not a major contributor to the nation’s GDP, but in the heyday of the Colombia’s agriculture sector at the turn of the 20th century, the famous coffee boom kickstarted a period of economic growth that practically changed the face of the country for good. These days, however, the agriculture sector is diversifying away from coffee and bananas much in the same way that its overall economy is trying to move away from the export of crude oil.

The general economy has been faring well in recent years despite many ups and downs. Regarded as the second-largest economy in Central America and one of the fastest-growing in the world, Colombia has been experiencing a period of stellar growth since the early 1990s, resulting in a roughly 10-fold jump in the GDP per capita between 1990 and 2015.
In such a favorable climate, Colombia’s agriculture sector is making a comeback to the forefront of the nation’s economic activities—this time with the export of cut-flowers. In 2006, floriculture formed a negligible portion of its agricultural output; however, the export of cut-flowers and flower buds generated over USD1.3 billion in 2016, according to the World Trade Organization (WTO).
Famous for its biodiversity and situated near the equator, Colombia has an ideal ecosystem for the growth of exotic and tropical flowers as well as the more commonplace varieties. The Bogotá savannah, in particular, is most suited to the cultivation of flowers thanks to its more-or-less stable climate throughout the year and legendary 12-hours-a-day sunlight. It is estimated that some 300-600 farms clustered in the Bogotá savannah area are now engaged in the newly blooming floral industry.
According to a 2015 report released by the US’ Foreign Agricultural Service, around 20,000 acres, mostly in Bogotá and the Rionegro Valley near Medellí­n, are used for floriculture enterprises. Given the delicate nature of flowers, their cultivation mostly takes place inside purpose-built greenhouses, which are, at times, set up by foreign investors.
Indeed, the first attempt to produce cut flowers in Colombia was by a young American entrepreneur who noticed Bogotá’s potentials for turning into a major exporter of buds and flowers in his student years in the 1960s. With an overall investment of USD100,000 David Cheever and three other partners cofounded the country’s first-ever floriculture company, Floramérica, and they exported their first yield of carnations to the US just before Mother’s Day 1970.
Although carnations are still in demand, roses are by far the most popular exported flowers these days, generating over USD350 million in 2017 for Colombia. Something in the region of USD300 million worth of carnations and chrysanthemums together were exported in the same year. Colombian flowers are mainly bound for the US, which is the biggest importer of the country’s cut-flowers. Well over 50% of the US flower market is supplied by Colombian producers, and Bogotán flowers can easily be found in American chain hypermarkets such as Walmart. Nevertheless, Colombian flowers these days also end up in places as far away as Japan and Russia. The floral trade has been so prosperous lately that flowers form a large portion of all cargo transported between the Miami and Bogotá airports. During the high season—before Valentine’s Day and Mother’s Day—up to 30 cargo planes loaded with freshly cut roses, carnations, and chrysanthemums leave for the US each day, amounting to approximately 200,000 tons of airfreight per year.
In addition to being the Colombian flower industry’s leading customer, the US has also played an early role in the formation of the floriculture business. Back in 2006, when the rebirth of Colombia’s flower trade was underway, the US Agency for International Development (USAID) granted USD2 million to nonprofits involved in the sector. The cut-flower industry deserves more international support and foreign investment not only because it is faring well, but also because it creates job opportunities for women and younger workers, who account for over 60% of the workforce in the floral industry.