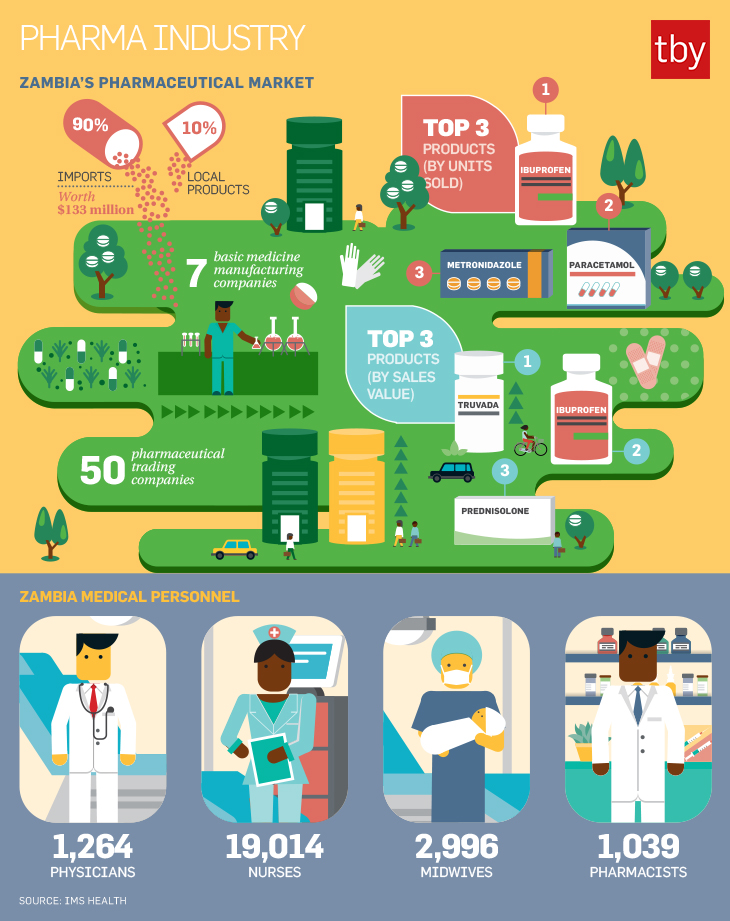 For What AILS You

Share on:
In order to meet the needs of its burgeoning population, pharmaceutical companies in Zambia must continue to develop in-country alternatives to costly imports.

Recently, several media and international institutions have drawn attention to Zambia’s population growth—the highest in the world. Depending on the estimate, this may not actually be the case, but the country is certainly near top of the list. In fact, according to projections by the UN, which are based on statistical models developed at the University of Washington by Adrian Raftery and his colleagues, Zambia will continue to have the fastest population growth for the rest of the century. The UN estimates that the fertility rate will only decline from the current 5.6 to 2.8 children in 2100, still higher than the current fertility rate of 2.5 children per woman worldwide.

Zambia is one of the most urbanized countries in Africa, and in conjunction with the rapid population growth rate, puts extra pressure on services such as roads, water supply, sanitation, energy, healthcare, and housing. In fact, according to the Central Statistical Office report, Zambia is projected to experience a housing deficit of 3 million by 2030.

This growth in population coupled with a growing middle class with increased purchasing power has pushed up the general demand for commodities and goods of all types, making Zambia home of one of the biggest mall booms in Africa. And demand for pharmaceuticals is no exception. As a matter of fact, experts such as Dr. Lackson Kasonka, Managing Director and Senior Medical Superintendent at the University Teaching Hospital (UTH) told TBY that “any prospective investor would do well to invest in production of pharmaceutical products.

According to a study by IMS Health, the pharmaceutical sector in Zambia is on the rise with a market worth nearly $133 million in 2012. That same year, the local manufacturing industry contributed approximately 10% of the sales in the country, while the remaining 90% came from imports. This represents an opportunity for pharmaceutical companies to manufacture in Zambia and save on transport costs to service not only the local market, but the eight neighboring countries in the SADC region. The Hon. Joseph Kasonde, Ministry of Health, told TBY that Zambia should not be dependent on imported drugs and “although manufacturing in terms of laboratory synthesis is not a realistic proposition for Zambia today.” He added that, “in the later stages of pharmaceutical processing and production, there is the possibility of setting up operations here.”

According to the 2013 Zambia Health Sector Profile by the Zambia Development Agency (ZDA), “Zambia and all her surrounding neighbours have relatively high burdens of diseases that require high consumption of pharmaceutical products.” This study shows that in 2013, there were only seven manufacturing companies in the country mostly engaged in the production of basic medicines and approximately other 50 pharmaceutical trading companies. According to the ZDA, the government of Zambia has been working to establish some incentives to promote local manufacturing and announced “a five year tax holiday for existing and future manufacturers, waived import duties and taxes on all raw materials, printing and packaging material for the pharmaceutical manufacturing industry.” The government has also eliminated “all import duties and taxes on capital expenditure for the pharmaceutical manufacturing”.

Harish J.N. de Silva, Managing Director of Sterelin Medical & Diagnostics, described how the pharmaceutical market in Zambia has evolved from total disorganization 20 years ago to being highly regulated. The authority in charge of regulating pharmaceuticals in the country is the Zambia Medicines Regulatory Authority (ZAMRA), which has been trying to cut down illegal imports over the last few years. According to Altaf Patel, General Manager of the International Drug Company Limited (IDC), local finished products cannot compete in price against cheaper imported pharmaceuticals and the government should further support local manufacturers by waiving taxes.