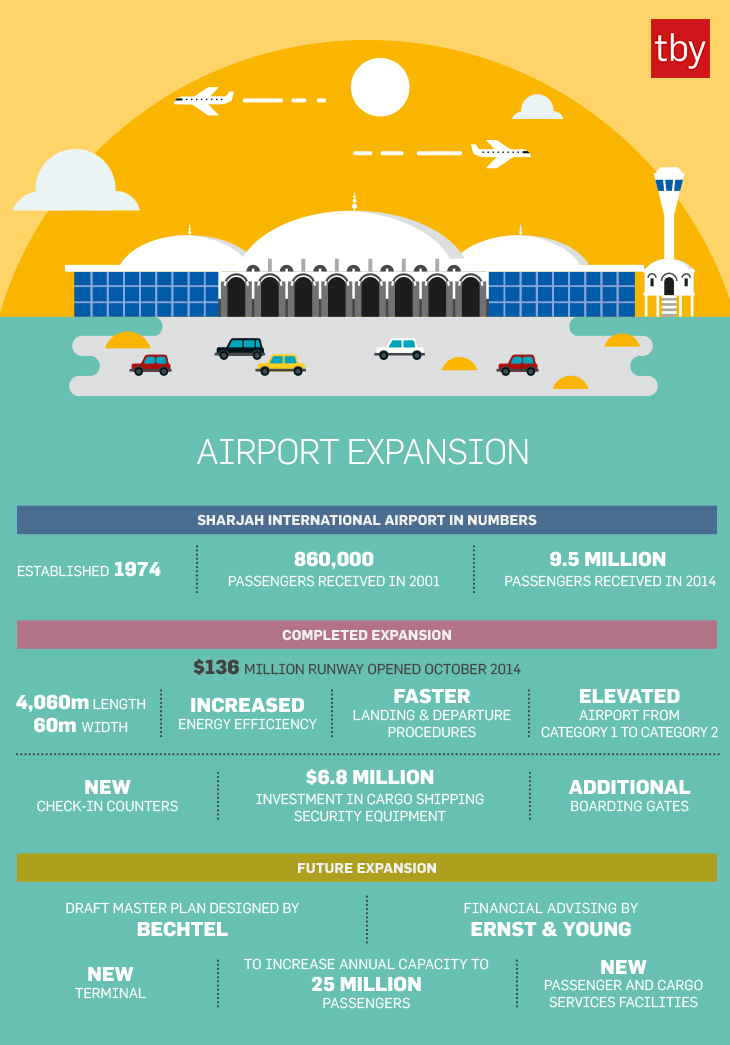 Share on:
The Sharjah Airport Authority has set its eyes on expanding Sharjah's International Airport to cope with the expected increase in both passengers and cargo in the coming years.

In 1932, Sharjah’s airport—at that time the first airport in the GCC—was a mere stop-over point of Imperial Airways on route to the Far East. Today, the bustling main hall of Sharjah International Airport, established in 1974, is filled with an abundance of people from various nationalities who are ready to embark on their journey to a range of regional destinations. In 2014, the Airport received 9.5 million passengers, marking a significant increase from the 860,000 that visited the airport in 2001. This increase is a testament to the niche market that Sharjah has carved out for its airport in the past decade by differentiating it from Dubai International Airport, Al Maktoum International Airport, and Abu Dhabi International Airport. Priding itself on more effectively catering to the regional traveler than its larger counterparts, His Excellency Ali Salim Al Midfa, Chairman of the Sharjah Airport Authority, points out that “our airport is more convenient for short-haul passengers because of our emphasis on faster processes.”

However, as passenger numbers go up and cargo volumes grow, an expansion of the airport and its facilities seems imperative. Therefore, the Airport Authority has initiated several expansion initiatives recently, of which the commissioning of a new $136 million runway in October 2014 was a veritable highlight. It is significantly more energy efficient than the old runway, it allows for faster landing and departure procedures, and it has propelled the airport from category one to category two in terms of visibility and landing capability. Combined, all these features culminate in expanding the capacity of the airport and the surrounding airspace.
Simultaneously, the capacity of existing facilities at the airport is increased by the construction of new check-in counters and additional boarding gates. Furthermore, $6.8 million has been invested into security equipment at the airport’s cargo shipping facilities in Sharjah in order to strengthen cargo handling capability, according to His Excellency Sheikh Khalid Isam Al Qassimi, Chairman of the Sharjah Department of Civil Aviation.
In order to firmly move the airport into pole position in the global aviation industry for the coming decades, a more comprehensive, more groundbreaking expansion is needed. Therefore, the engineering, construction, and projects management company Bechtel has been selected by the Airport Authority to design a new master plan for the airport, which should enable the airport to handle the projected 25 million annual passengers that are expected to move through the airport within twenty years.

This master plan will entail the building of a new terminal and the construction of new infrastructure around the airport, as well as new facilities for both passengers and cargo services. A hotel and shopping mall are also on the drawing board, and their construction should see the airport receive additional revenue. The Airport Authority will be advised by Ernst & Young on how to finance the project, and it is currently prospecting either state funding or a build-operate-transfer model, which would involve the participation of the private sector in constructing and operating the terminal.

While the draft master plan is currently under consideration by Sharjah’s government, expanding the airport seems to be absolutely vital if Sharjah wants to secure a slice of the cake in regards to passengers and cargo in the near future. To keep up with the growth of the UAE’s aviation industry, the construction of new facilities in line with the master plan should start sooner rather than later, as current facilities have been stretched to maximum capacity. If there was ever a time for take off, it would be now.