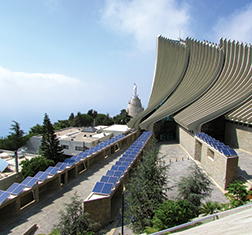 Share on:
Lebanon suffers from endemic power outages, especially in the regions outside of Beirut, where power can go out for up to 12 hours on some days, and strikes late last year exacerbated the shortage. The government is now working to change this.

By mid-2015, developments in the national energy sector have given long-suffering Lebanese cause for optimism. From more conventional oil and gas prospects to green energy solutions, evidence is mounting that Lebanon has the resources to not only meet its energy needs, but also has the potential to be a net exporter. Capturing this potential will not be easy, as market dynamics and regional developments are reducing investors’ appetites for large investments in the country. And with Iranian oil set to flood the international markets, Lebanon is in competition with plenty of other states that are vying for energy investment.

Like most Middle Eastern countries, declining oil prices are a key dynamic for economic change. In 2012, Lebanon’s oil imports ran up a price tag of $5.9 billion, equivalent to 27.6% of the nation’s total imports. Three years later, with prices nearly half of 2012’s $111.67 average price for a barrel of Brent crude, the national bill for oil imports could fall by up to $2 billion in 2015. This new state of affairs comes after four years of a record high oil bills, representing anywhere between 13 and 16.3% of the country’s GDP. In January 2015, the price of a barrel of oil had fallen 54% since June 2014. That same year, oil imports’ share of the GDP had fallen to 8.4% and it is expected to drop further to 5.5% in 2015, based on a 2% GDP growth rate and oil prices stabilizing at $50 per barrel (falling less if prices recover somewhat).

And while this benefits utilities companies, many Lebanese will find themselves hard pressed to pay their electricity bills at the end of the month. Remittances by Lebanese expatriates are estimated at $7.7 billion annually, or 16% of GDP, with the GCC accounting for 14.7% of this sum. And with a national GDP of $45.7 billion, these cash transfers are one of the country’s biggest sources of income, not to mention foreign currency infusions. In other words, when discussing Lebanon’s energy economy, it is important to take into consideration not only the economic and labor contributions of the Lebanese, but also the way in which financial, engineering, and transport related firms are integrated into regional energy markets. In 2013, Forbes released a list of the 100 most influential firms in the Arab world, and 17 Lebanese firms made the list, far ahead of their demographic representation in the region.

Starting with oil and gas, Lebanon has never had a large oil and gas sector—certainly not enough to meet domestic demand. In 2010, the country imported 120,000 bpd of refined oil products, which met 90% of total energy consumption. Before 2014, there were only seven wells in operation. However, massive discoveries of energy reserves could transform the country into a regional exporter. Its relative proximity to Turkey, Israel, and Europe make these new fields attractive to development companies.

The latest seismic data suggests that offshore energy reserves include more than 120 trillion cubic meters of natural gas. According to Global Risk Insights, extraction would generate around $100 billion over the next 20 years. An additional 1.7 billion barrels of recoverable oil is also lying untapped, and for a country that imports 97% of its energy needs, a sense of urgency is developing—especially in the private sector.

In January 2015, an agreement between Norway and Lebanon established a three-year agreement to cooperatively develop Lebanon’s oil and gas sector. Starting this year, Norway will provide technical support to the Lebanese Petroleum Administration and other ministries such as the Energy, Environment, and Finance ministries

The US is working to broker an agreement between Israel and Lebanon solve a maritime border dispute in an area that Lebanon is working to explore. In late 2014, the US reaffirmed its support for Lebanon’s efforts to transform into an oil and gas producing country. As of July 2015, Lebanon expressed willingness to allow the UN the authority to demarcate the zone to determine the actual boundaries for each country. With falling oil prices, allowing this costly dispute to drag out is harming national interests on both sides, and under such circumstances, both countries are more willing to come to the table and reach an amendable agreement.

These developments are part of an effort to push the offshore oil and gas agenda in front of lawmakers and to enact meaningful legislation in 2015. The local private sector hopes that officials will seize the opportunity to advance Lebanon’s energy sector and open the gates to foreign direct investment.

On the political front however, progress is slower. The cabinet committee in charge of finalizing the exploration and eventual extraction is headed by Prime Minister Tammam Salam, who has told the press that his committee is still reviewing the details of the decrees with the National Petroleum Administration. Government officials have also not managed to agree on a timeline, which is holding up the project. Beyond finding a timely solution to the country’s energy deficit, Lebanon’s gains could be eclipsed if it neighbor to the south gains a first-movers advantage. Having also recently discovered large deposits of natural gas, Israel has started to secure the regional export market for its product. Lebanon’s southern neighbor has already negotiated long-term agreements with Jordan and Egypt for its East Med Gas company, and plans are in motion to establish a unified gas strategy with Cyprus. This would see East Mediterranean gas delivered to the EU market. However, an early 2015 impasse between Nobel Energy and Israel’s anti-trust authority will buy Lebanon some time, but potential partners are watching the clock and delays are undercutting export opportunities for Lebanon.

Exploiting Lebanon’s hydrocarbon reserves will take some time, even without taking into account bureaucratic delays. To begin with, the country has very little existing oil and gas infrastructure. As this sector develops, this will have to be built from the ground up. In the interim, the Lebanese are addressing their energy deficit with a number of renewable energy projects—as well as with costly and polluting personal generators that are ubiquitous in homes and businesses in the country.

A study commissioned by the UNDP Country Energy Efficiency and Renewable Energy Demonstration Project for the Recovery of Lebanon (CEDRO), and launched in collaboration with the Ministry of Energy and Water identified two areas where geothermal developments were viable. A 1.5-km deep reservoir at 130 C near Akkar and another slightly cooler and deeper source in the Bekaa Valley could generate a combined 30GW per hour by 2025. And while this figure represents only 0.2% of total national energy demand, their implementation is affordable and viable. Construction of the first facility will cost an estimate $20 million.

The same UNDP-CEDRO study reported a high probability that exponentially more thermal energy could be tapped using the current model, to the point where thermal energy could feed a significant portion of the national energy grid. In fact, with the right capturing capabilities, geothermal could be exported in the form of electricity at a cost that would undercut conventional hydrocarbon rates. According Arthur Nazarian, Minister of Energy and Water, Lebanon’s geothermal assessments showed more than 70 times the energy required on an annual basis. However, Mr. Nazarian also cautioned that only a fraction of this energy could be captured with the existing technology.

Unlike geothermal, solar energy is readily accessible and the technology to capture it already exists. The most notable instillation in the country covers the Beirut River from the Armenia Bridge to the Yerevan Bridge in Bourj Hammoud. This solar field has a 1MW of capacity, and can generate 1.6 million kwh per year. In addition to electrifying more than 1,000 homes in the Beirut area, the Beirut River Solar Snake project offsets 1,000 tons of carbon monoxide every year and its proponents hope the model will catch on elsewhere in the country.

The Solar Snake project is part of a larger plan by the Lebanese Center for Energy Conservation (LCEC) that aims to ramp up production to 10MW by extending the solar field to 6 km. The attractiveness of solar in Beirut goes beyond environmental concerns. Since grid development has been stymied by social conflicts and under investment, solar units are relatively mobile and can be installed both on, and off the grid. In regions where power outages are common, the private sector has already installed more than 30MW of photovoltaic systems.

Phoenix ASACO won the tender to install the solar river facility, beating out 11 other companies. In other words, at least 12 companies are involved in the solar power sector and are large enough to take on a project of this size, with many smaller firms installing domestic units. The market is picking up pace, and by 2020, LCEC anticipates between 200 to 300 additional MW of solar energy will be incorporated into the national power grid, and off-grid as well.