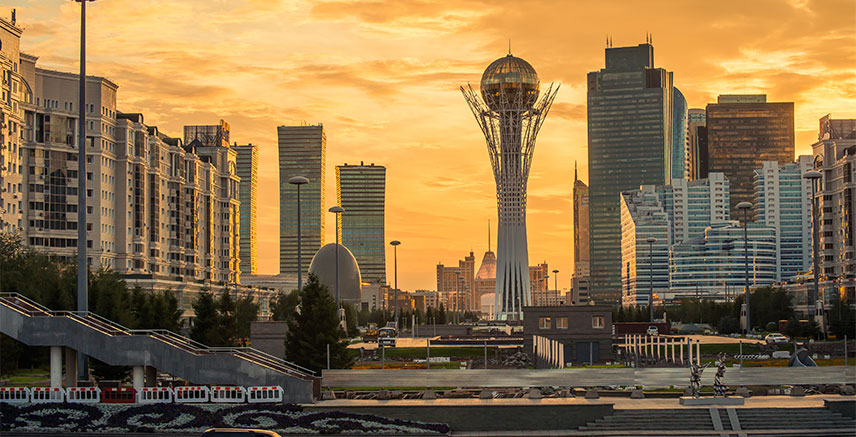 Share on:
Long a vital partner of America, China, and Russia, and a regional leader for the CIS countries, Kazakhstan is working to build on long-established ties with the wider world.

On the eve of the Nuclear Security Summit in Washington, DC, in March 2016, Kazakhstan’s Ambassador to the US, HE Kairat Umarov, set out the continued importance of the two countries’ partnership, pointing out that 2016 marks the 25th anniversary of diplomatic relations between America and Kazakhstan. America was one of the first countries to formally recognize Kazakhstan’s independence in 1991. The fourth and final Nuclear Security Summit saw Kazakhstan reiterate its position in favor of non-proliferation, in support of US President Barack Obama’s view. The country’s foreign policy is sometimes described as “triangular,” such is Kazakhstan’s role as a mediator between Russia, China, and America.

In energy, security, and other areas, Kazakhstan is an important influence on the Central Asian region—in matters of security as well as trade, development, and diplomatic issues. The country maintains good foreign relations globally and fosters especially close ties to its regional counterparts of Tajikistan, Uzbekistan, Kyrgyzstan, Turkmenistan, and increasingly is a key ally of both Russia, to the north, and China, to the east. Kazakhstan is a member of the UN, the Organization for Security and Cooperation in Europe (OSCE, of which Kazakhstan was chair in 2010), the Commonwealth of Independent States (CIS), the North Atlantic Cooperation Council, the Shanghai Cooperation Organization, and NATO’s partnership for peace program. The country is also a founding architect of the Eurasian Economic Union (EEU), an embryonic free trade group that seeks to build on Kazakhstan’s warm relations with Europe, in particular. Economic diplomacy is set to become ever more important in 2016-17, as the combination of cheap oil and low commodity prices generally applies pressure for both a broader economy, and a more international one. Proof, were this needed, of the country’s commitment, came in November 2015, when Kazakhstan was appointed the newest member of the World Trade Organization (WTO). The signing ceremony marked the end of two decades of discussion for membership, and saw the WTO welcoming Kazakhstan as its 162nd member. The membership was ratified by parliament in Astana on October 31, 2015.

Kazakhstan is a strongly presidential republic. Since independence from the Soviet Union in 1991, the president and head of state has been Nursultan Nazarbayev. The 75-year-old president remains popular, garnering 97.7% of the vote in the 2015 general election. He is credited with maintaining Kazakhstan’s economic and political stability, which are important factors given wider regional instability and economic turmoil. Mr Nazarbayev leads a parliament that is overseen by the Prime Minister who, since April 2014, has been Karim Massimov. The bicameral parliament is divided between the senate (47 seats; 15 appointed by the president, and 32 by local assemblies) and the 107-seat lower house, or mazhilis. Parliamentary elections for the mazhilis, held every four years, were last held on March 20, and saw the ruling Nur Otan party (of which Mr Nazarbayev is leader) retain its comfortable majority of 82% of the vote (around 10 million of the country’s 17 million citizens were eligible to cast their ballots) to secure 84 seats. Of the total number of seats in the mazhilis, 98 are elected, and nine are appointed. In 1997, Astana (formerly Akmola), replaced Almaty as the country’s new capital city (Astana means capital in Kazakh), and is the seat of the country’s government operations, and the center of its diplomatic activity.

A measure of the importance Kazakhstan places on foreign policy is the fact that the country has an official Foreign Policy Concept (FPC), running from 2014 to 2020. The multi-goal FPC seeks to: reinforce and expand national security and Kazakhstan’s defense strategy; strengthen the country’s sovereign unity; build regional peace and stability; project a positive image for Kazakhstan globally; and support economic and trade links, encouraging the country’s development in line with the longer-term and over-arching Strategy 2050.

January 2016 saw a significant advance for the FPC program with the signing, by Kazakhstan’s foreign minister, of an MoU to develop closer economic ties with Venezuela—a deal that symbolizes and reinforces Kazakhstan’s global reach.

In a meeting that signified a shift away from its comfort zone of fellow CIS countries, Iran’s foreign minister, Javad Zarif, visited Mr Nazarbayev in Astana on April 13, 2015. The meeting reaffirmed observers’ view that the two countries are set to become much closer diplomatic and trading partners—particularly in the wake of international sanctions being lifted from Iran early in 2016. The sound relationship goes back a long way, with President Nazarbayev having met all Iran’s presidents since his coming to power in 1991. The Kazakhstani leader met Hassan Rouhani, the current Iranian president, four times in 2015. The two countries are especially focused on the economic ties that are set to be greatly enhanced by the Great Silk Road project—and particularly the railway link known as the Kazakhstan-Turkmenistan-Iran link that connects Kazakhstan with the Persian Gulf. At the meeting in April 2015, Zarif praised their relationship, saying that “the Caspian Sea is a sea of peace and friendship, our common wealth.”

Expo 2017 will bring together many of Kazakhstan’s most important diplomatic and trading partners, and cement Kazakhstan’s reputation as the diplomacy hub of the region. In the run-up to the event, the government has relaxed its visa regulations, and extended visa-free travel to Kazakhstan for 19 countries around the world. Although the focus of the Expo is the future of energy, the event will bring together Kazakhstan’s many friends from around the world in a celebration of its wider ties and bilateral relations. One of its strongest links is with India. While trade is relatively small, diplomatic relations are close, and India was, in 1992, the first country outside the CIS to be visited by President Nazarbayev. India was also the first country to confirm its participation in Expo 2017. In 2016, Kazakhstan will host more than 30 conferences and fairs relating to the fields of energy, engineering, mining, agriculture, and industry.

WELCOME TO THE CLUB

One of the most challenging negotiations in the history of the WTO has come to an end and Kazakhstan has officially been accepted as member of the organization. This comes after two decades of talks with the WTO and makes Kazakhstan the organization’s 162nd member.A WTO working group approved Kazakhstan’s accession on June 22, 2015 and transmitted the package to the 161 members for formal adoption. A month later at the meeting of the WTO General Council, all WTO members approved the terms for the accession. “Together, we have done quite an impressive job. We are sincerely grateful to each of the WTO member states for their constructive approach and support throughout a very tough negotiation process. During the negotiations of our accession to the WTO, the configuration of Kazakhstan’s economy has changed dramatically.” President Nursultan Nazarbayev said.With relatively low trade levels in Central Asia, Kazakhstan’s membership in the WTO will boost competition and investment levels in the region. As the country’s current top export and import partners, namely China, France, and Russia, are all WTO members, many of the tariffs will fall reciprocally, benefiting traders and consumers alike. Although Kazakhstan’s accession to WTO might not bring immediate benefits, as the country currently exports mostly mineral resources, it will definitely support the government’s economic policy program “100 Steps,” which aims to transform Kazakhstan into a financial and transportation hub by diversifying its regional links and developing a western rules-based system. Moreover, Kazakhstan’s accession to the WTO is expected to benefit the country’s GDP by 3.7% in the medium term and 9.7% in the long term, if the country successfully removes barriers to foreign investment in business services. Goods will become cheaper, while investment in production facilities will rise, as the country becomes a part of the global value chain. Kazakhstan’s accession will ensure the improved business climate and diversification of Kazakh exports in the long run. Overall, WTO accession is expected to boost Kazakhstan’s growth and strengthen its position in the region.