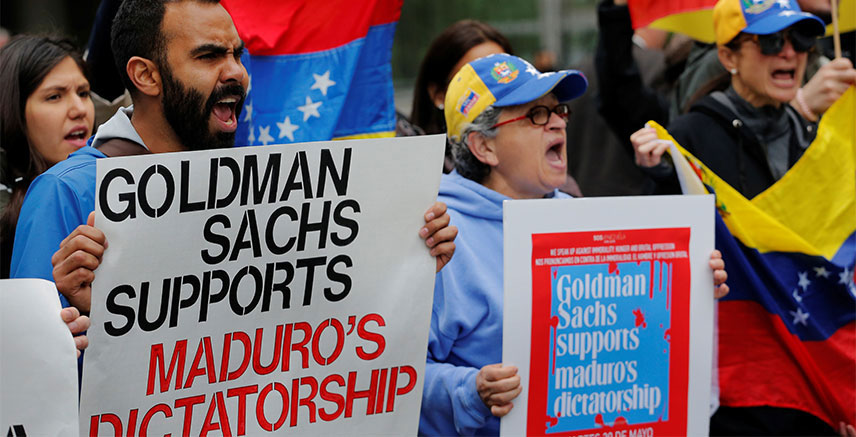 Share on:
To the outrage of the opposition movement in Venezuela, Goldman Sachs and other investors are banking on the collapse of the Maduro government and the probable debt restructuring that would follow.

Goldman Sachs has purchased USD2.8 billion in bonds, at 31 cents on the dollar, for approximately USD865 million, as Venezuela sinks further into civil disarray.

The bonds were issued in 2014 by the state oil company Petróleos de Venezuela SA (PDVSA), and will mature in 2022.

Despite the increasing likelihood of government collapse and looming debt default, investors are opting for long-term bonds, which have a higher recovery rate in the event of a regime change.

Goldman Sachs received backlash from President Nicolas Maduro’s opponents in Venezuela and opposition sympathizers, who have decried such investment amid the ongoing food shortage crisis as well as reports of human rights violations.

Government opposition has popularized the term ‘hunger bonds’ to draw attention to these investments in PDVSA bonds and their relation to the regime’s human rights violations.

As Venezuela is an oil-exporting country (with the largest reserves in the world), the oil price crash in 2014 naturally exacerbated political tensions and precipitated the present economic crisis.

The opposition’s conflation of the bond sales with the worsening situation for Venezuelan citizens is reflected in recent developments; the PDVSA made USD2.2 billion in bond payments in April 2017, while inflation is expected to rise by over 700% over the course of the year, according to IMF data.

Between November 2015 and October 2016, inflation for food products reached 552%, according to the Worker’s Center for Documentation and Analysis (CENDA). Estimates from the Bengoa Foundation for Food and Nutrition indicate that 25% of children are malnourished.

However, Goldman Sachs and other investors do not accept this zero-sum mentality, arguing that payment of the bonds does not necessarily correspond with political and economic stress in Venezuela.

Instead, investors are shifting the moral responsibility to the government. They identify the real problem as the corrupt regime, broadening the scope of the problem and deflecting the spotlight from their PDVSA bond purchases.

While government opponents and investors clash over ‘hunger bonds,’ political and economic turmoil continues. However, the international community has continued to avoid involvement in the crisis, despite the increasingly violent nature of the protests in recent months.

Many regional organizations have issued statements on the issue but are taking little action. In a message on May 20, 2017 regarding the crisis in Venezuela, the Secretary General of the Organization of American States (OAS), Luis Almagro Lemes, called for immediate general elections as the “only viable solution” for saving democracy.

He claimed that all other attempts at dialog had failed.

On June 1, OAS foreign ministers met to discuss the crisis in Venezuela, although no declaration could be agreed upon.

In April 2017, the European Parliament also held a meeting to discuss the worsening state of democracy in Venezuela and called for more moderate action to resolve it, calling for “an agreement between the government and the opposition” and stressing “that this should be done by the Venezuela’s legitimate representatives.”

Venezuela’s foreign exchange reserves decreased from over USD10.6 billion in January of this year to USD10.1 billion in April, the lowest point reached in 21 years. Regardless of regime change, Venezuela is heading toward defaulting on its debts, though its enormous oil reserves could encourage bond restructuring to save the country’s position in international markets.