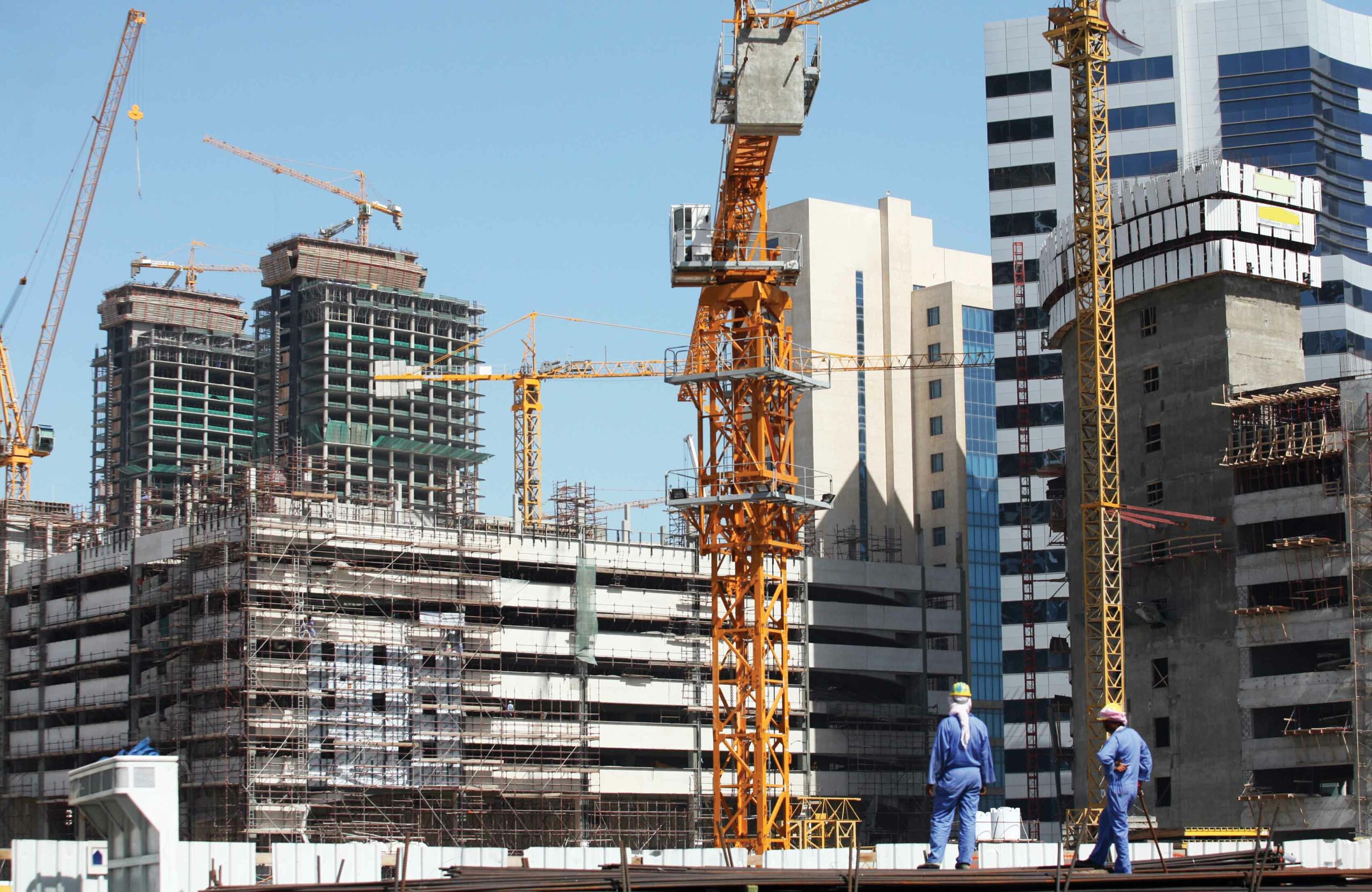 Share on:
Infrastructure projects are a focal point for activity in the construction sector, while the real estate market matures to meet the needs of different segments.

Having displayed steady growth for the past decade, Qatar’s real estate and construction sector is forecast to continue growing strongly in 2017 and over the medium term. As the supply of residential and commercial space outpaces demand, sporting facilities, healthcare establishments, and general infrastructure are the main drivers of sector growth. In 2017, the construction and real estate sectors are expected to receive an estimated QAR46 billion of investment.

In the real estate segment, demand is growing for low- to medium-income housing, while demand for luxury and high-income housing has slowed down overall. Major retail developments expected to come online in 2017 include Doha Festival City, North Gate Mall, and Al Hazm Mall, projects that will contribute to expanding retail stock by around 1.9 million sqm in the lead-up to 2022. Meanwhile, rents for both residential and office space have declined since 2015, likely in response to oversupply and global economic trends. Compared to 2016, the median price for residential space fell by nearly 12% YoY, while villas and apartments saw an 18% and 15% drop, respectively, over the same period.

According to Dubai-based ValuStrat, the total combined housing stock of villas, residential houses, and apartments was approximately 281,000 units by year-end 2016. Nearly 1,500 units were added in 1Q2017 alone, with 17% of them villas and 83% apartments. The majority of new residential projects were concentrated in Lusail, the Pearl, and Al Sadd. An additional 5,800 units are planned for 2017, including five buildings in the Pearl and 10 in Lusail.

New developments unveiled in 2017 include 77 apartment buildings at Al Swida Village in Al Thumama, apartments and villas in Lusail Azure, Telal 2 luxury apartments in Lusail, the Millennium Apartments in the Pearl, Jumanah Tower 2 in the Pearl, and Ezdan Oasis in Wukair, a project of nearly 9,000 units. All are expected to be completed by 2020.

The government’s efforts to diversify have protected Qatar from the full effects of variable external markets. GDP growth of the non-oil sector reached 5.6% in 2016, with the construction sector one of the largest contributors. The sector is expected to account for 45% of investments between 2015 and 2018, proving that economic pressure has little effect on Qatar’s construction market as a whole. As many large-scale infrastructure projects have already been awarded, the sector continues full speed ahead.

Major contracts include the Doha Metro, the expansion of Hamad International Airport, and a number of key highways. Construction sites are also scattered around the country in preparation for Qatar National Vision (QNV) 2030 and the 2022 FIFA World Cup, with many due for completion in 2018. In February 2017, reports revealed that Qatar spends an average of USD500 million per week on major infrastructure projects in preparation for the World Cup, and this level of spending is expected to continue until 2021. “With construction continuing apace for the World Cup and the QNV in full swing, there will be a plethora of prospects for investors,” Nasser Al Ansari, Chairman of Just Real Estate (JRE), told TBY.

Construction companies have zeroed in on projects that are in line with the national vision and support initiatives aimed at staging large events. However, with the number of new projects thinning out, local contractors are looking at ways to maintain momentum over the long term.

Qatar’s Public Works Authority (Ashghal) is currently involved with numerous projects valued at USD27 billion, many of which will be delivered over the medium term of five to seven years. The company also has announced its plans to build 60-70 healthcare centers in next 10 years, as well as carry out the comprehensive Expressway Program, an infrastructure project that aims to deliver approximately 800 kilometers of roads to areas throughout Qatar.

With many major handovers set to occur in 2017, global operators such as Hill International are preparing for change. This year marks Hill International’s completion of the Mall of Qatar, North Gate Mall, and the Qatar National Museum, among others. “Major projects carried out by the public sector should be delivered within 2017 and 2018,” Karim Yazbek, Vice President and Country Manager of Hill International in Qatar, told TBY. Although the economy still remains tightly linked to the public sector, the completion of several projects signals a potential increase in private sector involvement in major developments such as Lusail City and Al Wa’ab City. For Yazbek, however, “Our line of business will continue in project management… With fewer new construction projects and major projects being delivered, a paradigm shift to facility management will also happen.”

Mohamed A. R. Fakhro, CEO of Tanween, has also anticipated a lack of new megaprojects and responded accordingly. “Qatar’s real estate market has gone through drastic changes and this has pushed us to redefine our business model,” he said, adding, “As we are aware there will not be any more megaprojects such as Lusail City or Mesaimeer City to be delivered, we are focusing more on the property and asset management side. Currently, we have under our management around 1,300 different properties and seek to grow that portfolio.” Tamween manages the 18 buildings of the Park Residences at Mesaimeer City, while maintaining a 98% occupancy rate. The company also manages properties at the Pearl and is seeking to increase its presence in Lusail and West Bay.

Local operator Medgulf Construction Company has been present in Qatar for over four decades. To continue its legacy, the company is dedicated to maintaining a strong reputation, as well as building long-term relationships. To date, the company has built approximately 80% of Qatar’s oil and gas pipelines. Chakib Nayfe, General Manager of Medgulf emphasized the company’s ties with international actors in an interview with TBY: “We are well connected with international partners, which could help us to develop major projects,” he said. “The diversification of the Qatari economy will require contractors to also diversify their portfolios. As an example, Medgulf is currently moving into oil and gas offshore work.”

The urban landscape of Doha is starting to come together in a comprehensive way as developers look toward the opening of the Doha Metro, along with the appearance of new market segments. Al Wa’ab City, Msheireb Downtown Doha, and a collection of new retail and office space are all slated to transform the city’s real estate sector significantly.

As of 1Q2017, Qatar’s office space supply was 3.6 million sqm, with approximately 40% of the stock concentrated in West Bay. Lusail City is adding 500,000sqm to mix, and will have the capacity to accommodate approximately 170,000 employees by the end of 2017. Also during the first quarter of 2017, the Government Services Complex was launched at the Pearl, and is now home to 10 government agencies and office space rentals.

At the same time, retail supply has reached 1.1 million sqm, with 23 retail properties in total. There are currently 10 malls are under construction, five of which are expected to open in 2017: Al Hazm Mall, Doha Mall, Mirqab Mall, Katara Plaza, and Tawar Mall. By year end, these new developments will contribute an additional 600,000sqm to the retail mix for a total of 1.7 million sqm. According to ValuStrat, the total available retail space in Qatar is slated to exceed 2 million sqm by 2019.

Msheireb Downtown Doha is part of a new financial district in the capital city, comprised not only of the Qatar Financial Center (QFC), but other companies occupying approximately 100 mixed-use buildings expected to open in 2017. “We are currently working to attract people and businesses to the project’s residential, commercial, and retail areas,” Abdulla Hassan Al-Mehshadi, CEO of Msheireb Properties, told TBY. By testing the market and opening up a selection of Msheireb’s museums and public spaces to visitors already, the project is gaining attention. “With Msheireb Downtown Doha coming to life this year, our ambitions are limitless. Once the development is fully completed in mid-2018, the project will be able to compete on a global level,” Al-Mehshadi said

Al Wa’ab City is a unique project for the country in terms of its location, accessibility, and accommodation options. Located at the crossroads of Doha’s main communication arteries and at the center of the city, Al Wa’ab has eight entrances that allow residents to bypass traffic. The development features 47 different types of homes ranging from luxurious villas to contemporary apartments. “Overall, we can accommodate 8,000 people in over 2,000 homes, which is one of the lowest population densities amongst residential developments in Qatar. All this comes with diverse entertainment offerings such as clubhouses, gym and spa, swimming pools, and a children’s playground,” Ziad Halaby, Senior Construction Manager at Al Wa’ab City, explained to TBY. The project also has plans to offer 100,000 sqm of retail space and 200,000 sqm of office space. As well, the commercial avenue at Al Wa’ab will be home to coffee shops, retail stores, markets, and restaurants. “We also provide all the services a resident may need, such as a school, a nursery, and medical center. All in all, a residential project like Al Wa’ab City does not exist anywhere else in Doha,” Halaby concluded.
As the market branches out into various segments and the identity of different urban areas in Qatar begins to take shape, the real estate sector is making tangible progress amid uncertain economic times. “Now there is a clear emergence of primary, secondary, and tertiary areas of the market,” Edward Brookes, General Manager of DTZ Qatar said. “This is quite natural for a maturing market.”