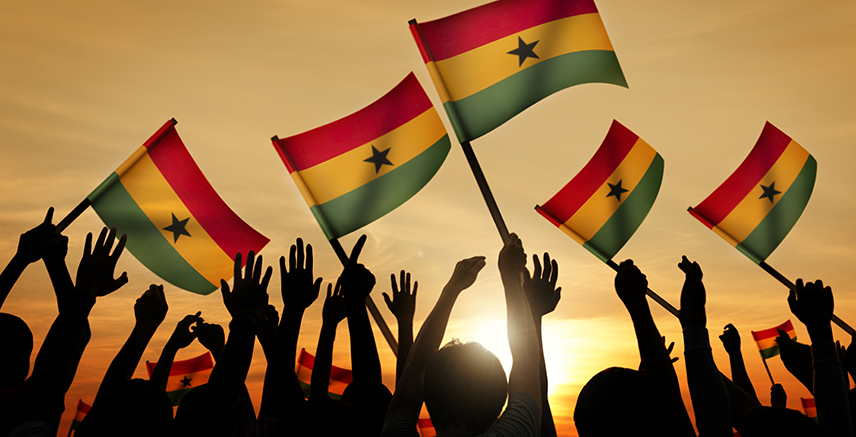 Share on:
In 2016, Ghana will again hold elections, as the nation approaches its 60th anniversary of independence.

The Republic of Ghana is a constitutional democracy, and stands out among its regional neighbors for its comparatively healthy political institutions. Despite a history of instability in the decades after independence, Ghana has developed a robust and democratic political system that is broadly commended by international observers. Freedom House has designated Ghana as free, and has given its highest rating for political rights within the region. The Electoral Commission of Ghana was created in 1992, following the dissolution of Jerry John Rawlings’s Provisional National Defense Council (PNDC) and the establishment of participatory democratic governance in the form of the “Fourth Republic.” Its role is to monitor and ensure that elections are transparent and fair, and its independence is assured under the constitution. Rawlings, after a period of authoritarian rule with the PNDC throughout the 1980s, capably managed a gradual transition to democracy which began with the establishment of this Fourth Republic. His new party, the NDC, won the first democratic elections, and Rawlings stayed in power until 2001, when the main rival political party, the NPP, put forward the liberal-democratic John Kufuor, another man with a long history in Ghanaian post-independence politics. Kufuor lost in 2009 to NDC candidate John Atta Mills, who subsequently passed away, necessitating a new vote in December 2012. The head of government and chief of state is President John Mahama, who has held power with his NDC party since a 50.7% win in those elections. However, the NPP won a significant minority, with 47.74% of total votes going to Nana Akufo-Addo. Turnout stood at just under 80%, a high figure for any state, and the vote was also declared free and fair by ECOWAS. The president and the cabinet, known as the Council of Ministers, form the executive branch of the government. The president is elected by direct vote, for four years at a time. Ghana’s citizens will once again exercise their right to vote in November 2016, when elections will be held using a two-round, first-past-the-post system. In recent elections, opposition parties as well as the incumbent NDC have made criticisms of the national voter registry, claiming that there have been repeated instances of ineligible individuals, either too young or not nationals of Ghana, being able to vote. However, the Electoral Commission, following a study by a dedicated panel, has concluded that the argument in insufficient and not backed up by enough evidence, and the current registry will be used in late 2016.

Ghana’s unicameral, 275-seat parliament is based in Accra, with members elected to serve four-year terms by their respective constituencies. Politically, the country is divided into ten provinces, namely Ashanti, Brong-Ahafo, Central, Eastern, Northern, Western, Greater Accra, Upper East, Upper West, and Volta. The next elections to the house will also take place in November, with change in the composition of seats likely. The NDC holds 150 seats, while the NPP has 120. The PNC and CPP each won a seat, while three independents comprise the remainder of the membership of parliament.

The judiciary is formed by a number of different courts, each with specific roles. The Supreme Court of Ghana, with its Chief Justice and 12 other judges, is the most superior within the system. The Chief Justice is chosen by the Council of State, a civil entity, and the decision may be approved or dismissed by parliament. After that, in terms of importance, the Court of Appeal, the High Court of Justice, and regional tribunals in each of the 10 provinces follow. Lower-level courts are selected by parliament, and these include the Circuit Courts and Magistrate Courts. The judicial system has emerged as over the past year as an area in dire need of reform, an issue that will remain politically sensitive during the election cycle. In 2015, the country’s biggest judicial scandal since independence was exposed by a journalistic investigation, with 34 magistrates and judges accused of asking for bribes and other corrupt behavior. The case is being pursued by the Supreme Court at present, and its conclusion will define the nation’s judiciary for years to come. On the global scene, Ghana has been increasing its diplomatic efforts in recent years. Under the guidance of the Ministry for Foreign Affairs and Regional Integration, Ghanaian foreign policy has developed in response to prevailing trends in international politics. Since independence, a balance between staunchly independent and pro-African policy decisions and pragmatic economic programs has characterized the nation’s interactions with other states. Prior to 1957, civil servants across the still-colonized nation were posted to higher positions in the Foreign Ministry in preparation for the imminent independence of the nation. With the inauguration of the Kwame Nkrumah administration, Ghana adopted a pan-African stance and became a key lobbyist for the newly decolonizing continent’s interests in the wider world. Ghana’s first leader established a dedicated African Affairs Secretariat, in a move which made clear his foreign policy preoccupations, and this organization was later merged with the Foreign Ministry following his ousting in 1966. Despite regime changes over just under a dozen different governments, the state’s international relations have remained largely consistent.

In the present day, the ministry is maintaining the key objectives of promoting Ghanaian interests abroad, contributing to the betterment of the international community, upholding international legal systems and agreements, encouraging peace in Africa and beyond, and meeting the obligations required by the various multilateral organizations of which Ghana is a member. The establishment of the African Union in 2001 revived the country’s involvement in the project of uniting the nations of the continent by appealing to their shared interests and needs. Its membership of the United Nations, ECOWAS, and the Non-Aligned Movement have allowed Ghana to legally push for resolutions to transnational and regional issues based on its own objective views, and permitted it to operate outside of the spheres of influence of either of the superpowers during the Cold War. Ghana is also a member of the World Bank, the World Trade Organization, and the International Monetary Fund.

Additionally, Ghana provides troops and experts to a range of UN peacekeeping missions across Africa and the Middle East, in Liberia, the DRC, parts of South Sudan, Somalia, Lebanon, and Western Sahara. The country’s long history of support for other African nations is well established, as noted by Jacob Zuma, President of South Africa, in an exclusive TBY interview. He noted that “As the first country to receive its independence on the continent, Ghana inspired and provided support to South Africa during the times of Apartheid. This is the background against which we base our relations—one of friendship, solidarity, and a common purpose to move forward together towards prosperity and progress.” Ghana runs its diplomatic operations out of a total of 55 embassies and commissions, and maintains 59 consulates-general to augment these offices. The majority of these missions are located in African countries, with a total of 25 countries across the continent benefiting from Ghanaian representation. It also holds observer status in the Organization of American States. Ghana has also shown itself to be ready to support its regional neighbors in other kinds of crisis situations. During the recent outbreak of the deadly Ebola virus, particularly in Cote d’Ivoire, Liberia, Guinea, and Sierra Leone to Ghana’s west, the nation played host to the UN’s emergency response headquarters. The global response to the potentially catastrophic illness was coordinated out of Accra, and the World Health Organization applauded the Ghanaian government’s involvement in containing the problem.

As Ghana moves forward with the electoral cycle over the course of 2016, the short-term future of the political environment will remain in flux. However, given the coherent and stable nature of the country’s foreign policy, even under the rule of different political parties, suggests that it will continue to play an active, positive role in West Africa and the continent at large.