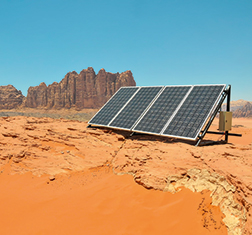 Share on:
Saudi Arabia is fast becoming a leader in green energy thanks to an ambitious government plan that seeks to take advantage of the Kingdom's natural resources and relationships with private energy firms.

The modern history of Saudi Arabia is inextricably linked with petroleum; the 1938 discovery of massive oil reserves under the Arabian desert sparked a half-century of growth that saw it become the world’s largest oil exporter and a cornerstone of the global energy economy. But times are changing. Alarmist peak oil predictions have been proven wrong over the past decade, but there’s no denying that the landscape has shifted in recent years. A fall in oil prices has forced the Saudi oil industry to increase production to record levels in order to generate the revenue the government needs to function. Well aware of the need to seek alternative energy sources, Saudi Arabia’s government is investing heavily in renewables, especially solar and wind. These new energy sources are a natural fit for the Kingdom’s geography, and the government’s willingness to form new public-private partnerships should lead to more aggressive development in the years to come.

Renewable energy currently accounts for less than 1% of Saudi Arabia’s production, but the government is taking strides to change that. The Kingdom’s Saudi Vision 2030 plan includes growth in renewable energy sources as one of its major targets, setting a goal of increasing energy from renewables to 9.5GW by 2023 and tripling renewable energy output by 2030. 2017 has seen the government continue to lead a push on renewable energy investment; in January, the Saudi Energy Minister announced that the Kingdom would begin taking bids for renewables projects as part of a medium-term investment strategy that will see the Kingdom spend between USD30 and 50 billion by 2023. The first round of bidding took place in 2015 for a series of solar and wind energy projects equaling more than 700MW; the firms awarded the contract will be granted full ownership of the plant, a Saudi first that reflects the government’s awareness that new forms of cooperation with the private sector are needed to remain competitive in the energy industry. In the past, the Saudi government has retained tight state control over all elements of the energy industry, but government leaders recognize that this model is no longer sustainable due to the fiscal realities the Kingdom is facing. Firms bidding for new renewables projects are still subject to a stringent set of fiscal and production requirements designed to ensure that the firm has the previous experience needed to succeed in the market, but the move to independent ownership means that the Saudi government is no longer required to make a financial commitment to get these projects off the ground. This is all part of a larger nationwide strategy that’s carefully moving toward privatization, and industry participants are largely positive about the new structure.

An interesting side effect of the government’s stringent capital and experience requirements is the creation of new partnerships between local and international firms. The Saudi government requires firms to have more than 1,000MW of renewable energy projects in operation, with at least one-tenth of that in an market outside the firms’ home country. Similar policies are in place of solar projects. Since few companies are operating on these scales, industry participants believe that the future of the sector lies in partnerships between local firms that have connections and experience in the Saudi market and international firms that have the size and capital needed to meet the large-scale needs of the Saudi market. Mohammed K. Mudarres, CEO of the Saudi Industrial Services Company, spoke positively about his firm’s previous experiences with international partnerships. “While SISCO has a good base of know-how and resources internally… for some major projects it is essential to have the international element of know-how and resources, as well as the investment,” Mudarres told TBY. “We have had great experiences with our international partnerships so far and we welcome the input that international partners bring.” Saudi Arabia’s global prominence and pre-established relationships with major energy companies are key here, as they already have the connections needed to dive right into major projects without struggling with intermediate steps.

Solar and wind energy are poised to take the lead in Saudi Arabia’s renewables strategy. The geography of the Arabian desert makes it a natural fit for solar and wind; the Kingdom receives more than 3,000 hours of sunlight annually and as the largest country in the Middle East it holds tremendous potential. The government’s Saudi Vision 2030 plan calls for ambitious solar infrastructure development and foresees “yellow oil” as playing a critical role in the country’s industrial infrastructure. As of 2016, Saudi Arabia had only 23MW of installed capacity, but the massive inflow of investment funds planned by the Saudi government is about to change that in a hurry. A number of major projects are underway through both public and private financing. The government is currently seeking bids for a 300MW solar project in Sakaka, located in the north of the Kingdom. ACWA Power International, a Riyadh-based firm, is one of the qualified forms shortlisted for the project. In an interview with TBY, ACWA CEO Paddy Padmanathan praised the “clear vision” being set by the government and expressed optimism at the future of the solar sector. “Saudi Arabia has fantastic solar resources, land is going to be given at a notional cost, the credit worthiness of the Kingdom is superior to many other countries, and there is a lot of funding capacity here,” Padmanathan told TBY. “[The new renewables tenders] is going to be a big program that will attract a lot of competitiveness,” he added. The solar industry is also set to be an essential part of the Kingdom’s industrial sector; the government expects its current tenders to generate around 7,000 jobs and become a source of steady domestic revenues through sales of excess energy.
Wind, too, is a natural fit for Saudi Arabia’s landscape and energy needs. The government announced plans for a 400MW wind plant in Midyan in early 2017 and had shortlisted a handful of firms as of mid-May. The Kingdom’s first wind energy turbine was commissioned in early 2017; the project, developed in tandem with American firm GE, installed an 85m high turbine in Turaif. The turbine will provide electricity to a Saudi Aramco facility in the city, generating 2.75MW and saving the equivalent of 19,00 barrels of oil. GE also installed a second turbine in Huraymila, north of Riyadh, and was up and operational as of early 2017. Hisham Al Bahkali, President & CEO of GE Saudi Arabia & Bahrain, was optimistic about the prospect of future wind energy projects in Saudi Arabia. “The Renewable Energy Project Development Office (REPDO)… is drafting the right regulations and working to have a conducive environment for private companies to contribute to the Renewables sector,” Bahkali told TBY. “GE is proud to contribute to this and to be a part of clean energy projects in the Kingdom.”

Saudi Arabia’s plan for new sources of energy also calls for the construction of two commercial nuclear reactors. After signing nuclear energy cooperation agreements with several countries, the Saudi government began more in-depth studies last year and met with the China National Nuclear Corp (CNNC) to explore future nuclear plans. While still in early stages, the government expects the nuclear reactors to have a generation capacity of 2.8GW. In the longer term, the Saudi government has discussed ambitions plans to build 16 nuclear reactors over the next 25 years, an investment of more than USD80 billion. As with solar, the Saudi government is leveraging its preexisting international relationships to build the foundation for this industry; the government is working closely with Russia to develop joint energy projects, and a delegation of Saudi leaders went to Argentina for nuclear energy training as part of an agreement formed between the two countries.

THE FUTURE OF OIL

The great irony in Saudi Arabia’s renewable energy efforts is that the future of the nation’s oil industry may well depend on the success of its renewable energy program. The rapid population increase of recent years has strained the Kingdom’s energy grid, forcing the government to draw more energy from burning oil. “Average growth has been around 7-8% for the past three decades,” before shrinking for the first time in 2016, Deputy Minister for Electricity Saleh Alawaji told TBY, and the amount of oil burned for power has risen to 80,000bpd in recent years. After decades of subsidies, the Saudi government raised energy prices to curb demand and is embarking on a crusade to increase efficiency. A study commissioned by the King Abdullah Petroleum Studies and Research Center called increased efficiency critical to the future of the Kingdom’s oil industry, concluding that improving efficiency by 4% a year would save 1 million bpd of crude oil by 2030. With domestic oil consumption continuing to increase at approximately 4% more than the rate of oil production, increasing the supply of renewable energy is more than a societal goal; it’s economically necessary. With a deep roster of renewable investments currently under development, though, it looks like the process of moving to a more sustainable energy future is well underway.