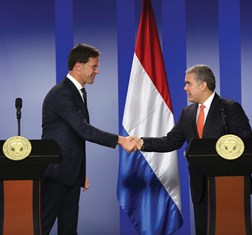 Share on:
Colombia's new government must tread carefully to sustain the will to establish the peace that the country has long yearned for.

Any government assuming office in Colombia inherits the aftermath of the country’s painful five-decade conflict. The new name in the big seat since August 2018 has been Iván Duque, the protégé of erstwhile President Uribe, who in July resigned from his senate seat in the wake of a bribery and fraud investigation at the Supreme Court. Duque, the winning Centro Democrático candidate, with 54% in the June election, is Colombia’s youngest-ever elected leader. He has pledged to prioritize national unity and economic growth. His running mate, Marta Lucí­a Ramirez, is Colombia’s first-ever female vice president.

Whither the Peace Dividend?
On leaving office, President Juan Manuel Santos advised Duque to realize the peace deal with the Revolutionary Armed Forces of Colombia (FARC), negotiated in 2016. Since that date, FARC has metamorphosed into the political party, Revolutionary Alternative Common Force, with several members holding parliamentary seats. Duque, once a lawyer, remains a conservative and seemed keener to dilute the terms of the peace deal, notably concerning the prosecution of guerrillas found guilty of war crimes. Yet, he has also called for healing, which suggests that real politik has a chance of trumping populism. And yet to the mix must be added ongoing turbulence across the border in economically stricken…

…The Lima Group
The 14-nation Lima group including Colombia, Canada, Argentina, Brazil, and Chile, with the sole exception of Mexico, have signed a declaration labeling Maduro’s second term of office “illegitimate” and are calling for Venezuela’s National Assembly to hold power until after democratic elections. Mexico’s leftist President Andres Manuel Lopez Obrador has notably reversed the nation’s formerly dismissive stance toward Maduro.
Most recently, in mid-January 2019, President Duque revealed holding talks with conservative leaders, including Chile’s President Sebastí­an Piñera—a conservative reelected in March 2018—sympathetic to his stance toward Caracas. The idea is to establish a regional bloc to challenge the 12-nation Union of South American Nations (UNASUR) in which Venezuela enjoys influence, the group having been established by previous Venezuelan leader Hugo Chavez, who died in 2013, and other left-leaning leaders in power at the time. Duque has called for its closure.

Geopolitics Manifested
Given UNASUR’s goal of curbing Washington’s influence in Latin American, it is noteworthy that President Duque’s new government has had to rethink Santos’ recognition of the state of Palestine after a formal visit from Washington. At President Trump’s behest, new Foreign Minister Carlos Holmes was quoted explaining that, “Given possible omissions that could come to light about the way in which this decision was taken by the outgoing president, the government will cautiously examine its implications and will act according to international law.” This arguable arm-twisting in matters of state policy was doubtless uncomfortable for the new administration, especially as Palestine is acknowledged as a sovereign state by the UN General Assembly, the International Criminal Court, plus close to 140 countries.

So, Business as Usual?
Colombia’s media has presented Duque as business-friendly. “I want to govern Colombia with unbreakable values and principles,” he insisted during his inauguration, “overcoming the divisions of left and right, overcoming with popular dialogue the prickly feelings that invite social fracture, I want to govern Colombia with a spirit to build, never to destroy.”
Duque, then, is making a bold mark in a country long blighted by violence and he has fostered his image as a level-headed centrist. Recent developments simply underscore the epic effort required to keep Colombia on a steady political keel.