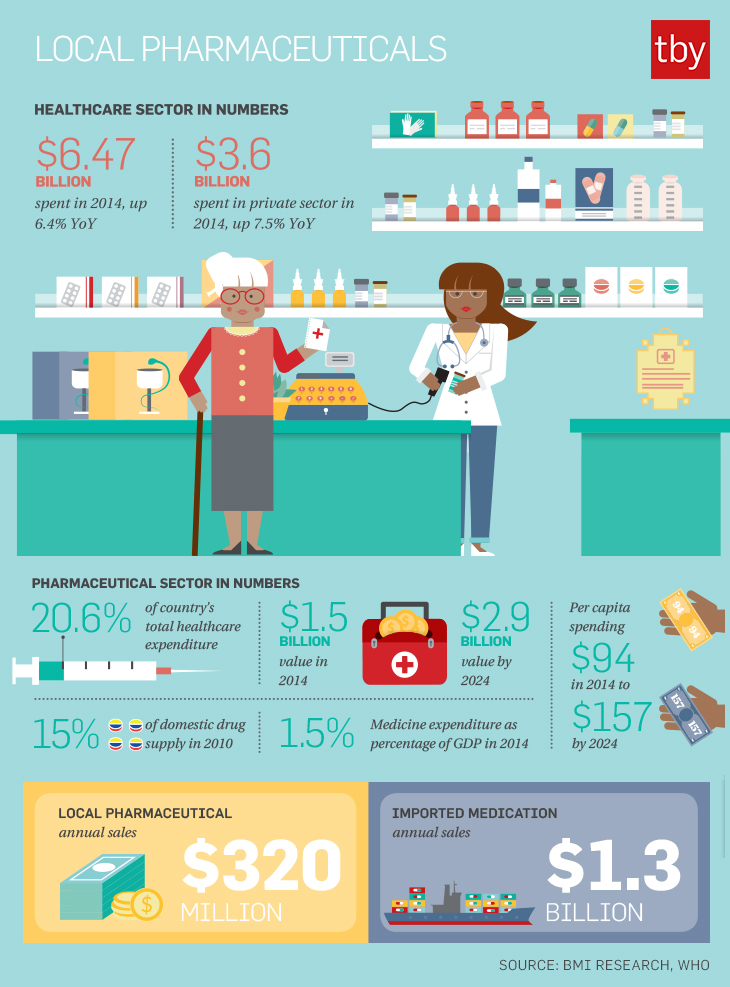 Share on:
Its dependence on imported drugs, an increase in chronic diseases, and government initiatives to attract further foreign investment could make Ecuador a profitable drug-manufacturing center for foreign companies.

Ecuador’s pharmaceutical sector ranks as the tenth largest in Latin America—it is bigger than those in Panama or Jamaica, but smaller than those in Colombia and Mexico, for instance, according to BMI Research. The research group says that the Ecuadorian pharmaceutical industry was worth $1.5 billion in 2014, which is expected to increase to $2.9 billion in the next decade, with per capital spending rising from $94 in 2014 to $157 by 2024.

Medicine expenditure as a percentage of GDP was 1.5% in 2014, and the pharmaceutical market accounted for 20.6% of the country’s total healthcare expenditure. Statistics of the World Health Organization (WHO) show that overall health spending in 2014 had totaled $6.47 billion, having increased by 6.4% YoY. Of this spending, private healthcare accounted for the largest part with $3.6 billion spent in 2014, representing a 7.5% YoY increase.

Domestic pharmaceutical companies supply around a quarter of medications in Ecuador, generating annual sales of $320 million—a stark contrast to imports for medications, which total $1.3 billion, according to Ecuadorian media. Although the disparity between local supply and dependence on imports seems large, the local pharmaceutical sector accounted for 15% of domestic drug supply just four years ago, and has been growing its market share steadily.

As Ecuador’s own drug production abilities are limited, the country depends on imports of patented drugs. This demand—together with favorable tax laws—has already attracted foreign pharmaceutical companies, such as GlaxoSmithKline, Johnson & Johnson, Bayer and AstraZeneca. As the disparity remains, it represents further long-term investment opportunities for foreign companies, research indicates. These opportunities are aided by a growing demand for high-value medication, driven in part by chronic diseases such as diabetes and cancer.

While the government seeks to further attract foreign investment, a December 2014 report by the Economist Intelligence Unit noted that the Ecuadorian pharmaceutical industry is littered with pirated drugs—partly because compliance efforts in the industry are negligent. Since 2009, the government has taken steps to curb this copyrights issue by for instance requiring licenses for drug manufacturing. As of the end of 2014, six drugs—among them those for the treatment of AIDS—required official license holders.

Another issue the sector is facing is healthcare reimbursements. Ecuador’s Social Security System (ESSS), in charge of reimbursements, reportedly consistently failed to issue repayments. It is now undergoing a top-down restructuring as stipulated by President Rafael Correa, who accuses the ESSS of financial mismanagement. In the meantime, only a minority of people actually receives reimbursements, media claim. A cross-border health care system agreement in 2012 with Peru was meant to mitigate the lack of reimbursements. Ecuadorian citizens could theoretically seek medical care and reimbursement in Peru. However, according to a 2014 study by a Pan-American health journal Panam Salud Publica, most such healthcare tourists pay for their treatments in Peru anyway; leaving Ecuador’s reimbursement issue an obstacle to tackle.

Another concern in the market has been the rise of medicine prices. In 2014, the government introduced price regulations to curb price increases; and to decrease current prices by around 30%, according to BMI Research. For instance, according to Panam Salud Publica, the price for patented drugs increased by 12.5% in the five years to 2014. The government also established a watchdog, the National Council for Fixing and Reviewing Medicine Prices, which will regulate the cost for medicines in future.

Despite its weaknesses, data by the WHO and BMI indicates that Ecuador’s pharmaceutical sector is set to grow, with healthcare expenditure reaching $8.6 billion within the next five years. This, research indicates, provides prolific commercial opportunities for foreign firms.