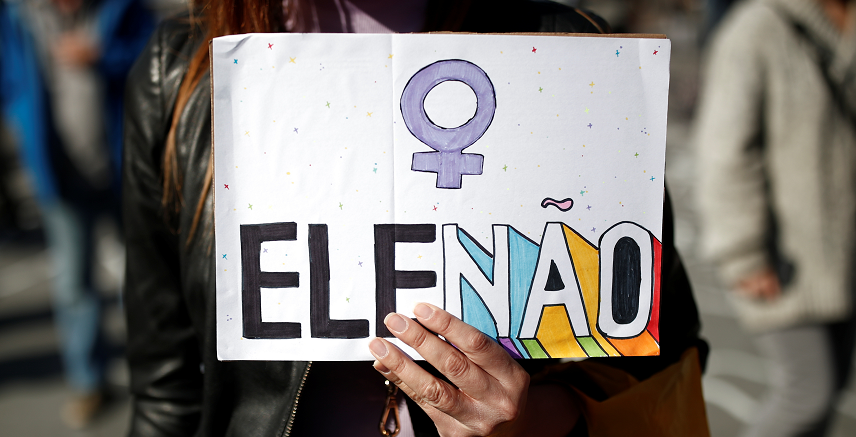 Republic in the Balance

Share on:
Brazilians decide between a would-be Duterte and a soft-spoken philosophy professor from a tarnished party.

A woman raises a placard reading “EleNao” during a rally against the gender-based and sexual violence against women, in Paris, France September 29, 2018. REUTERS/Benoit Tessier

With the Brazilian real down 20% on last year and violent crime at all-time records, tensions are running especially high in the lead up to Sunday’s first round presidential run-off in Brazil.

Amidst this backdrop of mounting violence and economic stagnation has been a series of nonstop political crises since early 2016 that have seen the impeachment of one president, Dilma Rousseff, in a ‘soft constitutional coup’ in August 2016, and the imprisonment of another, Lula da Silva, in April of this year.

Convicted of money laundering and ‘passive corruption’ charges, Lula turned himself into the authorities in April, but continued to contest the presidency throughout the rest of spring and summer.

Holding forth at nearly 40% of voter intention, he was far and away the favorite to win October’s historic race before Brazil’s Superior Electoral Court struck down his candidacy once and for all on August 31.

Citing the country’s “Clean Record” mandate, passed during Lula’s presidency in 2010, the law bars candidates that have been impeached or convicted from running for office for eight years.

Though not unexpected, the decision sent shockwaves through the Brazilian political spectrum, further raising the prospect that Jair Bolsonaro, the ‘Trump of the Tropics’ and Lula’s runner up in the polls, might now carry the day.

To call Bolsonaro controversial is an understatement of the first order.

A congressman from the right-wing Social Liberal Party, the fiery-tongued former army captain not only openly longs for the ‘order’ of the days of the military dictatorship (1964-1985); he has also been charged with discrimination and inciting hatred against women and minorities on multiple occasions since first being elected to Brazil’s Chamber of Deputies in 1991.

In just April of this year, he narrowly escaped conviction from the country’s prosecutor general for suggesting in a 2017 Rio de Janeiro speech that the descendants of runaway slaves in Brazil were fat and useless and “not fit for procreation.”

As for solving crime, Bolsonaro has repeatedly claimed that police should be given free range to kill criminals. “If he kills 10, 15, or 20 with 10 or 30 bullets each,” the candidate said on TV Globo’s nightly news program, “he needs to get a medal and not be prosecuted.”

Apart from suggesting convicted rapists be chemically castrated, he once told Playboy Brazil that should one of his sons be homosexual, “I would rather [he] died.”

Though Catholic himself, Bolsonaro has latched onto many of the sensitive themes that rile up millions of Brazil’s culturally conservative evangelical Christians.

Promising to roll back LGBT rights, the most popular deputy in Rio de Janeiro took special care to be baptized by a fellow Brazilian lawmaker and evangelical preacher in the River Jordan on a 2016 trip to Israel.

As for the fairer sex, Bolsonaro has largely biblical plans. In 2015 he told an interviewer from Zero Hora that not only should men and women not receive equal pay, but that maternity leave should be curbed to increase economic productivity.

In his biggest breach of moral probity to date, in 2015 he was fined USD2,500 by a federal judge for comments about fellow congressperson and former human rights minister Maria do Rosario.

After she accused the thrice-married man of being a sexual predator, he yelled at her on the floor of congress: “I won’t rape you because you don’t deserve it.”

Tough talk for tough times, say his defenders: Brazil is at war—and needs a savior. Certain evangelical leaders have even pointed to the candidate’s middle name, Messias, Portuguese for “messiah,” as further evidence he’s their man.

All things considered, murders in Brazil have exceeded those of Syria every year since 2015.

Reap what you sow

Set against this background, some despairing voters might almost be forgiven for putting their faith in winner-take-all solutions. But the gamut of extrajudicial justice can go both ways.

On September 6, less than a week after Lula was barred from contesting this Sunday’s election, Bolsonaro was stabbed in the abdomen while campaigning in Minas Gerais, a southeastern state that borders both Rio and São Paulo.

The suspect, a civilian, claimed he was “on a mission from God,” a statement with which many of the candidate’s most ardent supporters now seem to agree, given the sympathy points it has since garnered.
According to Bolsonaro’s son Flavio, a deputy in the state parliament of Rio who is running for senate on Sunday, the stabbing represents “a message to these bandits…. [that] you just elected the president.”

Polling at 19% in late August, the figure now stands at 31%, first by ten points in a tight race of five major contenders.

More importantly, he is now being spared many of the easy ad hominem attacks that would surely have been made against a candidate whom 46% of electors strongly disapprove of.

Indeed, his opponents have so far shown a remarkable degree of magnanimity.

For a man who once claimed that Pinochet hadn’t killed enough people, there is scant evidence the army captain who dedicated his impeachment vote against President Rousseff to the memory of convicted army torturer Carlos Alberto Brilhante Ustra would have been nearly so generous.

A rock and a violent place

Nonetheless, nipping at Bolsonaro’s heels is Fernando Haddad, the Worker’s Party (PT) replacement candidate for Lula, with 21% of voter intention in the latest polls.

A lawyer, philosopher, and former mayor of São Paulo (2013-2017), Haddad has surged 5% in the past two weeks alone. Though he lacks Lula’s popular charisma, the soft-spoken 55-year old former philosophy professor is what much of the world is now calling “the man standing between Brazil and authoritarianism.”

Coming in at third with 11% is Ciro Gomes, a 60-year old lawyer, academic, and former mayor of Fortaleza and finance minister whose small Democratic Labor Party was eclipsed as the major leftist force in Brazilian politics by the Worker’s Party in the 1980s. Though Gomes won more than 10 million votes in the 2002 presidential election (12%), he likely scared off just as many more with proclamations such as “I don’t give a damn about the market.”

In fourth place is business-friendly candidate Geraldo Alckmin, far and away the market’s favorite. Though a little lackluster at 10% of voter intention, the former governor of São Paulo state is credited with vastly lowering the murder rate there, now the lowest in the country. He also remains the choice of pick of industrialists across the land.

Rounding out the leading contenders is Marina Silva, the activist, environmentalist, and sole Afro-Brazilian—a demographic to which over half of Brazilians now belong— in Sunday’s contest. The only female contender, for much of the summer she was thought to be the second-most popular candidate in the running, but has plummeted in the polls from 12% to 5% in recent weeks.

Though the evangelical Christian took home 22 million votes (21.3%) in 2014 on the most successful Green party ticket in Brazilian history, she has failed to rally the troops in the wake of Lula’s departure, an opening many analysts thought would give her a boost.

With 4% approval and 79% disapproval ratings, Brazil’s incumbent president Michel Temer is arguably the most unpopular leader in the world, especially now that South Africa’s Jacob Zuma has stepped down.

But as he loses favor, so too does the center-right that governed with him since they ousted Rousseff in August 2016—chiefly, the Party of Brazilian Social Democracy.

Mainstream conservatives’ failure to govern or jumpstart the economy since then is as much a reason as any for the success of Bolsonaro’s frenetic authoritarianism.

With Bolsonaro and Haddad expected to make it to the second-round run-off on October 28, there is still a chance the latter can carry the day.

Polls from Monday, a day after hundreds of thousands of women took to the streets to demonstrate against Bolsonaro under the banner #EleNao (“not him”), show the professor neck-in-neck with the army captain at 42% a piece.

Moreover, having alienated women, the LGBT community, Afro-Brazilians, indigenous groups, and progressives of every stripe, Bolsonaro will need an extraordinarily high turnout of likeminded electors to carry the day.
With 11% of voters already planning to cast a blank ballot—the country’s highest such rate in 16 years—the onus is on Haddad to get them out.

That much of the country is still deeply frustrated with his Worker’s Party remains his biggest weakness. He risks not convincing them otherwise at his—and his country’s—peril.