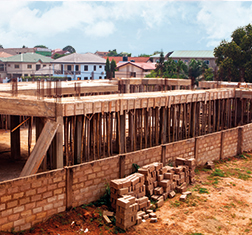 If You Build It

Share on:
While the government remains the main investors for infrastructure, transportation, schools, and hospitals, private investment in the construction sector is on the rise, particularly in the retail segment.

Of Ghana’s total population, 51.9% live in urban areas, and of the 25.75 million inhabitants, 1.65 million reside in Accra, according to the CIA Factbook. The rapidly growing economy and urbanization is putting pressure on the construction sector, and in turn the development of transportation infrastructure, utilities, and energy systems, as well as a rising need for construction materials necessary to support new building projects. Ghanaians are already feeling the squeeze—traffic congestions, beleaguered social systems, environmental degradation, electricity fluctuations, and growing economic inequality all pose challenges to the construction sector to implement a sustainable growth plan as the economy continues to expand. The country suffers from a housing deficit of 1.7 million units, and the United Nations Human Settlement Program estimates that by 2020 that deficit will reach 20 million units.

The discovery of oil in 2007 has had a dramatic effect on the economy, and the construction sector in particular, as the growing middle class has sparked a shift in consumer habit’s and demand for shopping malls. Many international brands have entered the Ghanaian retail market, and the construction of retail space has struggled to keep up with the rapidly growing demand. At 27,000sqm, West Hills Mall is the largest single-phase modern shopping mall in Accra. Construction began in December 2012 and the mall was opened in October 2014. The developers, Atterbury Group, have announced a second phase for the mall that will add an additional 27,700sqm and be completed in 2017. Atterbury Group’s most recently completed project in Ghana is the $60 million Achimota Retail Center in northeastern Accra, at 15,000sqm. According to KPMG, retail space in the capital will double over two years from the current 93,000sqm, and a total of 250,000sqm will be under development over the next three years.
Outside of retail, construction activity is on the rise in the gas sector, and another main source of potential for construction projects is transportation infrastructure, particularly building new roads and maintaining old ones. Over the next 25 years, Ghana will require an annual $1 billion to resolve the country’s road infrastructure deficit, informs CEO of First Sky Ltd. Eric Seddy Kutortse, as 50-55% of roads are in poor condition.

In 2014, the sector contributed 12.3% to the overall GDP compared to 8.8% in 2009, employed nearly 10% of the working population, and has had made a significant contribution to industries such as cement, paint, steel, chemicals, timber, and earth movement equipment, as well as Ghana’s other most active sectors such as mining, quarrying, and hydroelectricity. Construction is one of the fastest growing sectors in the economy, growing at an average rate of 7-8% per year, reaching 8.6% in 2013, according to the Ghana Statistical Service. Construction’s contribution to the total GDP in 2014 was $3.341 billion (GHS13.327 billion), a 23.8% increase from $2.699 billion (GHS10.765 billion) in 2013. Between 1998 and 2011 the construction sector’s average credit grew by 35.7%. Fortunately, there is no shortage of qualified human capital for building the country’s roads, as the government and private sector alike have made significant investments in technical training for construction, according to Kutortse.
Building costs
KPMG pegs Ghana and Kenya among the least costly states in Africa to build, with Accra and Nairobi having almost identical estimates for the cost of constructing affordable housing and budget hotels. In the residential segment in Accra, low-cost housing costs an average $240 per sqm to build, a standard private dwelling costs $490 per sqm, a luxury private dwelling costs $820 per sqm, and exclusive private buildings have an average building cost of $1,220 per sqm. For hotels, three-star budget hotels in the capital cost $81,000 per key, $144,000 per key for four-star/mid-scale hotels, and for five-star/luxury hotels each key costs $254,000. Building costs for office space in Accra start at $665 per sqm in the low-rise standard office segment, $1,050 per sqm in the low-rise prestigious office segment as well as high-rise standard tower blocks, and $1,310 per sqm for high-rise prestigious tower blocks. In retail, buildings costs in the district center of Accra average $740 per sqm and $1,015 in the regional center. Structured parking building costs an average $375 per sqm, $390 per sqm for semi-basement parking, and $480 per sqm for basement parking in Accra.

Producers of construction material play a key role to the sector, and cement companies such as Ghacem, Diamond, and Dangote have all shown increases in production over the last decade. Dangote is upgrading their terminal at the port of Tema to increase its capacity to 1 million tons of bulk cement per year, and in 2016 the company plans to open a 1.5mt grinding plant at Takordi, where it will grind Nigerian clinker. Ghacem, founded by government of Ghana with Norcem AS of Norway, is the country’s largest cement producer, having produced over 30 million tons of cement since its inception in 1967 from its factories in Tema and Takoradi. Diamond Cement’s factory in the Volta Region started production in 2002 with a 700,000-ton annual production. Ghana imports six million tons of cement per year, and has little domestic limestone resources.
A major challenge facing construction projects in remote regions of the country is the lack of equipment and building materials such as cement, bitumen, asphalt, and iron, as the industry is centralized around the capital. “When machines break down and need maintenance, repairs, and spare parts, we again have to go back to Accra. We were 600km into the hinterland and we had to come back to Accra to get our construction inputs, repair equipment, buy more materials, and then transport it all back to the project,” describes First Sky’s Kutortse. He proposes quarries be established in the northern part of the country to cut costs and support road projects such as the reconstruction of 20km of the Have-Kpando Road, and the 47km upgrade of the Kete-Krachi-Buya Road.

There is no single government agency responsible for the management and development of the construction industry. Industry players and analysts have long advocated for a central body to meet the challenges facing the construction sector and the infrastructure gap. Until then, segments of the sector are under the purview of various industries, though the Ministry of Roads and Transport and the Ministry of Water Resources, Works, and Housing play the largest role of client and regulator for the country’s construction projects. Though private domestic investment is growing, the government and state-owned enterprises are still the main investors in construction projects, often with loans from development partners.

The annual budget statement complied by Ghana’s Ministry of Finance detailed the country’s most vital construction projects spearheaded by various ministries. In 2015, the Ministry of Roads and Highways executed a total of 67km of works on trunk roads and 25km of development works on urban road networks. About 200km of trunk roads and 40km of urban roads will be constructed in 2016. With government funding, 100 schools were built, while 23 schools were constructed by the World Bank. In the Central region, the government initiated the construction of 10 polyclinics, and five polyclinics in Accra, which will continue in 2016. Construction of the water treatment plant at Kumawu and Konongo is ongoing under the Ministry of Water Resources, Works, and Housing, Government. Phase II of the construction of 368 housing units for the security services will also continue in 2016. Construction of 5,000 affordable housing units will continue in 2016, phase I a 1,502 housing unit project will be completed in 2016, and there are 4,720 government affordable housing units at various stages of completion in the greater Accra, Ashanti, Northern, Upper West, and Eastern regions. According to KPMG, the government also recently asked American company Chesterfield Faring to prepare a request for proposals to build an elected light rail mass transit commuter system, to connect 185,000sqm of newly developed regions to the Kotoka International Airport in Accra.