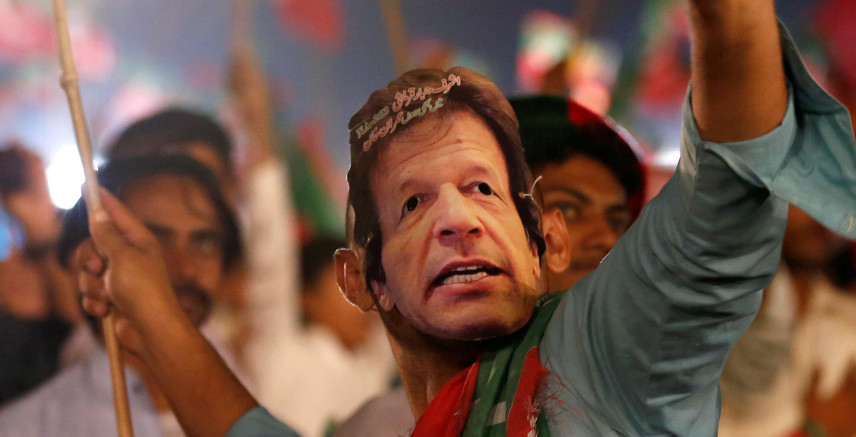 Pakistan’s links with its neighbor

Share on:
Though critical of his predecessor’s dealings with China, Imran Khan’s premiership is off to a rollickingly good start with Beijing. How long can the honeymoon last?

A supporter of Imran Khan, chairman of the Pakistan Tehreek-e-Insaf (PTI), political party, wears a mask and dance on party songs during a campaign rally ahead of general elections in Karachi, Pakistan July 22, 2018. REUTERS/Akhtar Soomro

Finally at the pinnacle of Pakistani politics after two decades of flustering effort, Imran Khan now faces the heavy burden of every democratic politician: living up to expectations.

Indeed, after a diverse career in which he’s not only promised to be all things to all men, but often been them, Khan is used to firing the wide range of salvos needed to get votes in diverse constituencies.

Now with a clear but fragile mandate—his Tehreek-e-Insaf (PTI), i.e. Movement for Justice, holds slightly under half the seats in the National Assembly—the politician long forgiven for his numerous ideological “U-turns” may have to stick closer to the straight and narrow if he’s to keep his 16.8 million electors from experiencing buyer’s remorse.

On record as a fierce critic of both—the former for the ‘butchery’ of its drone strikes and ‘liberals thirsty for blood,’ the latter for the lack of transparency in the deals his predecessor Nawaz Sharif signed in relation to the China-Pakistan Economic Corridor (CPEC)—Khan has been quick to extend a hand to the Chinese in particular since his election.

In contrast to any cuddling up to the Americans, throwing a rhetorical bone to Beijing is not only good politics—it’s good economics.

Hand on the wallet

Two days after the election, China extended an additional USD2 billion loan to Islamabad to shore up its falling foreign currency reserves, which had slipped to USD9 billion by July 20.

Giving the rupee its biggest jump in nearly a decade, this brought the amount of Chinese loans to Pakistan to USD6.2 billion over the past 13 months, nearly the equivalent of what it received from the IMF over the same period, Bloomberg reported.

Not surprisingly, Khan’s gratitude was not long in coming.

Promising to strengthen relations with China in his victory speech, on July 27 the PTI made its inaugural tweet in Mandarin: “We want to work towards the success of CPEC. We also want to send teams to learn poverty alleviation from China. How to lift our most poor who can’t even eat two meals a day.”
In a tweet later that day, Khan threw down the gauntlet even further: “The second thing we can learn from China is how they curbed corruption and set the example that corruption does not pay.”
For a country that has nabbed over 1.3 million officials, both big and small, since 2012—and whose ‘elite’ prisons are now overflowing—the implication is cutthroat and clear.

A friend for all seasons

Suffice to say, these statements were eaten up by the Chinese. First was the Chinese embassy representative in Islamabad who referred to Pakistan as his country’s ‘all-weather friend;’ second were the countless mouthpieces such as the state-backed Global Times, whose editorials railed against the ‘Western hype’ that Khan had his own reservations about the USD60 billion CPEC project.

In a later editorial, the paper drove home the point even further. Claiming that Khan’s “politico-economic views do not seem to be influenced by his Western education,” the Global Daily not only stressed that Khan “questions the practicality of capitalist economic policies,” but claimed his broader political project was “a clear pivot by Pakistan, away from the US orbit and further into the Chinese bloc.”

Whether Khan himself would articulate such a sweeping sentiment is unlikely. For starters, the US is already on edge over Khan’s perceived coziness to China, with US Secretary of State Pompeo stating that Washington would block any IMF bailout merely used to pay off Chinese loans. He does not want to push it any further.
Yet since money is fungible and Pakistan’s up to its eyes in debt, how much of a difference does it make?

Rumors are already circulating that Pakistan will use nearly half (USD5 billion) of an expected USD12 billion IMF bailout package to simply pay off previous IMF loans, according to statements from the country’s caretaker foreign minister, Abdullah Hussein Haroon.

And China’s far from the country’s only ‘historic friend,’ as the Chinese mouthpiece likes to refer to Islamabad. On July 29, but four days after the election, the Saudi-based Islamic Development Bank (IDB) activated a three-year USD4.5 billion credit facility for Pakistan’s oil industry that will also help stabilize the rupee-dollar exchange rate.

While the Chinese and Saudi loans give the PTI much-needed breathing room, the country is still likely to turn to the IMF any day now.

In return for shoring up its rocky economy, the DC-based body will almost certainly push for the very ‘structural reforms’—i.e. reducing subsidies and raising taxes—that fly in the face of Khan’s promised ‘Islamic welfare state.’

Though ‘the clear pivot to the Chinese bloc’ has far from materialized, the fact that Chinese patronage comes with less immediate or visible strings attached will be a strong deciding factor in Khan’s premiership.
The onus is now on the US to convince him otherwise.