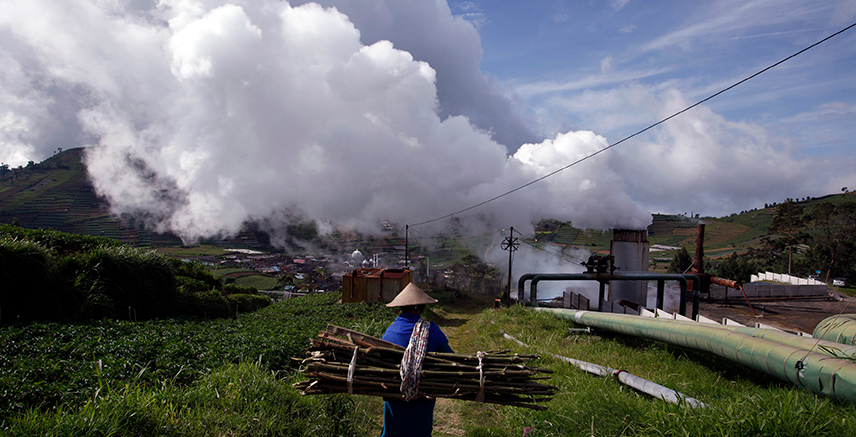 Heat of the Moment

Share on:
Indonesia is projected to become the world's biggest producer of power from geothermal energy by 2021.

Last week, Ignasius Jonan, Minister of Energy and Mineral Resources of Indonesia, stated that the Southeast Asian nation will lead the planet in harnessing geothermal power sources for power generation within the next five years.

In a country battling with power shortages, this potential turnaround would have a transformative effect on the lives of millions of Indonesians, as well as going a long way to protect its environment.

Indonesia is the world’s third most prolific producer of geothermal electricity after the US, which produces 25% of the global total, and neighboring Philippines in second place.

The volcanic nation boasts a net geothermal capacity of around 1.7GW. It is estimated that this corresponds to only 10% of available reserves in country, which are spread across its countless islands.

According to the Ministry’s figures, within the next five years over 2GW of new geothermal power generation will come online, with new projects like the Sarulla, Karaha, Sorik Marapi, and Lumut Balai power plants already underway.

Indonesia should take over the Philippines as the world’s number two producer as early as 2018.
By 2021 it should have an installed capacity of 3.56GW, and plans to eventually reach 9.5GW of power generation from geothermal sources by 2025.

The government seems serious in its objectives. Almost at the same time as the Minister’s announcement it was reported that USD640 million had been released to the national electricity company Perusahaan Listrik Negara (PT PLN) for the development of six geothermal projects to add up to 160MW of capacity to the national grid.
It represents a strong step in the government’s commitment to reach its target of 23% of renewable energy in its power generation mix by 2025.

The national utility is now charged with finding appropriate areas for the development of geothermal generation across the country.

Those endeavors might be helped by new systems as well.

Just last month, the Asian Development Bank (ADB) released a study describing a pilot project being developed on the island of Bali related to geothermal potential. Using Geographic Information System (GIS)-based decision support systems (DSS), the study used Bali as study ground for the assessment of the technology as a tool for evaluating an area’s potential for renewable energy-based power generation, including solar, wind, biomass, hydropower, and geothermal.

In all, 329MW of potential geothermal supplies were discovered across the regions of Tabanan, Bangli, and Buleleng, which, if harnessed, could contribute considerably to addressing the island’s issues with power supply reliability.

While the study does not address the economic feasibility of these reserves, nor the types of incentives necessary to attract investors, it offers an important tool for the government as geothermal power gathers greater relevance for the nation’s future.

Another challenge, however, looms in the horizon. Despite geothermal power’s potential to solve many of the country’s energy challenges, prior projects had faced substantial popular disapproval.

In Bali, for instance, local authorities and communities strongly opposed any such developments. Most notably, the Bedugul geothermal power plant promoted by PT PLN has been shut down since 2005 having met with harsh local opposition.

An attempt to revive the project in 2015 again failed.

The local authorities and population oppose the project because it would be situated in a portion of protected forest of significant religious relevance to the local community. Despite the clean and relatively safe nature of geothermal technology, authorities still prefer to find alternative sources of power to overcome the island’s challenges.

Careless work on other projects has also contributed to a popular perception that this technology can be damaging. The construction of the Baturaden geothermal plant in Jakarta, for instance, is largely believed to have caused pollution in the Prukut River.

Though undeterred by these trials, authorities will need to be aware of both financial and social feasibility issues before moving forward with new developments. For the moment, however, Indonesia seems strongly bound to its environmental commitments. By overcoming its power generation problems using renewable resources it is taking another key step toward breaking away from fossil fuel dominance.