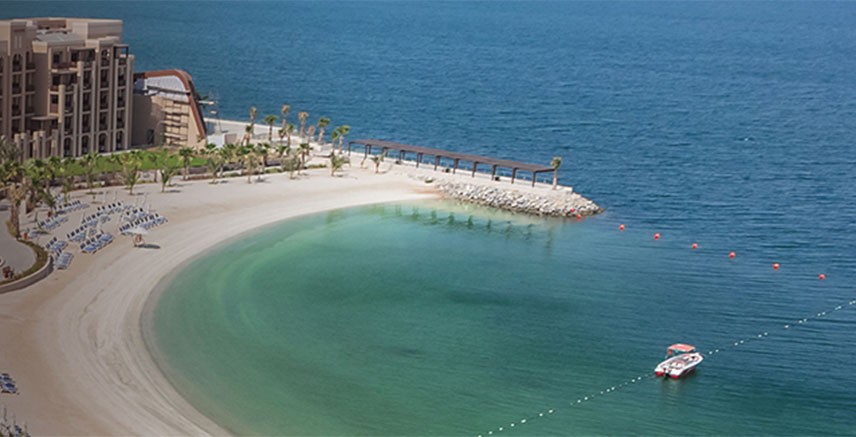 Share on:
Al Marjan Island's unique investment offering and high RoI is set to rival similar projects across the UAE.

HH Sheikh Saud bin Saqr Al Qasimi envisioned a megaproject of his own, one that would set the Emirate apart. Covering an area of 2.7 million sqm, Al Marjan Island extends 4.5km out to sea. It is composed of four man-made islands that will host hotels, resorts, luxurious waterfront homes, restaurants, leading international retail brands, and sport and recreational facilities.

Al Marjan Island is already home to three of the 19 hotels in Ras Al Khaimah, namely Rixos Bab Al Bahr, Double Tree by Hilton, and Marjan Island Resort and Spa. Unfortunately, other projects that were expected to happen were cancelled amidst the global downturn. The Real Madrid Resort Island, a $1 billion project that was announced in 2012, was dismissed a year later due to a lack of funding. Likewise, the Boris Becker Beach Resort & Tennis Academy, a $817 million partly solar-powered project announced in 2008, did not go forward.

However, the success stories of the aforementioned hotels have attracted the likes of investors from the local market as well as the GCC, Russia, and India, amongst others. Diamonds International Corporation, a Czech diamond trading company, will start the construction of a Dh500 million project in 2016. The project, which includes a 300-room five-star hotel, 340 residential apartments, and 40 water villas, is set for completion in three years. Furthermore, April 2016 saw the announcement of another two hotels that will join the unique coral-shaped island. Mövenpick Hotels & Resorts will develop 450 rooms, 120 residences, and 70 apartments and villas, as well as restaurants, cafes, entertainment attractions and fitness facilities. In addition to that, the luxury five-star hotel SuperCasa will develop 320 beach-front rooms, a pool, spa, gym facilities, and four dining facilities across 75,000 sqft. The latter expects to start construction in 4Q2016 and be operational by 2018.

Each of the islands aims to attract its own kind of visitors. Breeze Island, the gateway into Al Marjan, merges luxury and nature through a 2,000m corniche and two high-end hotels, Rixos Bab Al Bahr and Hilton’s Double Tree. In September 2015, the first phase of the corniche project was completed, creating 3.5km of cycling and pedestrian track along the waterfront extending up to Al Hamra Village. The corniche connects the island’s entrance with the proposed Food & Beverage Boardwalk, making it one of the hottest projects for F&B brands.

Dream Island will focus on entertainment such as beach clubs and festivals and signature hotels. The island is hoping to attract music lovers from the UAE and around the world, by bringing music festivals. In line with this vision, Ras Al Khaimah Tourism Development Authority (RAK TDA) hosted Destination Dawn in May 2016, the first 12-hour music festival with international DJs at Al Marjan Island. Treasure Island, host to Marjan Island Resort & Spa, is focused on family entertainment, while View Island has the best of all while enjoying 360-degree views.

There are still plenty of opportunities in Al Marjan Island. Efforts are being taken to secure investment from countries such as China, Germany, the UK, Switzerland, Sweden, and Italy. The island’s unique investment environment offers 0% personal and income tax, no foreign exchange controls, 100% foreign ownership and repatriation of capital and profits, as well as 100% ready infrastructure and utilities. Furthermore, it offers a residency visa for homeowners. According to Colliers, Al Marjan Island offers similar RoI to Palm Jumeirah in Dubai or Saadiyat Island in Abu Dhabi despite being situated in an emerging destination.

More projects are to be announced in the next months and the development of Al Marjan Island will help fulfill Ras Al Khaimah’s objective to attract one million visitors to the Emirate by the end of 2018 and increased tourism revenues to AED4 billion.